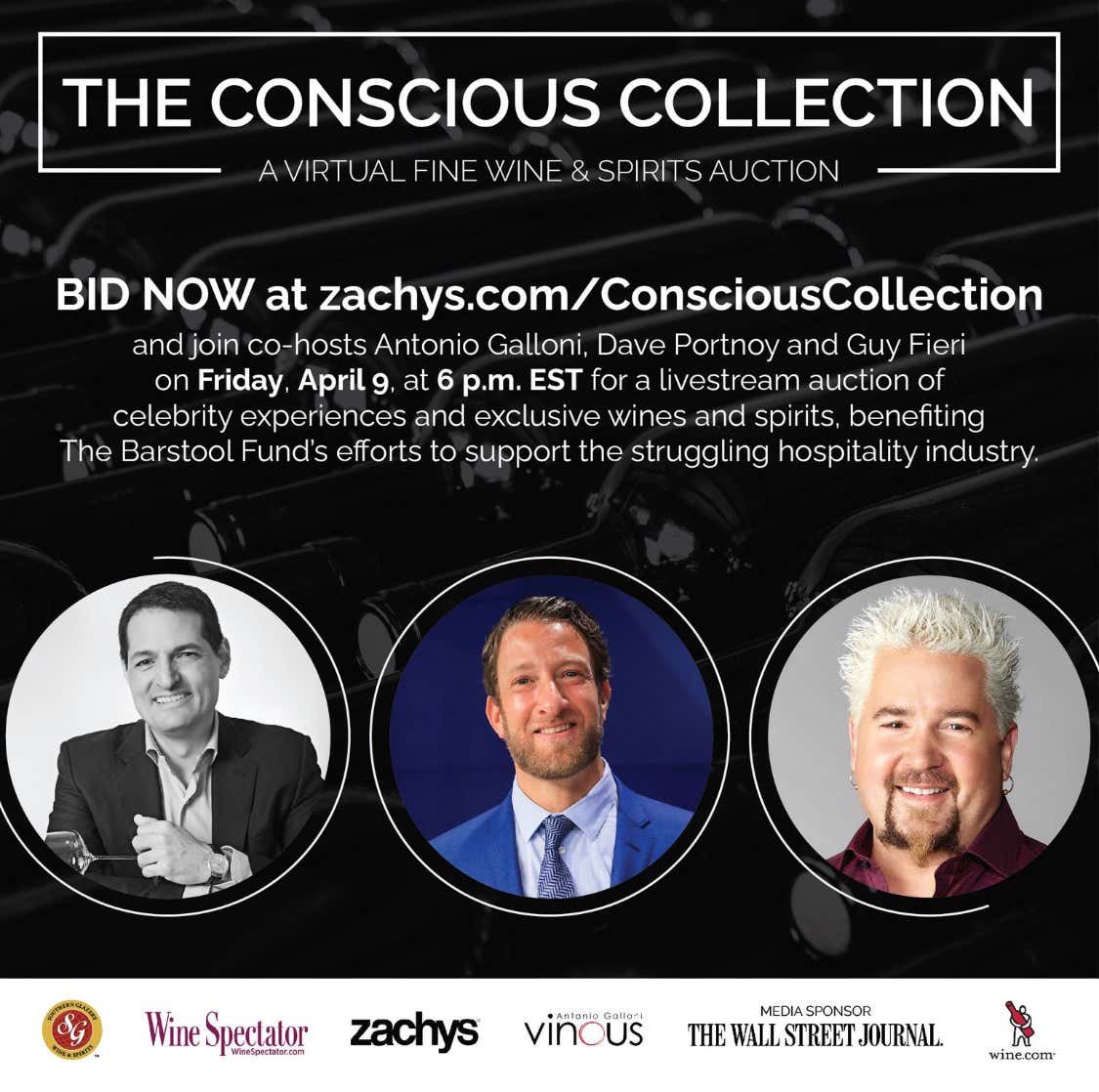 Reminder that bidding is now open for tomorrow night’s virtual auction benefitting The Barstool Fund.  It’s going to be live streamed at 6 PM ET on here and the Zachys website, which is where you can do your bidding.  It’s open now and will finish at the end of the livestream.   There’s over 100 lots available.  Everything from rare wines to luxurious vacations to dinner with Matt Damon or Mary J Blige to touring Barstool HQ with me and watching a pizza review.   No big deal but my experience currently has the highest bid of all lots.

Myself, the Mayor of Flavortown, and wine expert Antonio Galloni will be hosting. Partnering with Guy was a no brainer.  He has also raised millions for small business and we want to keep the momentum coming.  The Barstool Fund has already raised over $37 million and supported over 330 small businesses but there’s plenty of more emotional Facetime calls to be made.  Here’s a way for you to help and also potentially get some once in a lifetime experiences.

These are just a few of the lots up for grabs. You can see the full list and bid on Zachys

Still the cream of the crop.  No big deal but this currently has the highest bid of all 105 lots.  Actually tied now with a 3 night stay in Tuscany for 10-12 people. Decent company. Here you'll get a tour of Barstool HQ and come with me for a pizza review.  Pretty surreal that we have people bidding $55,000 for this when there's also experiences up for grabs with bonafide A-list celebrities but as far as I know nobody else on the list is a Triple Crown winner who has survived 3 bee stings. 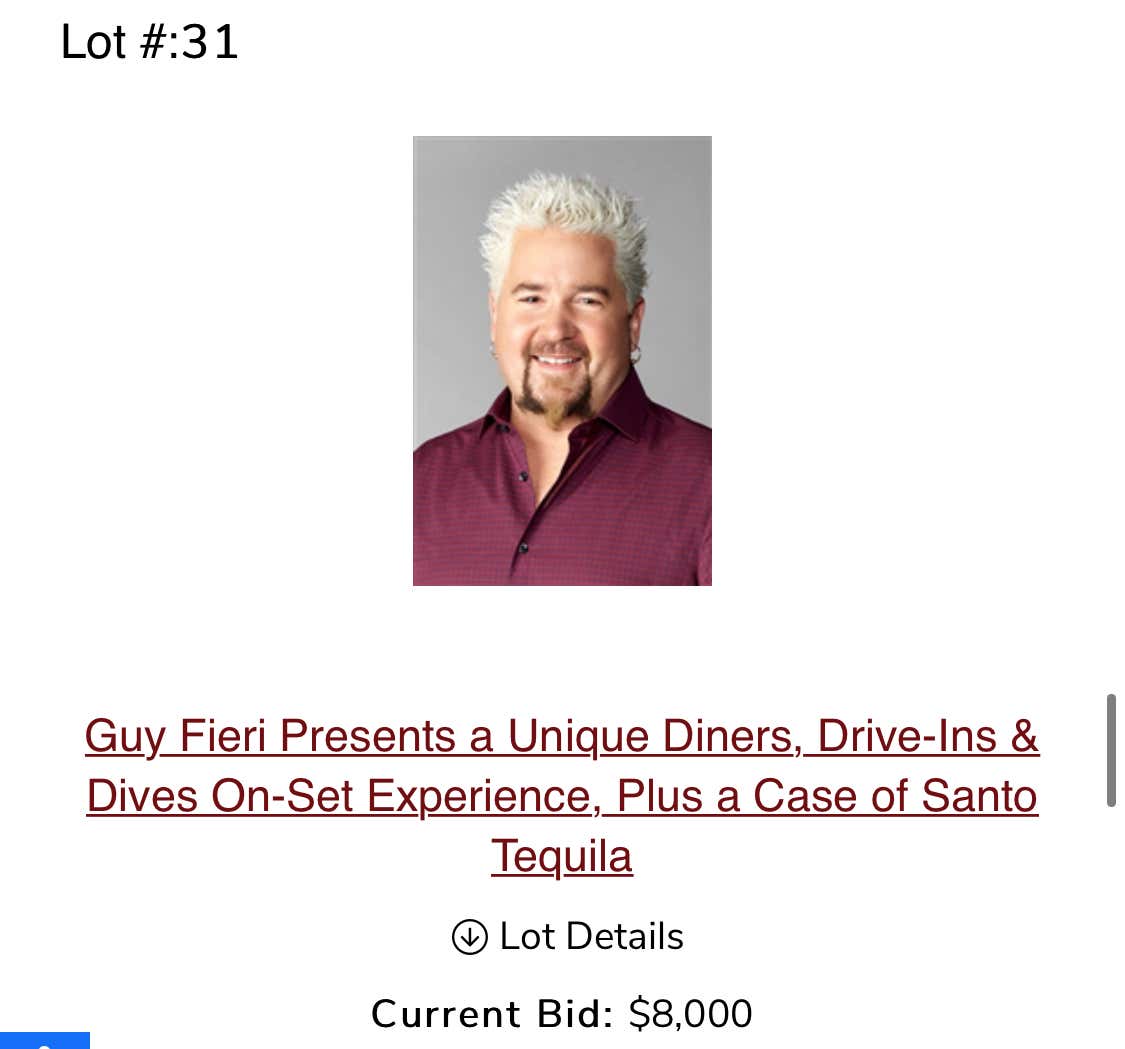 Guy also has an experience up for grabs and this bid should be a lot higher.  You and a guest get a VIP visit to the set of Guy Fieri filming Diners, Drive-Ins & Dives.  Guaranteed an electric showing from Guy and I would assume some incredible food 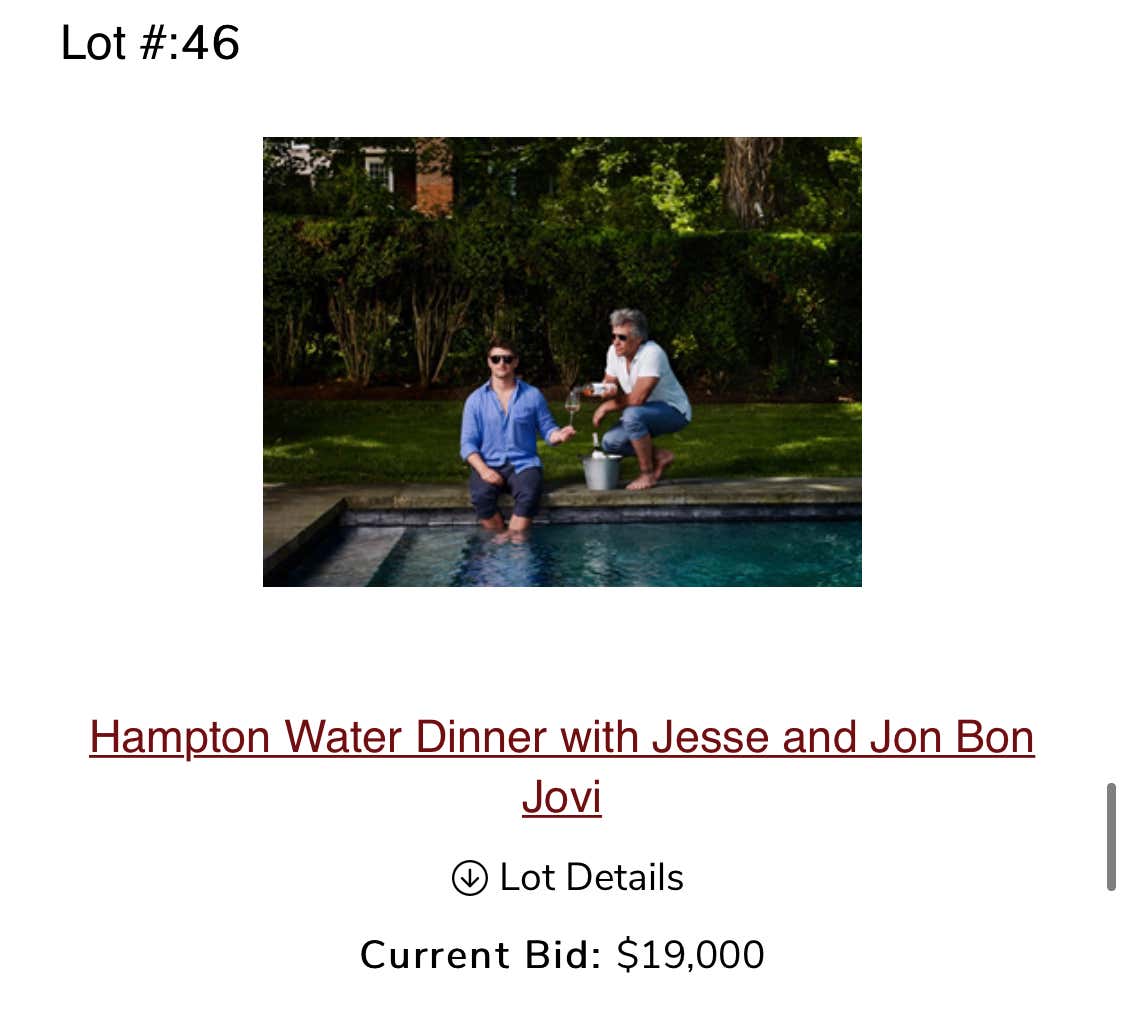 Also up for grabs is dinner with my good friend Jon Bon Jovi and his son Jesse.  You and 9 guests meet them at the Blue Parrot in East Hampton.  He's a huge Patriots fan which is an added bonus. 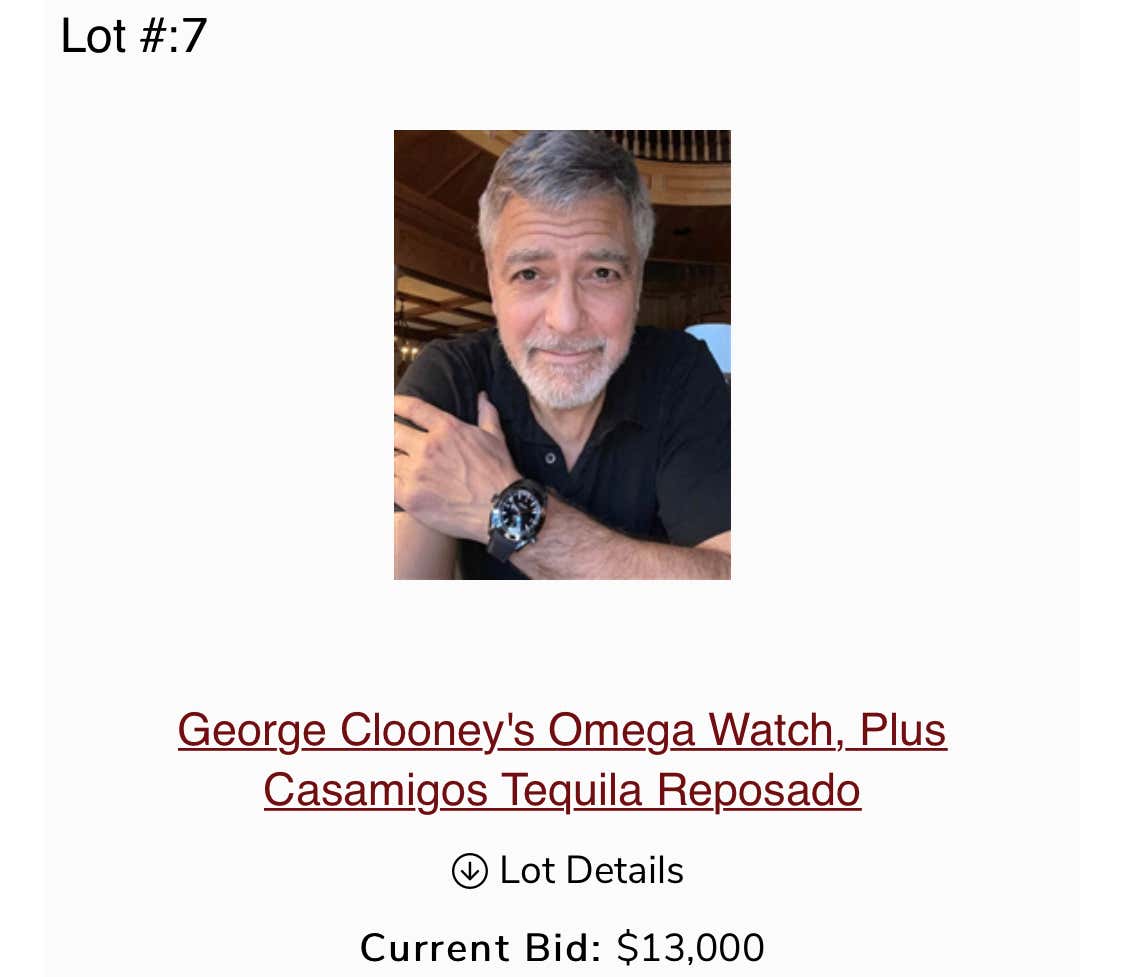 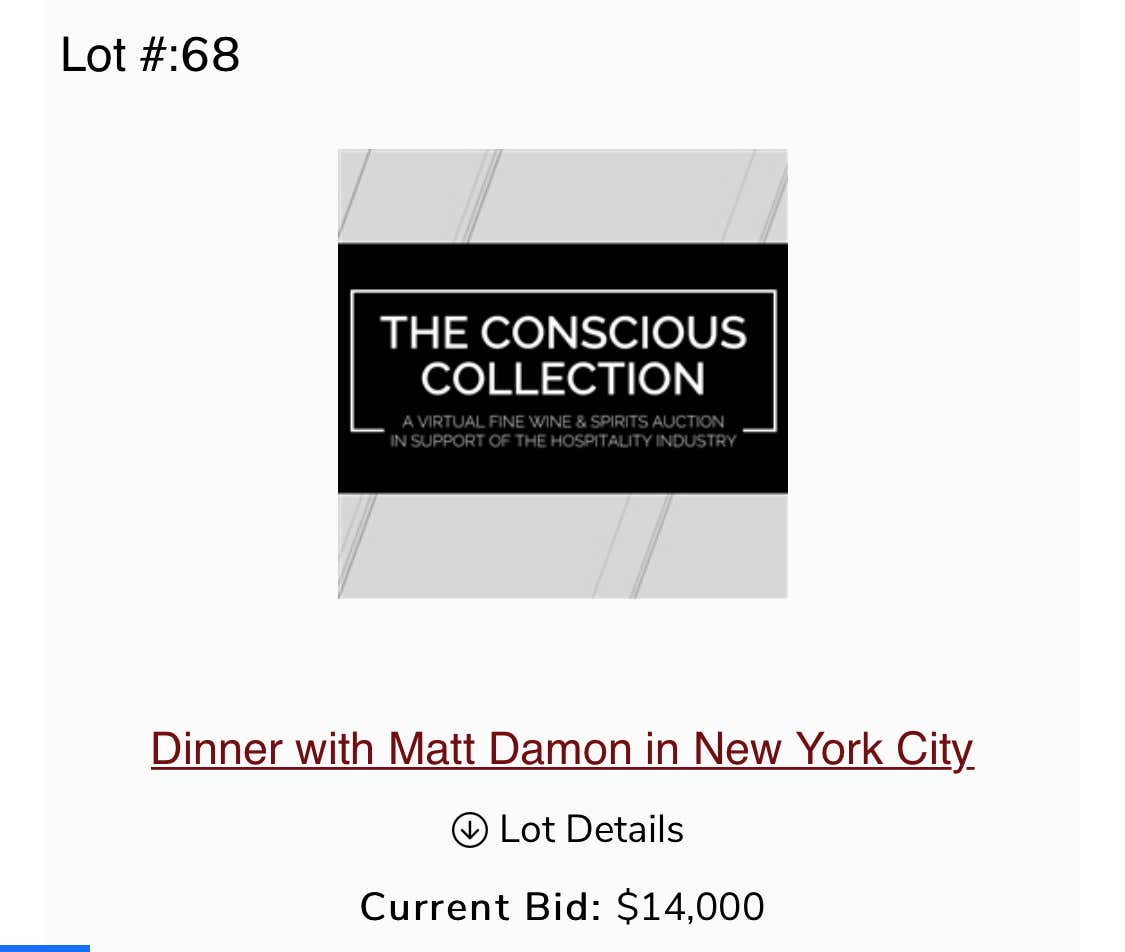 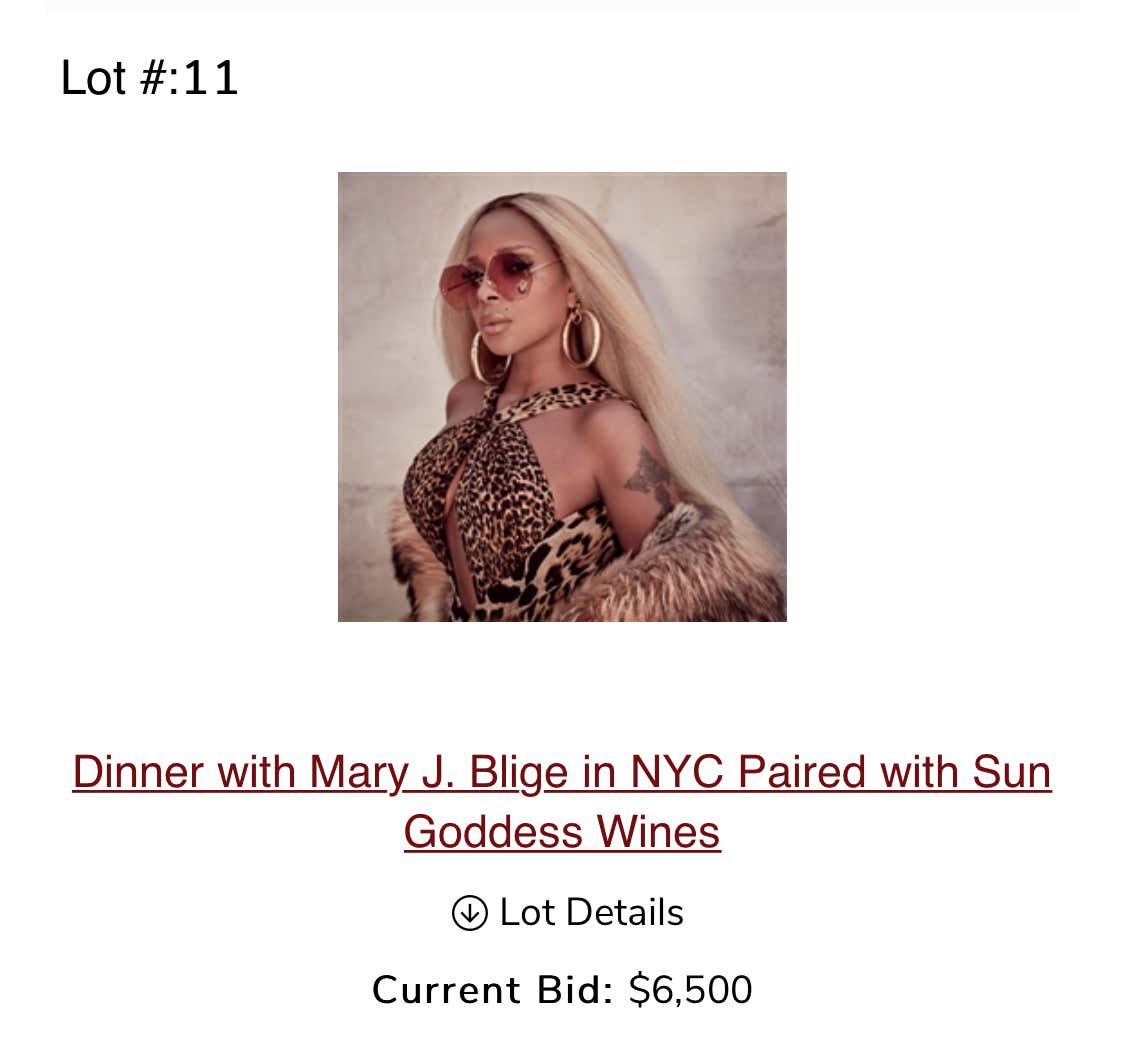 Murderers row of A-listers.  Am I now a bigger celebrity than George Clooney, Matt Damon and Mary J. Blige?  Not for me to say but the bids would suggest yes.  Both dinners are for you and nine guests in New York City.   The watch is personally worn by Clooney and comes with a signed picture of him wearing it. Not too shabby.

This is just some of what you can win.  If you’re a member of the finer things club, there’s plenty of wines and liquors available for you too.  Plus some wine tastings in Italian villas. And it’s all for a great cause. 6 PM ET tomorrow night here and on Zachys.