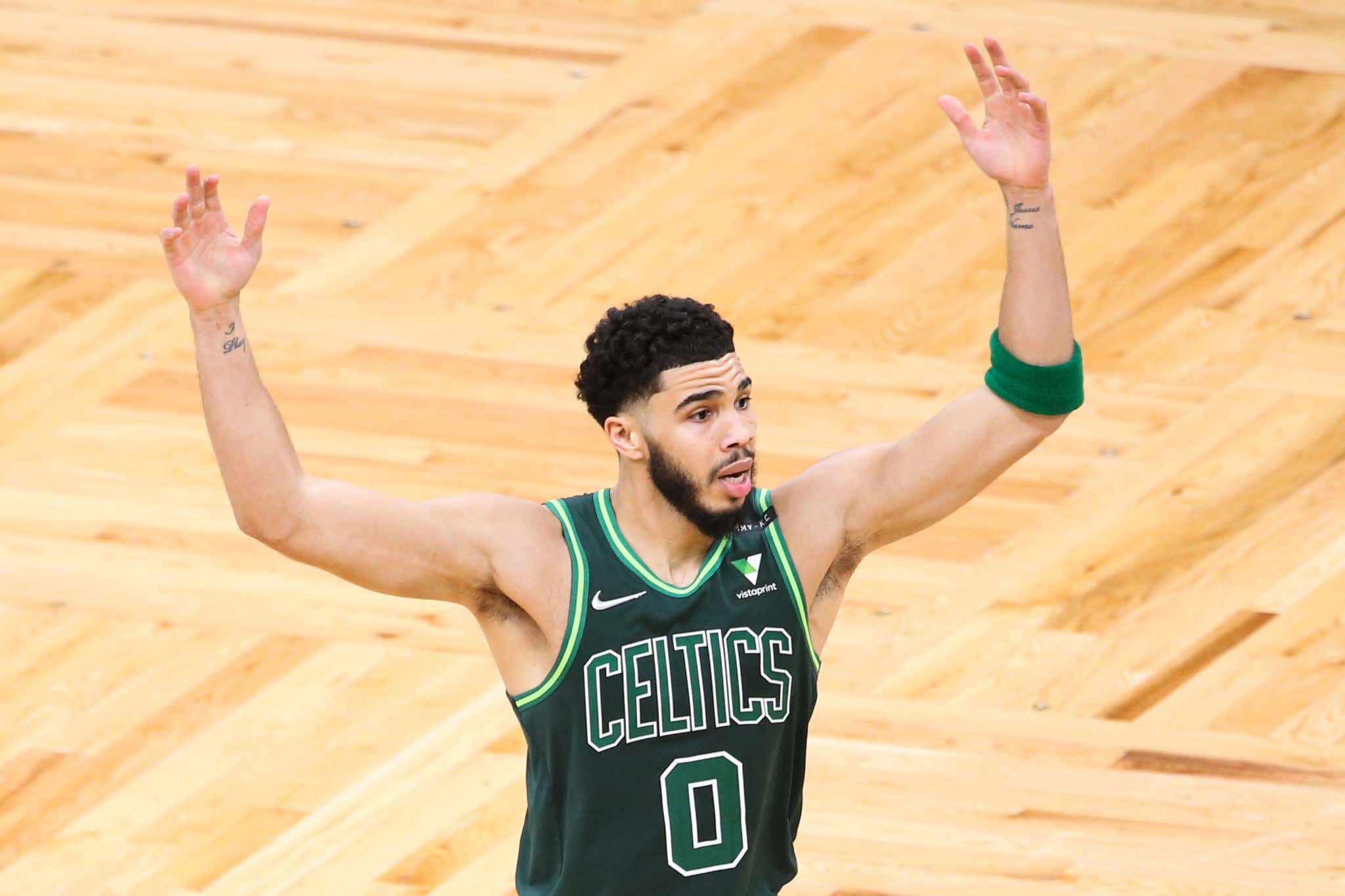 The Celtics entered last night's game against the Sixers with another opportunity to take a step forward. No singular game was going to change the fact that the Sixers are about 10 billion games ahead in the standings and live in a tier among the East elite teams that the Celts have not lived in since the opening week of the season. But what it was, was an opportunity to show that they are moving in the right direction. It's one thing to beat the Hornets and the Rockets. Those games against the Bucks were nice, but sort of feel like a distant memory.

Instead, they failed that test. Big time. Again. It's OK to admit that because frankly that's what happened. Now you'll wake up today and see all the usual hot take artists screaming and writing that the Celts should blow it up, fire their coach, fire their GM, blah blah blah. That comes with the territory when shit like last night happens. It's an easy way to generate clicks. For this Celtics team to compete with the best teams in the league, they need their best players to actually show up. They need Brad to find ways to help them be effective. This team is already operating with the thinnest margin of error you've ever seen, so when that doesn't happen you get results like last night.

We've also seen the opposite. We've seen this team hang with and beat the best of the best when they do those things. The issue this year is that is something that has not been able to be done consistently. I've said it time and time again, the difference between the Celts and the MIL/BKN/PHIs of the world is that the Celts basically have to overachieve and have a flawless night to beat those teams. That group can have an off night from one of their stars (in this case Tobias Harris last night), and it doesn't really matter. The same way one of Kyrie/KD/Harden can have an off night and the Nets are fine. When the Celts three best players all have bad nights in the same game, they don't stand a chance.

This was now the 3rd loss to the Sixers this season, and while all three consisted of important rotation players being out of the lineup, that doesn't excuse how they played last night. Would Evan Fournier and Tristan have helped? Of course, we'll get to that. But this is about the best players on this team stepping up and carrying this team in a much needed win. That hasn't really happened this year outside of a handful of times. That has nothing to do with who was in or out of the lineup. I would say 5 of your top 6 players all played last night and not one of them was any good. There's your issue.

So just like we always do, we do not run from the pain, we blog through it. So lets go.

- I legitimately don't even know what to put here? Maybe that Tacko somehow wasn't a complete disaster against Embiid? I'm only half joking. I think part of it was Embiid just deciding to not attack Tacko for whatever reason and settle, but he did guard Embiid for 10 possessions and held him to 2-5 shooting. That's honestly the only positive thing I can really take away from this game and that should pretty much tell you everything you need to know.

- Maybe the 16-18 from the FT line? That was good I guess. You see where I'm going with this? Let's just save ourselves the reading and move on shall we?

- In the NBA, you are only as good as your best players. Whether that's fair or not, that's the reality. So when I look at a game like last night and the inconsistency of this season, that's where I go first. So when I see Jaylen (-22), Tatum (-12), and Kemba (-13) all struggle in the same game it's hard for me to start anywhere else.

Here's the thing when it comes to the Jays. You have some people in the Boston media that are already running Tatum out of town. That's ridiculous and anyone with a brain knows it. But I do think there has been this defense mechanism where they've been excused for efforts like we saw last night with the thinking of "well look at the roster around them". I think that's a bit of a cop out to some degree. It's OK to say they both need to play better. They are the franchise players, with that comes a certain responsibility. You get the glory, and you get the heat. Each had their own issues in this game that really had an impact on the result

With Tatum, he actually wasn't that bad against Ben Simmons. He finished with 12 points on 4-8 shooting on 27 possessions. The issue wasn't that he had issues with his shot, it was that he had issues actually getting looks. That's what a DPOY will do to you. This is where I think Brad fucked up. We didn't see them run anything to help Tatum get cleaner looks. When that happens, we see Tatum have to turn to isolation offense, which is a death wish this season. To compound that, he was 3-9 against everyone else and was not the same aggressive player we have seen these last few games. A total of 10 of his 17 FGA were threes. Tatum also had 3 TOs. We also can't ignore that once again Tatum got off to a brutal start. In a game of this magnitude, he can't start 0-4 (0-3) with 0 points in the first quarter. That happens way too frequently and this team is too inconsistent offensively to always play that way.

With Jaylen, he once again got off to a great start, but then disappeared. He started 3-4 and entered the fourth quarter with just 6 FGA. Tobias Harris is a lot of things, but a lock down defender he is not. In that matchup, Jaylen only had 3 points on 1-4 shooting in 26 possessions. That's a matchup Jaylen has to win if this team wants to beat the Sixers. On the defensive end, it was the exact opposite. Harris bullied him on the block and got whatever he wanted. Add in Jaylen's 3 TOs as well that were all pretty much unforced errors, and it was a disaster night for him on both ends really.

- Then you have Kemba. A guy who was actually decent in the first two meetings (19/5 on 45/37%), but in this game could not win his matchup with Seth Curry. Just 5 points on 2-7 shooting on 24 possessions against Curry. That cannot happen. Curry is a shooter, not a lockdown defender. If Kemba can't win that matchup and Jaylen can't win his matchup against Harris, this team is toast. I would best describe Kemba's night as him basically being a nonfactor. Nobody really targeted him defensively so that was mostly a wash, but then offensively he made zero impact. He finished with 6 assists and 1 turnover, but you never felt his presence which is an issue because again, he was primarily guarded by Seth Curry.

- Where this game turned was obviously the second quarter, right after the Celts went up 35-31. Then came the giant 21-2 run from the Sixers. This isn't a case where Brad never called timeouts either, he called two. The issue was immediately following those timeouts the Celts came out and turned it over which then led to Sixers points. They couldn't even inbound the basketball for crying out loud.

This is where it really stings that Fournier wasn't available because it is that exact second quarter stretch he is on this roster for. Instead, we had to see guys like Semi/Grant get those minutes and they were a disaster. Fournier's offense/playmaking is the exact thing that is supposed to help prevent these dry spells. The Celts basically went 9 minutes without making a shot. That's insane.

But where you can't use the Fournier excuse is on the defensive end, and their best players making mental mistakes. During that huge Sixers run, there were a bunch and they came from Smart/Tatum/Jaylen. Miscommunication on switches, lazy closeouts, bad angles defensively, that has nothing to do with having Fournier on the court. Just look at this great thread by Jared Weiss who sheds some light on what I'm talking about

This is why I get annoyed when I hear the "well look at who the Jays are playing with!". Yeah, Tacko/Kornet being out there isn't great, but the four other players on the court during these issues are your best players. It's not like they were surrounded by end of bench guys that shouldn't be on the floor. Their best players need to be better. Period.

- Robert Williams got himself a big time education last night. Dating back to the bubble, it's clear that he's not ready to handle Embiid. This isn't exactly a slight, what human is? But the truth is Rob needs to be better when it comes to his fouls. It's one thing to foul Embiid when he overpowers you. But of Rob's 6 fouls, I'd say around 4 of them were contesting jumpers. You can't bite for a Korkmaz pump fake.

Of all the brutal performances, I'm least mad at Rob for his. He's learning and developing. Embiid is an MVP. I just need to see Rob be more disciplined moving forward if these teams ever match up again. Only one of his fouls was iffy (that Simmons up and down), and with no Thompson available it was even more important that Rob find a way to be on the floor. That didn't happen.

- While his shot selection was fine, it was the 6 TOs and pretty subpar defense from Smart that was the bigger issue. Having a 2:1 turnover to assist ratio from your best pure playmaker isn't going to cut it. On the defensive end, the Sixers shot a combined 7-11 when defended by Smart. That's just not good enough on any level.

- You've seen me mention turnovers a few times, because they finished with 20 (and 2 shot clock team turnovers), so let's call it 22. Well there's your ballgame right there. This isn't to discredit the Sixers defense, they are nails, but I would argue at least half of those were unforced errors. Dribbling it off your foot, straight up throwing it to the other team, two turnovers inbounding the ball. This team is not good enough to be that loose with the basketball. Of those 22, 16 came from your starting group. Four of the five had at least 3. You're not beating anyone playing like that.

- What I don't want to see is anyone complain about the FT disparity. First off, it's not new. This team hasn't shown an ability to keep Embiid off the FT line in all 3 meetings. It's also a result of the Celtics simply not attacking the basket. Of their 70 FGA, 34 were threes. They were not aggressive in the slightest. I could understand being upset if they did attack, got no calls, and the Sixers lived at the line. But that's not what happened. They settled, and as a result, relied on jumpers/threes which didn't fall. On the other end, the Sixers attacked, got the ball to a player who has a mismatch every single time and the FTs come with that.

This team now has another big time test tonight against the Knicks. The good news is pretty much everyone ahead of them for that 4/5 spot also lost last night so things aren't a complete disaster. The goal is still attainable, but not if the Celts play like we saw last night. This final stretch is about building better habits and playing the right way. That's still possible. But it's time to actually see it and not just talk about it.