"A teenage murder witness finds himself pursued by twin assassins in the Montana wilderness with a survival expert tasked with protecting him and a forest fire threatening to consume them all."

Now, you might be thinking "I don't really know who director/writer Taylor Sheridan is". Guess what, you probably do. Sheridan is THE neo-western king and has been for some time now. Just take a look at my scores for his Frontier Trilogy: 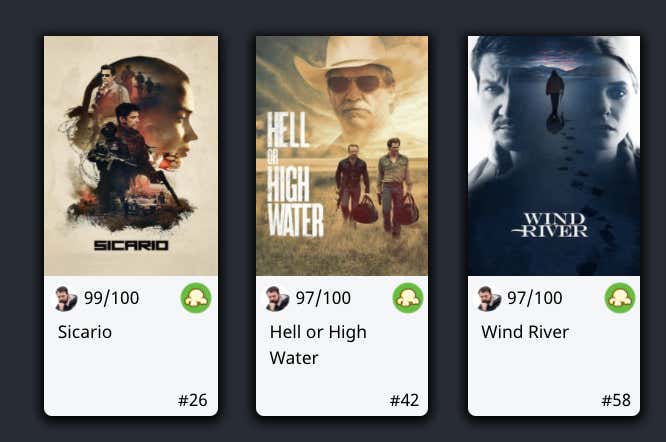 Odds are, you have probably seen at least one of these amazing movies. He is also the showrunner for Yellowstone, one of the best and most underrated shows in the game right now. The point is, if you are looking at this trailer with even the slightest hesitation, just remember who you are dealing with here.

The plot looks relatively straightforward at it's core with the added nugget of smokejumping, which was apparently Jolie's character's previous job. That element makes it look like we are going to get a slightly less over-the-top rambo-type fight between Jolie and these hitmen in the middle of a forrest fire. Hell yea.

It's worth noting that this is based off a very well received book of the same name and that the author of said book also co-wrote the screenplay. That should help the transition tremendously, you would imagine. Anyway, lets watch some clips: