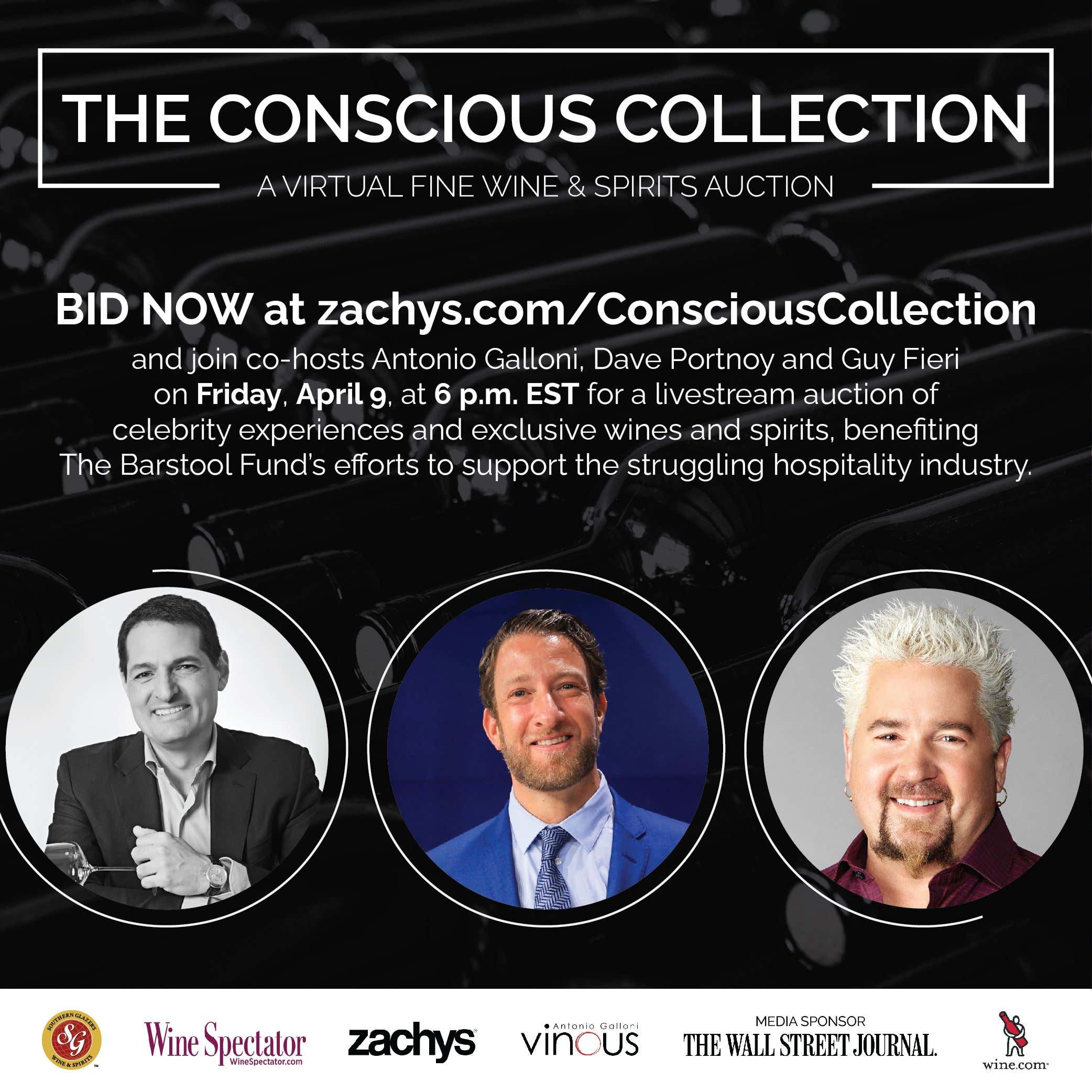 This Friday Guy Fieri and myself will be hosting a virtual auction to benefit The Barstool Fund.  We have over 100 lots available for bidding, featuring everything from a day touring Barstool HQ and watching a pizza review to a dinner with Matt Damon.  Guess which one has the higher bid right now?  It's being presented by Southern Glazer's Wine & Spirits and Wine Spectator Magazine and will be live streamed starting at 6 PM ET featuring the Mayor of Flavortown, myself, and fellow wine critic/finer things club member Antonio Galloni.   Zachys is where you can do the bidding and join the live auction on Friday. You can watch on here and on the Zachys website.

Guy Fieri approached me about doing this and it was a no brainer.  He is another guy that loves helping small businesses so this was an easy collaboration.  The Barstool Fund has already raised over $37 million and helped 332 struggling small businesses, but we need to keep momentum going.  Even as things get better and we return to some sense of normalcy, there's still a ton of business scratching and clawing just to stay afloat.  Seeing those tears on the other end of Facetimes never gets old, and every dollar you donate helps make those calls happen. Thanks to the Wine Spectator Scholarship Foundation who has already put up a $100,000 donation to get this going, and we're going to raise a whole lot more than that.

We will have a bunch of incredible lots available for bidding. Meeting me, dinners with celebrities, full blown vacations, rare wines, and a whole lot more. If you want to bid, make sure you sign up early.

Here are some of the lots you can bid on. Full list and details available on Zachys

The cream of the crop.  No big deal but this currently has the highest bid of all 105 lots. You'll get a tour of Barstool HQ and come with me for a pizza review.  Pretty surreal that we have people bidding $55,000 for this when there's also experiences up for grabs with bonafide A-list celebrities but as far as I know nobody else on the list is a Triple Crown winner who has survived 3 bee stings.

Also up for grabs is dinner with my good friend Jon Bon Jovi and his son Jesse.  You and 9 guests meet them at the Blue Parrot in East Hampton.  He's a huge Patriots fan which is an added bonus.

And no promises, but who knows if Cousin Greg might also randomly show up here too.

Am I now a bigger celebrity than Bon Jovi, Matt Damon and Mary J. Blige?  Not for me to say but the bids would suggest yes.  Both dinners are for you and nine guests in New York City.

I am not the only person in this auction who was listed as one of the 100 most handsome men of 2018. George Clooney has a lot available as well. You can get an Omega watch from his personal collection and a signed photo of him wearing it.   You know any watch worn by George Clooney himself is guaranteed high fashion.

This bid should be a lot higher.  You and a guest get a VIP visit to the set of Guy Fieri filming Diners, Drive-Ins & Dives.  Guaranteed an electric showing from Guy and I would assume some incredible food.

If you're looking for a bargain, how about a three night stay for 8 people in Tuscany with a bunch of wine tasting that is currently going for less than half the price of a Barstool HQ tour.

Those are just a few of the lots you can bid on. There's about 100 more available.  And most importantly, you're also helping out struggling small business in addition to helping yourself.  Again, the full list of lots is available HERE.

If you want to bid, make sure you sign up early.  The collection is open for bidding now and will culminate with a livestream auction this Friday at 6 PM ET.

And as always, go here if you want to donate directly to the Barstool Fund