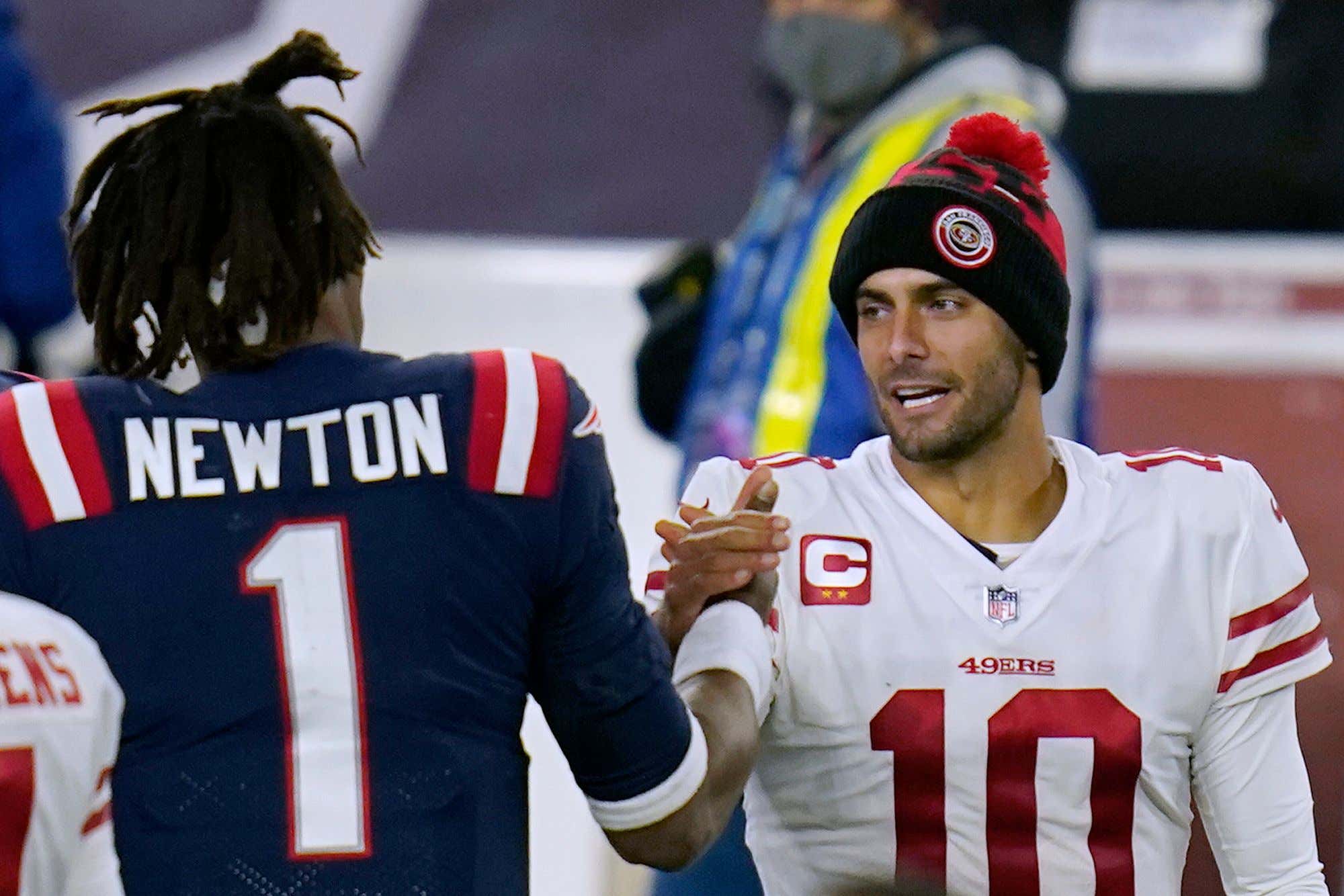 Now that the NFL free agency period is pretty much played out and the highest profile quarterbacks who were expected to hit the trade market, Russell Wilson and Deshaun Watson aren't going any place (Watson might be headed to a Personal Conduct Policy suspension, but nowhere else), the only show in NFL town is Jimmy Garoppolo. And now that the Panthers just spent some draft capital to get Sam Darnold, that's one fewer team in the market for him.

And so it is that the dance that's been going on all offseason between the Niners and Patriots for Jimmy G is developing into something much more elaborate and beautiful: A full blown mating ritual. John Lynch extends his tail feathers. Bill Belichick shows off his colorful plumage. Lynch presents his red backside. Belichick releases his fragrant pheromones. It's nature, in all its glory.

In the last few days, the Niners, who have said repeatedly they have zero in trading Garoppolo, preferring instead a scenario where they spent three 1sts and a 3rd to move up to get a quarterback, only to have him sit on the bench for a year while they pay $25 million to Garoppolo to be a lame duck everyone knows is on his way out, named their price:

Albert Breer in SI - From Anthony (@a2low11): What is the compensation the Niners are looking for in a Jimmy G trade? A first?

Anthony, I was told that, yes, it’d take a first-round pick for the Niners to listen at this point. … As it stands right now? I don’t think the Niners feel any sort of urgency to move Garoppolo, which makes his market value completely irrelevant in comparison to the Niners’ price.

And so the haggling begins. Like homeowners who've already signed a Purchase & Sale on a new house, San Fran wants the world to think they're not highly motivated sellers. That they love it where they are so much that they'll be more than happy to carry two mortgages. Which flies in the face of the fact that they put so much down on the new place and have already pulled their kids out of school. But fine. That's the way it's done. They put it out there that they have no intention of moving. Buuuttt … If someone comes along and is willing to blow them away with an offer - if they can flip the place for much more than they paid for it three years ago - they're willing to listen.

Which puts the Patriots in the position of acting like they're happy where they are, too:

Mike Reiss, ESPN - Coach Bill Belichick is sometimes fond of saying "Last time I checked, our first game isn't until September." That basically explains why the Patriots are pressing the QB "pause" button at the moment, with owner Robert Kraft expressing support for Cam Newton and Jarrett Stidham in 2021, while also acknowledging the team has to solidify the position long-term. …

[A checkpoint to watch for is] End of organized team activities/start of training camp (mid June/late July): At this point, the San Francisco 49ers would have a better grasp of their comfort level with their No. 3 overall pick, and if it might be realistic to turn the team over to him. If so, that could lessen their asking price for Garoppolo. In turn, the Patriots will also have more information on Newton and Stidham from OTAs to gauge if their offseason analysis that both could be the answer in 2021 has merit. That intelligence would dictate how far the Patriots might be willing to extend in a potential trade offer.

Right. The Pats love their situation and aren't looking for a change. They're just checking out the place because they enjoy a good Open House and their Saturday was free. Buuuttt … They'll be happy to take a flyer and a business card and put their name and number down on the contact sheet in case the asking price comes down closer to their price point.

I don't hate it. I just continue to say what I've been saying since before the end of the 2020 season. That Jimmy G-to-NE makes too much sense for all involved. I said that back when it was predicated on San Francisco trading for a veteran or hoping to luck out with at the 12th pick. When they moved up to No. 3, it all but guarantees Garappolo has taken his last snap for them.

The scenario they're floating that they're prepared to keep him and bench the rookie is preposterous. The request for a No. 1 for him when they're dealing from a position of weakness is ridiculous. The notion the Patriots are putting out that they much see enough in Newton and Stidham in 7-on-7 drills during OTAs to keep the status quo is absurd. All of this is just mating ritual. And like all such courtship displays, the biological need is just too strong. And they are going to end up making sweet, sweet love that will make everyone feel good once all the dancing is done. In the meantime, all we can do is sit back, watch, and wait for the damned thing to be consummated already.