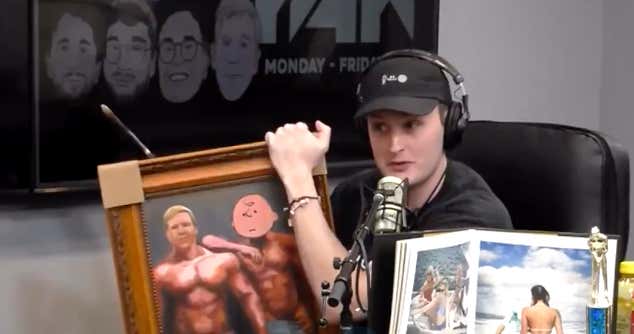 Today was show-and-tell day on the Yak, an annual tradition that always brings maximum giggles. I, for example, brought in an elephant tusk that was also a magnifying glass. Probably the coolest thing I had in my house, completely superfluous but cool nonetheless.

But here’s the rub: KB No Swag wasn’t on the Yak today. Why would that matter? Well it’s not the first time that Brandon Walker has pulled the nasty stunt of bringing in a painting for show-and-tell. And last time, KB No Swag punched through Brandon’s painting like it was a wooden plan in a white belt karate class. And so a tradition was borne; Brandon brings in a painting, KB destroys it.

But like I said, KB out. So here I was, elephant tusk in one hand, sultry oil-on-canvas in the other hand. Brandon pleaded with me to spare his artwork. KB’s spirit urged me to stab though the portraits’ poor traits with the tusk of the magnifying glass like a matador slaying a bull.

On this day I chose mercy. Next time I might not be so generous.