Source - You've seen birdies and eagles on a golf course before, but ever seen an eagle EAT a birdie on the links?!!?!That's exactly what happened during some guy's round in Canada on Thursday ... when a bald eagle straight up hunted down a seagull and then ate it right next to a fairway.

The wild scene all went down out at Point Grey Golf & Country Club in Vancouver ... where a golfer decided to whip out his camera as an eagle was flying by.

What happened next was INSANE ... the eagle stalked a seagull -- tailing it at full speed, before it finally latched on to the bird with its razor-sharp talons.

Mother nature...isn't she beautiful? One second you're golfing with your buddies, the next you're laying witness to a brutal bird-on-bird murder. You knew the seagull stood no chance the second it turned onto the fairway and the eagle started gaining ground too. Gulls can't compete with the speed of birds of prey. Also, shout out to the two little birds for trying to break things up before they got too ugly. It didn't work, but at least they tried. You can see them at the top right of the screen below... 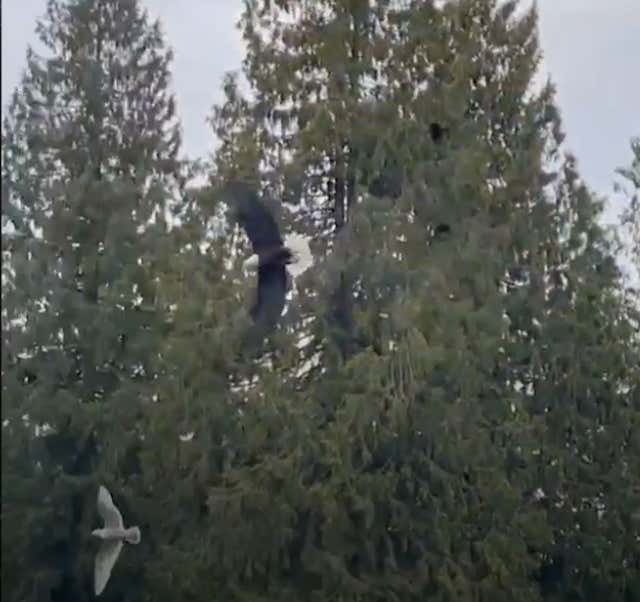 The chase must've been going on for a while because everyone in the frame had  enough time to take out their phones a film.  Regardless, I've been in an animal fight YouTube hole lately and the stuff you can find is wild. Type in any species-on-species fight and it exists; Bear vs Tiger, Wolf vs coyote, Cat vs literally any animal on earth- it's great. Anyway here's a nine minute compilation of eagles demolishing other animals. Don't watch it if you're squeamish. Enjoy…