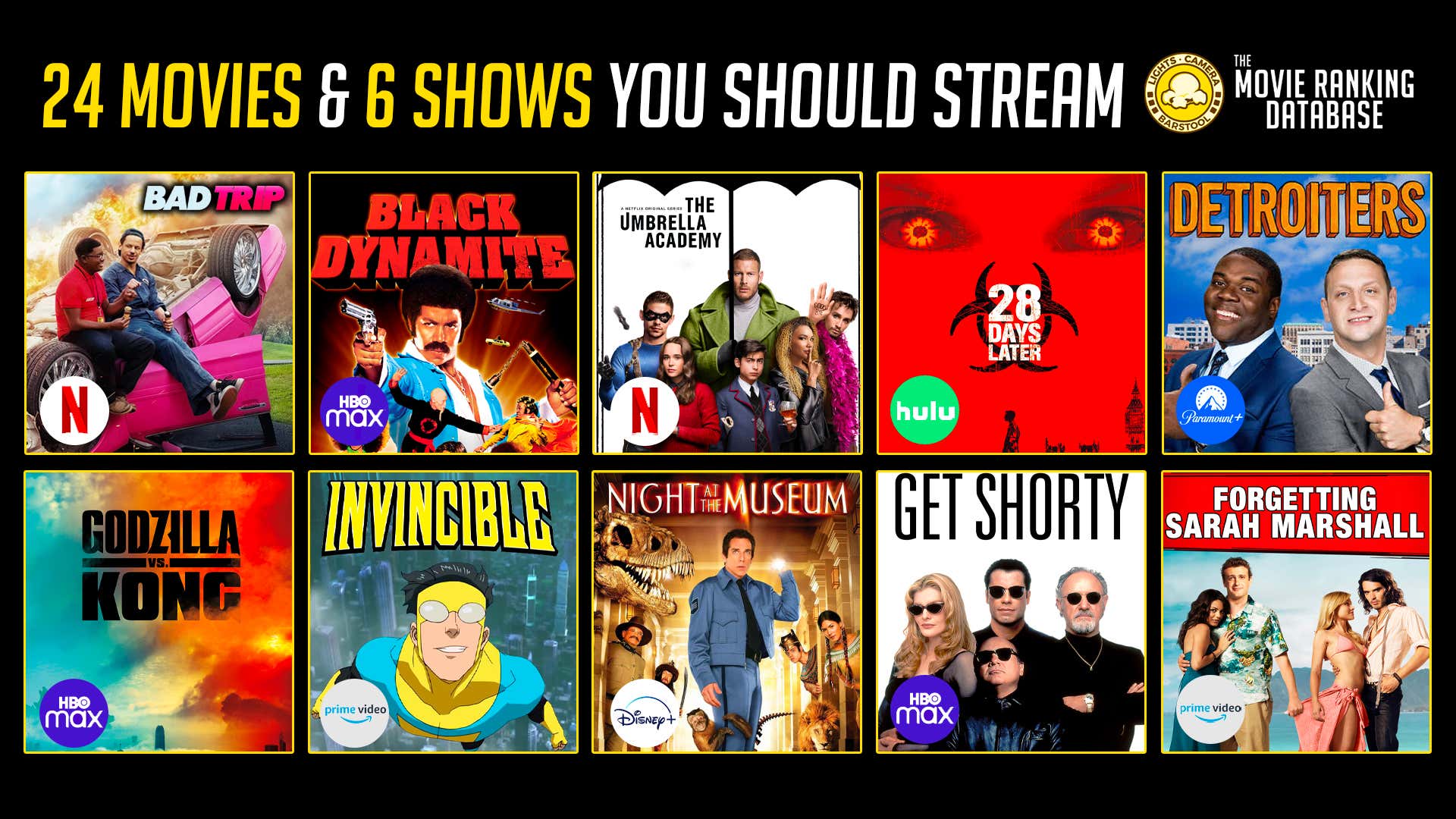 1. Saving Private Ryan - Following the Normandy Landings, a group of U.S. soldiers go behind enemy lines to retrieve a paratrooper whose brothers have been killed in action. - It is one of the greatest war movies ever made and features incredible performances from top to bottom. Spielberg put on a CLINIC and gave us a hard-to-watch, but incredibly rewarding movie. FUCK UPHAM!

2. Bad Trip - Hidden cameras capture two best friends pulling hilarious and inventive pranks on an unsuspecting public. - We recently did a review of this on LCB and I'm still shocked at how much I liked it. Blew away all my expectations and is easially one of the best hidden camera movies or shows I have seen in the past decade+

3. Concrete Cowboy - Sent to live with his estranged father for the summer, a rebellious teen finds kinship in a tight-knit Philadelphia community of Black cowboys. - I just finished watching this, and it follows the trend of recent great movies of including real life subjects as actors. In this case, they used some real-life Fletcher Street cowboys in supporting roles. The bones of this movie are a little corny, but I love the stuff happening away from that.

4. Croupier - An aspiring writer is hired as a croupier at a casino, where he realizes that his life as a croupier would make a great novel. - A little bit thriller, a little bit noir, and a lot of bit sexy british man Clive Owen. It's a very solid casino movie with a good payoff.

5. The Umbrella Academy (SERIES) - It revolves around a dysfunctional family of adopted sibling superheroes who reunite to solve the mystery of their father's death and the threat of an impending apocalypse. - This series (based on the comic book series by MCR frontman Gerard Way) has been such a unique and fun ride. Both seasons have been incredibly fun and interesting in their own way.

1. Godzilla vs Kong - The epic next chapter in the cinematic Monsterverse pits two of the greatest icons in motion picture history against one another - the fearsome Godzilla and the mighty Kong - with humanity caught in the balance. - Monke vs Lizard

2. Black Dynamite - Black Dynamite is the greatest African-American action star of the 1970s. When his only brother is killed by The Man, it's up to him to find justice. - This is a very funny movie that I've reccomended plenty of times before. This scene has been, and continues to be, my pitch.

3. Whisper of the Heart - A love story between a girl who loves reading books, and a boy who has previously checked out all of the library books she chooses. - A great studio G movie that is a slow, but beautiful burn.

4. Walk Hard: The Dewey Cox Story - Singer Dewey Cox overcomes adversity to become a musical legend. - This is one of the more underrated comedies from this era. YOU DON'T WANT ANY PART OF THIS SHIT!

5. Red Dawn - It is the dawn of World War III. In mid-western America, a group of teenagers band together to defend their town, and their country, from invading Soviet forces. - I could gush about this movie forever. One of the premier and best made propaganda works we have ever had and I don't give two fucks about that when I watch. Remember the dogshit Josh Peck remake? Yea, well don't.

6. The Goonies - A group of young misfits called The Goonies discover an ancient map and set out on an adventure to find a legendary pirate's long-lost treasure. - An always re-watchable adventure that will always be relevant across generations. Poor Sloth, man. The guy is STILL a punchline for people calling other people ugly. Didn't you watch the movie?!!? Appearances are deceiving!

7. David Bowie: The Last 5 Years - A detailed look at Bowie's last albums, The Next Day' andBlackstar', and his play `Lazarus'. In his final five years, Bowie not only began producing music again, but returned to the core and defining themes of his career. - AS a more casual Bowie fan that didn't know much about the lead up to his passing, this was a very interesting documentary. Also very sad, so warning.

8. Get Shorty - A mobster travels to Hollywood to collect a debt, and discovers that the movie business is much the same as his current job. - I love this cast, the premise and the very witty execution of the movie. If you like gangster movies and sharp comedies, you'll love this movie.

9. Made for Love (New Series) - A young woman, on the run after 10 years in a suffocating marriage to a tech billionaire, suddenly realizes that her husband has implanted a revolutionary monitoring device in her brain that allows him to track her every move. - I got a few episodes of this show ahead of time and I really like it. Cristin Milioti is skyrocketing up my charts of funniest actresses in the game right now.

10. Warrior (Series) - Set during the Tong Wars in late 1870s San Francisco, the series follows Ah Sahm, a martial arts prodigy who emigrates from China in search of his sister, only to be sold to one of the most powerful tongs in Chinatown.- I know I keep recommending this show, and it is for good reason. Incredible fights, great acting and phenomenal production work.

1. 28 Days Later - Four weeks after a mysterious, incurable virus spreads throughout the UK, a handful of survivors try to find sanctuary. - I reccomended the sequel to this movie last time with the disclaimer "It is nowhere near. as good as the original". Well, this is the original! One of the best horror movies and "zombie" movies of the past 10 years.

2. That Think You Do - A local Pennsylvania band scores a one hit wonder in 1964 and rides the star-making machinery as long as they can, with lots of help from its manager. - This movie gets lost in. the Hanks shuffle which is bullshit.This is a delightful watch that never fails to put me in a good mood.

3. Little Monsters - A washed-up musician teams up with a teacher and a kids show personality to protect young children from a sudden outbreak of zombies. - I don't think we had. much of a chance to yak about this. on LCB, but this movie is a treat. An off the beaten path black comedy with a solid play on the zombie genre.

4. Another Round - Four high school teachers consume alcohol on a daily basis to see how it affects their social and professional lives. - My #3 movie of 2020. That's a high ass ranking! It's Danish-subtitled, so if that is an impossible barrier for you when watching movies, I guess you can skip it.

5. Fargo (SERIES) - The series is set in the same fictional universe as the film, in which events took place in 1987 between Minneapolis and Brainerd, Minnesota. - This season-serial is very, VERY good. Every season is it's own separate story, and some are better than others. The first season is an undeniable banger, though.

1. Forgetting Sarah Marshall (Prime Video) - Devastated Peter takes a Hawaiian vacation in order to deal with the recent break-up with his TV star girlfriend, Sarah. Little does he know, Sarah's traveling to the same resort as her ex - and she's bringing along her new boyfriend. - An incredible, evergreen RomCom that. is among the best of the last 20 years.

2. Night at the Museum (Disney+) - A newly recruited night security guard at the Museum of Natural History discovers that an ancient curse causes the animals and exhibits on display to come to life and wreak havoc. - If you have kids, this is always a great choice for family movie night.

3. The Gift (Prime Video) - A married couple, Simon and Robyn, run into Gordo, an old acquaintance. Things take a turn when Gordo begins to drop in unannounced at their house and inundates them with mysterious gifts. - If you like suspense and thrillers, this is the one. Check it out.

5. Invincible (Prime Video SERIES) - Mark Grayson is a normal teenager, except for the fact that his father, Nolan, is the most powerful superhero on the planet. Shortly after his seventeenth birthday, Mark begins to develop powers of his own and enters into his father's tutelage. - This has now become part of my friday routine with Falcon and the Winter Soldier. It's fun, subversive and has an A+ voice cast. It's successfully filled a 'The Boys' sized hole in my heart.

1. Mission: Impossible 3 - IMF agent Ethan Hunt comes into conflict with a dangerous and sadistic arms dealer who threatens his life and his fiancée in response. - This is definitly in the bottom half of MI movies, but god damn do I love Philip Seymour Hoffman's villain in this movie.

2. Trainspotting - Renton, deeply immersed in the Edinburgh drug scene, tries to clean up and get out, despite the allure of the drugs and influence of friends. - This is such a hard movie to describe in the best way. But it's Ewen McGreggor taking us deep into the drug-addled mind of his character's mind.

3. The Soloist - A newspaper journalist discovers a homeless musical genius and tries to improve his situation. - I remember watching this movie in high school and thinking it was the shit. Then watching it later and thinking a little bit less of it. I still love Foxx and Downey Jr.'s chemistry which has stood the test of time as a friendship.

4. Patrice O'Neal: Elephant in the Room (Stand Up) - RIP to a comedy legend. This special fucking kills me every time I watch it.

5. Detroiters (Series) - Best friends and next-door neighbors Sam Duvet and Tim Cramblin work together as creatives at Tim's family's advertising agency in Detroit (which Tim took over after his father stepped down), producing low-budget TV commercials for local businesses. - Whether you are a fan of Tim Robinson from his netflix show (which Sam Richardson was also in), or Richardson from VEEP, I think you can vibe with this show. It's simple, easy comedy.