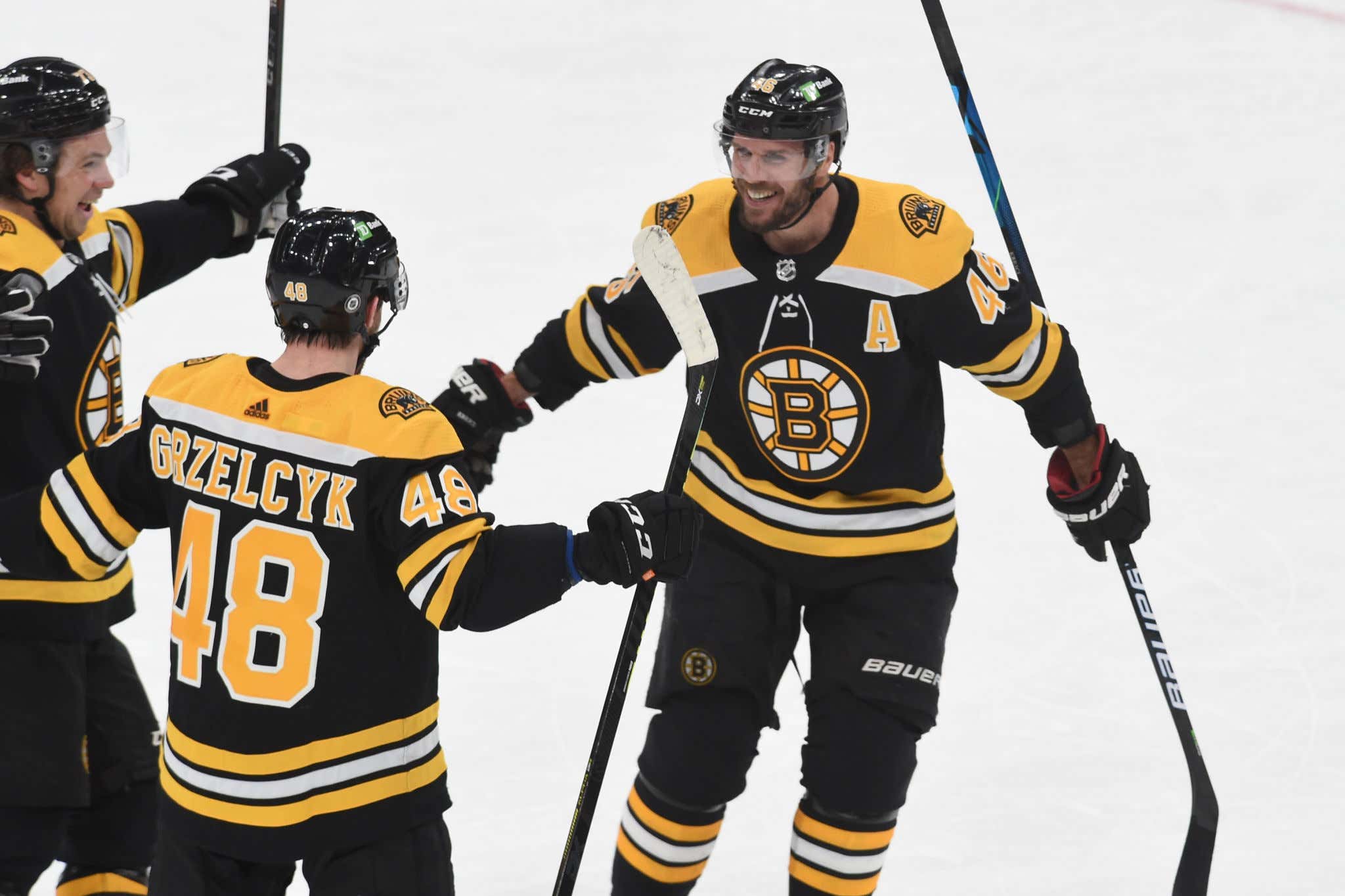 Holy shit did they need that. Down 4-2, the Bruins' rallied with two big goals from Charlie McAvoy and Matt Grzelcyk in the 3rd, then Charlie Coyle and David Pastrnak sent fans home happy with goals in the shootout for the win. The B's get a massive two points against the Devils who have been a god damn thorn in their side all year long (4-2 season series).

Nick Ritchie would answer right back for the Bruins, Blackwood couldn't handle his shot. His 10th of the year. 1-1.

Michael McLeod blew by Matt Grlzecyk and dangled Jaro Halak to regain the lead for the Devils. Defense optional in this 1st period for the Bruins apparently. 2-1 NJD.

The Bruins once again failed to clear the puck out and Travis Zajac redirected a shot to extend the Devils lead to 3-1. Clifton couldn't handle him.

Late in the 2nd Marchand (who just body slammed Jesper Bratt) exited the box and fired one past Blackwood to give the Bruins life.

Charlie McAvoy gave the Bruins life once again by snapping Craig Smith's long rebound past Blackwood to make it 4-3 Devils with just over 9 minutes to go.

Late in the 3rd Matt Grzelcyk's shot right off the face off tied the game for the Bruins. 4-4.

B's had some chance but no goals were scored in the shootout. Killed a slashing penalty. It was on to the shoot out.

David Pastrnak won it for the Bruins in the SO. But this Coyle goal was a thing of beauty.

- Brad Marchand (false positive for COVID 19) and Brandon Carlo returned to the lineup tonight. Marchand had a goal in his return and a fight body slam. He was all over the ice trying to get the B's back in it. 2 point night for him. Carlo played 22:14 (3rd most on D), had some rust but man was it good to see him back out there after a 10 game absence. Was out there for some big kills on the PK.

- 10 goals on the year for Nick Ritchie. Tying Patrice Bergeron for 3rd on the team. 2021 the year of Big Ritch.

- Three assists each for Krejci and Smith. That line is really starting to get going. Krejci now has 8 assists in his last 5 GP. Smith set up Grzelcyk for the game-tying goal in the 3rd. Good shit.

The defense was… how can I put this lightly… absolute dog shit tonight..

- Two horrendous turnovers from Jeremy Lauzon tonight. Lauzon was pressured by the Devils forecheck and coughed it up which led to Miles Wood's goal in the 1st. Side note why does Miles Wood turn into Wayne Gretzky when he plays the Bruins? Him and Palmieri both.

- Lauzon then coughed up a face off in the defensive zone straight to Kyle Palmieri (who the Bruins should trade for) to make it 4-2 Devils late in the 2nd right after Marchand's goal. Brutal. Just brutal tonight. He's gonna have to work through it. It's part of the reason why they didn't re-sign Chara, they want to see how these guys respond.

- B's once again couldn't get the puck out leading to Travis Zajac's goal, Clifton wasn't able to take his stick away. Just a frustrating night for them in Carlo's return. If anything I thought the defense was going to be sound tonight… it as anything but. Hopefully they clean it up before the Penguins come to town.

- That being said, Charlie McAvoy did pull the Bruins within one midway through the 3rd, and Matt Grzelcyk scored to tie. Two huge goals. We'd be having an entirely different conversation tonight without those two scoring.

- One of the few players who looked decent tonight was Anders Bjork. I liked how he's played the last few games. Jumping on pucks, using his speed. He's looked great but still looking for that production. Coyle was firing all night as well, big SO goal for him, same with Smith. Offense looked way better.

- Tonight was Hockey Fights Cancer night at the TD Garden. I lost both of my grandfathers to the same type cancer (esophageal) a few years ago and saw how horrible it can be. Would never wish that on anyone. Hope anyone tonight that is either dealing with cancer, or know someone who is fighting, just know you are always in my thoughts and hopefully tonight's comeback win served as a small piece of happiness during a tough time.

B's are back at it on Thursday night when the Pittsburgh Penguins come to town. Bring it on.

It was a great night to win a hockey game. CUE THE MUSIC.