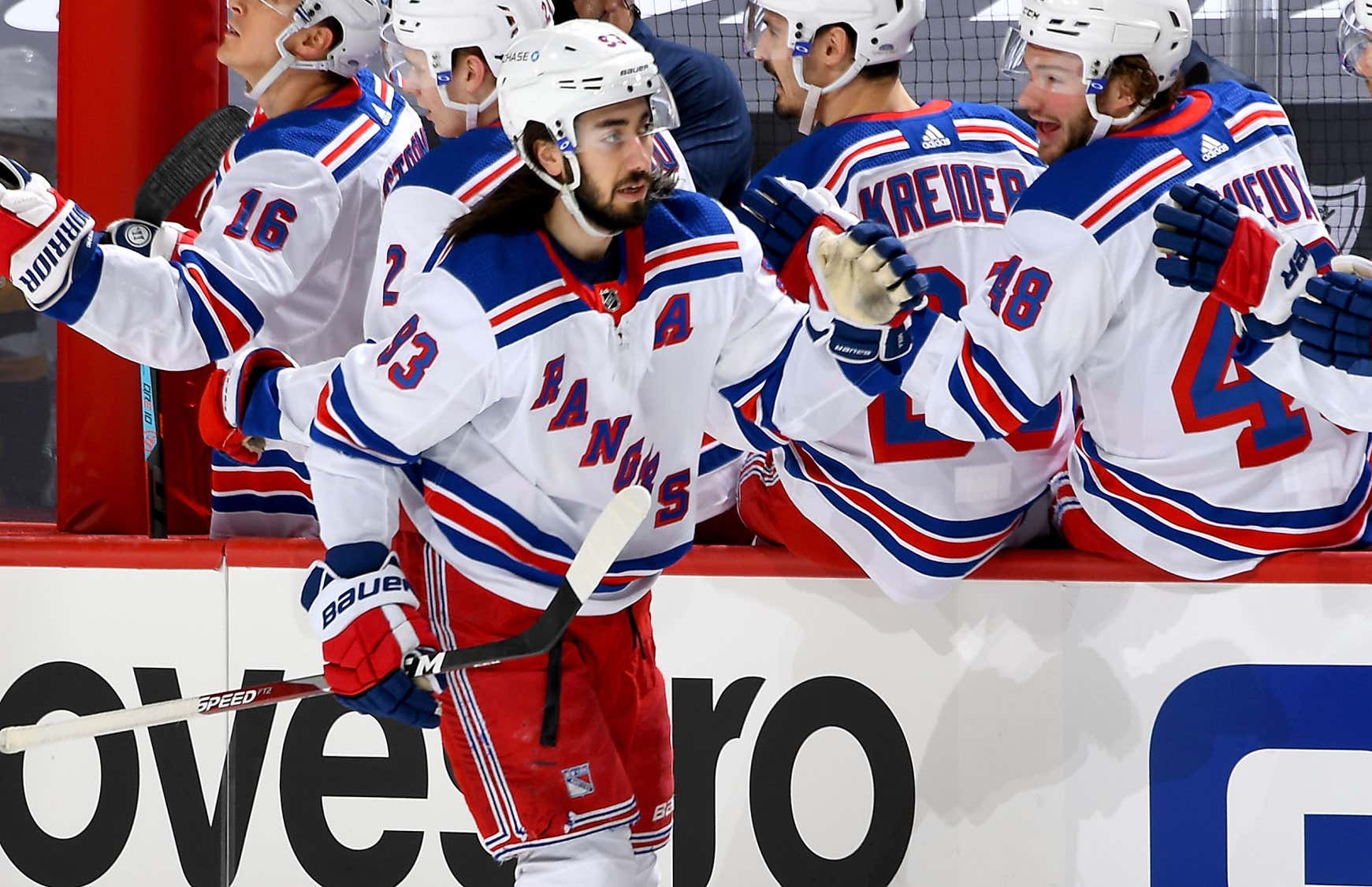 7 goals, 8 assists for 15 points…in five games? Including a pair of natty hatty/6-point outings against the same damn team? After a mere 3-8-11 in his first 27?

Fuck waiting for Easter. Mika Zibanejad has officially risen to save the New York Rangers.

After a horrendous 1-4-1 start, despite names like Panarin, Shesterkin, Trouba, Kakko, Chytil all missing at least a quarter of the season, the Blueshirts found a way to hover around .500 until they could finally get healthy. Now they've got all hands on deck in the midst of a 5-1-1 run with DJ ZBad running as hot as a player possibly can. This shouldn't be news to hockey fans though. Let's not forget, from November 30th through the Covid-shortened end of last season, Zibanejad was the best scorer in the sport. His 36 tallies over that 46-game span led Matthews & Ovi by 5 while 63 points were a tick ahead of a pair of Hart finalists in Draisaitl & Panarin. There was nobody better then, and there's nobody better right now.

It was around mid-February when the Rangers got smoked by a Devils team fresh off a 7-game postponement & had fans ready to throw in the towel. Putting forth one of their worst efforts of the year after having dropped their previous 3 was a pretty solid reason. Since then though, they've been a top-10 squad at 11-6-1. Why? Because what's been a consistently solid defensive team has finally gotten offensive help in a major way - no one's scored more per game during that stretch. It's no coincidence that happens to be exactly when #93 started giving glimpses of what put him among the elite a season ago. Panarin is the best pure talent. Fox is a fucking wizard and, health permitting, Shesterkin is about as close to prime Lundqvist as we could've ever asked for.

But when Zibanejad goes, so do the Rangers.

Is it too late though to salvage a playoff run? Nah. It won't be easy but it's certainly possible. Let's forget about Boston for now as they've got 3 games in hand. Set sights on the Penguins who, although they reeled of a pair of W's against the lowly Sabres, skated their last tilt without 5 of their top 9 forwards. They've got a tough run coming up against the Isles, Bruins & a pair at MSG that the Rangers simply have to win. So the NYR gotta take those two along with the two they've got in hand. That cuts a 10-point standings deficit down to 2. From there, it's a coin flip over the season's remaining 20 games.

Meanwhile the Rangers get to see their best buds from Philly one more time, then two against the Caps & two in Buffalo before those must-win matchups with Pittsburgh. These next couple weeks are crucial as to whether or not their last month of hockey will matter - and even if they're successful there's still a lot of work to do to creep into that 4th slot. With the full-strength Rangers firing on all cylinders behind a flat-out dominant Mika Zibanejad though, don't be surprised to see the Garden hosting playoff games for the first time since 2017.