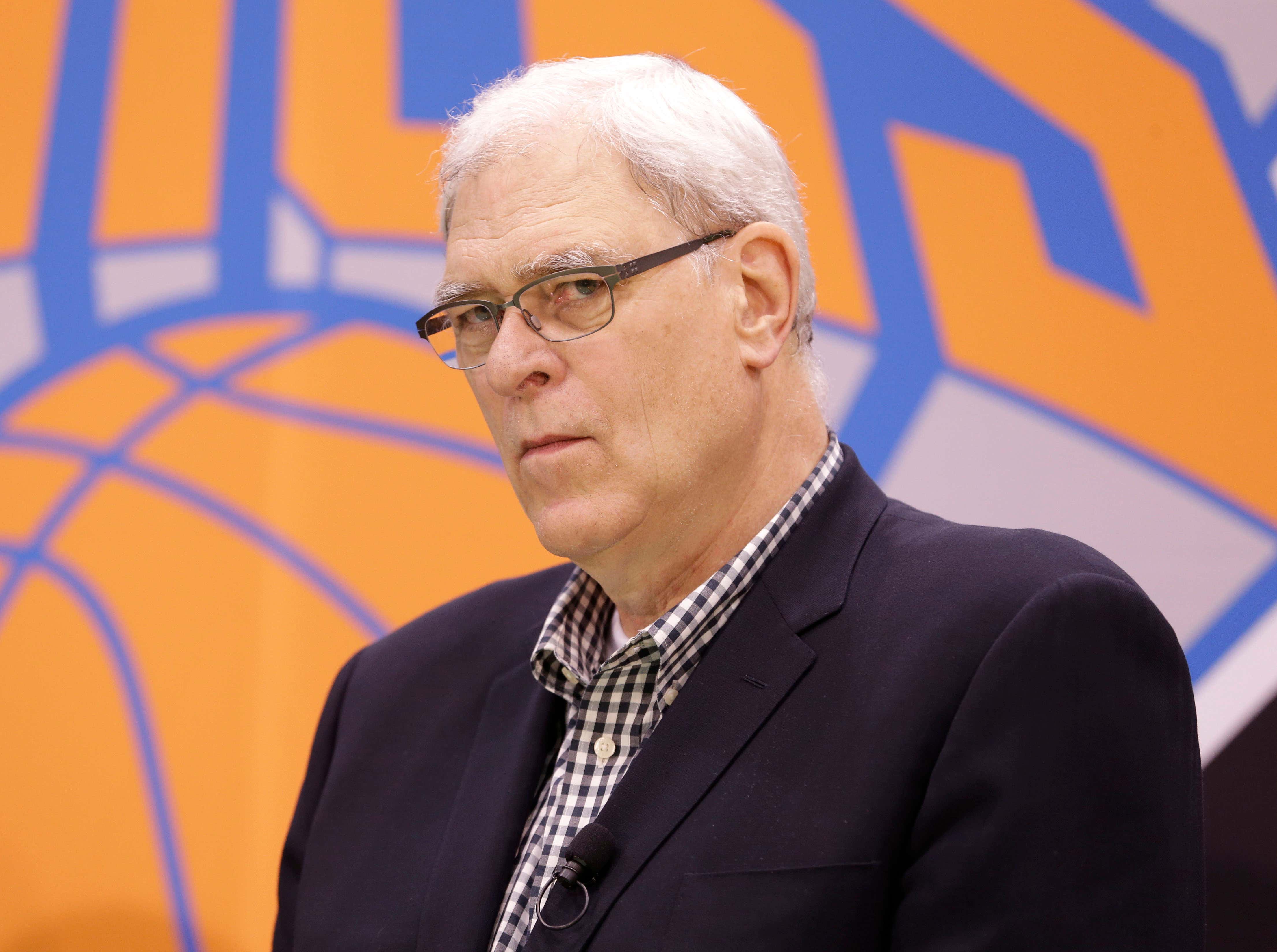 Yesterday's wonderfully quiet trade deadline and comeback win was clearly too good for Knicks fans in the eyes of the Basketball Gods, so the universe had to balance out by giving us the architect of some of the worst teams in Knicks history being splattered on the back pages of the papers this morning after he appeared on Coby Karl's podcast.

Now I personally chose not to listen to the pod since that clip made me want to fall asleep like a lot of Phil's ramblings from shit that happened before the invention of color TV and living through that shit was bad enough. The Post transcribed Part 1 of the pod and shockingly it appears that the blame falls on people not named Phil Jackson!

The first unit in the crosshairs was the New York media:

“[The media] was decidedly against the organization, and they were looking for whatever they can do to throw aspersions,” said Jackson, who also compared his press treatment to the type President Donald Trump received during his time in office. “I kind of understand Trump had to live with probably for his first 3½ years in office with the media.”

Look, the New York media is what it is and anybody not ready to try to work together with the media will get killed by it. As someone that has lived in New York for pretty much my entire life, I can confirm that business is good when the local teams are good but business is booming when the local teams are terrible. Those headline writing Picassos truly shine when there is a historically bad team rife with scandals and shit, which in turn leads to newspapers being slung and links being clicked. That's Day 1 New York Media stuff. Phil acting like he was shocked this was the case is hilarious at best and terrifying at worst for someone that has been around basketball for decades.

“It felt like a major disappointment to have to go through that and not being able to turn that thing around because it’s a heartbeat of New York,” he said. “It’s a big part of what they like — their basketball team. There are long-devoted Knick fans and I appreciate their desire, but I think they get in the way of the team a lot of times.”

I'll let two of the more popular Knicks fans take this one.

Yeahhhhhh I'm not going to apologize for Knicks fans being upset that their team has been an outright embarrassment for pretty much this entire century and wondering where the progress was after this stretch.

All things considered, Knicks fans are a pretty patient bunch because if they weren't, the would have stopped following the team if not the entire sport of basketball years ago. All we ask is that you have a plan and we will support it as long as you stay consistent or show even the slightest glimmer of success. Don't believe me? Here's Exhibit A your Honor:

The fans being fed up may have had something to do with the constant losing as well as the first coach you hired having the worst season in franchise history after reportedly getting his ass kicked by Matt Barnes for sleeping with his ex-wife.

“Derek Fisher, I thought, was one of my top leaders of the Lakers team and a guy who understood the relationship of players to a game and offensively how the [triangle] system plays,” Jackson said. “He was himself caught up in a personal situation. It was a distraction. And at best, undermined his authority with the team.”

I'm not even gonna lie, I will always have a special place in my heart for Derek Fisher since his hiring coincided with me becoming the Knicks blogger which led to a whole bunch of content gold as well as Portnoy actually saying I blogged the initial Barnes story perfectly, which is pretty much the nicest thing I've ever heard him say about a Barstool employee, and I'm convinced I wouldn't be blogging smut for a living if it wasn't for the Slippery Fish.

Nonetheless, you cannot blame the media for covering a scandalous story like that or the fans for losing their shit because of it. I can't even get mad at Phil for turning to an ex-point guard he used to coach as his first hire since one of the great What Ifs in Knicks history would have happened if Steve Kerr joined the Knicks instead of the Warriors. But goddamn that hire was a fucking disaster from the jump.

Speaking of disasters, Phil weighed in on the Carmelo Anthony fiasco as well!

“Carmelo, I think, wanted to be a leader, but I don’t think he completely knew how to be a leader as a player,” Jackson said. “And I think that the strength of his personality was intimidating to some of the coaches that were asked to coach the team. And so there wasn’t this compliance that has to go between players and coaches.”

This was all a case of Phil needing to #STAYME7O. Yeah the Knicks never sniffed a playoff spot while both Phil and Melo were with the team, which seems impossible to do with a star player in the NBA in a joke of a conference. But as long as you #STAYME7O, everything should work out just fine! Or something like that.

Whatever, the entire Melo saga was a disaster. At least the Bulls didn't get him since he was probably exactly what they needed.

There was no mention of Kristaps Porzingis, Joakim Noah, or any real James Dolan stuff that I would consider blog worthy. But there is apparently a Part 2 coming which hopefully delves into all that as well as:

1. How the fuck a dude with millions of dollars and a chronically broken body could get caught riding the bus like a schlep in New York?

2. What were his thoughts on this?

3. Can he finally admit that this was a fucking TYPO?!?

God dammit I hated going back through that vortex of basketball hell. Positive vibes only for the rest of the day or at least until Part 2 gets dropped. The Knicks are the 5th seed in the Eastern Conference more than 3/4 of the way through the season, have a young roster with a ton of flexibility, a proven coach with a solid staff, and a front office that actually knows what the hell they are doing. So I am actually thankful for Phil reminding us just how much he sucked at his job. Nothing but good times ahead. Now buy a shirt and get excited!