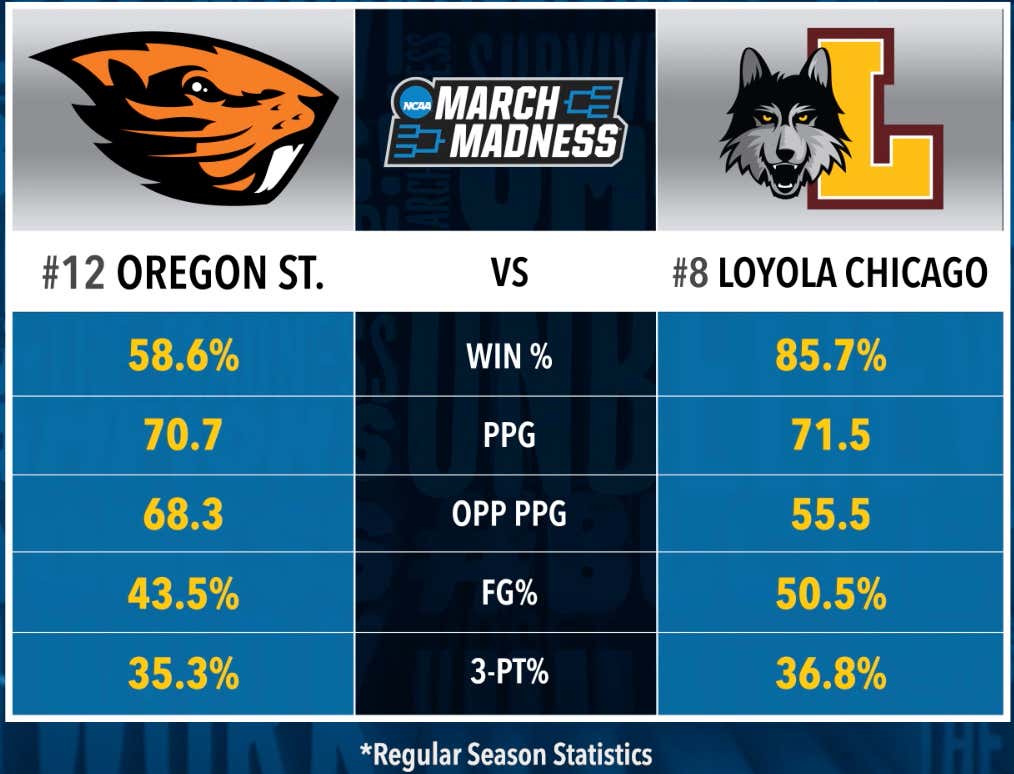 Tomorrow's a big one for The Illinois State Champ's, aka "The Pride Of Chicago", aka Porter's Boys, aka The Loyola Ramblers.

2:40pm Eastern tip off for the boys as they battle it out with Oregon State in the Sweet Sixteen at Bankers Life Fieldhouse. This will be the first time these two schools have played each other.

If you had this Loyola Chicago vs Oregon State matchup on your bracket you're either full of shit, or you had your receptionist Gladys fill it out for you. Smart people, ahem, might have had Loyola here, but very few saw Oregon State knocking off #5 seed Tennessee and then #4 seed Oklahoma State to get here.

Which shouldn't come as much of a surprise to everybody as it might seem.

Oregon State has been shocking people the entire month of March. They went on a run that began right at the tail end of their season, and through their run on the way to claiming the Pac-12 conference championship. (They've been underdogs in their last 8 games, winning 7 of them outright. Their only loss was to Oregon)

The Oregon State Beavers smothered Oklahoma State in their last game, much like what Loyola did to Illinois. Ethan Thompson had a game-high 26 points for them, with Jarod Lucas adding 15, and Maurice Calloo contributing 15 off the bench.

As a team they only shot 41% but their big men, Warith Alatishe, Dearon Tucker and Roman Silva absolutely dominated in the paint with a combined 25 rebounds and 10 blocks.

You'll be hard-pressed to find a more focussed or disciplined team than Loyola in this year's tournament.

I won't continue to beat the drum I've been beating since December trying to tell the world this Loyola team was the real deal. The same time Sister Jean extended the olive branch to Pres.

By now we all know who this Ramblers team is.

Loyola showed the nation why they've been the best defense in the country this season after holding Illinois to their team scoring defense average of 58 points in the loss they handed them. They forced 17 turnovers, had 12 steals, and held Illinois to a measly 44% shooting.

They came out the gates aggressive and dictated the tempo. Which is exactly what they'll do here.

Granted, Oregon State plays a similar type game as Loyola- strong defense, work the clock for high percentage shots, force turnovers, so this game might be a slugfest. But I think Moser has his guys locked in, and Krutwig will once again be a force, with Williamson, Kennedy, and Norris chipping in, and Loyola continues their run in a close, low-scoring affair. Let's call it 61-56.

If you haven't got your shirt yet, order now because we're gonna sell out of these and you won't be able to get them for next weekend come Monday.