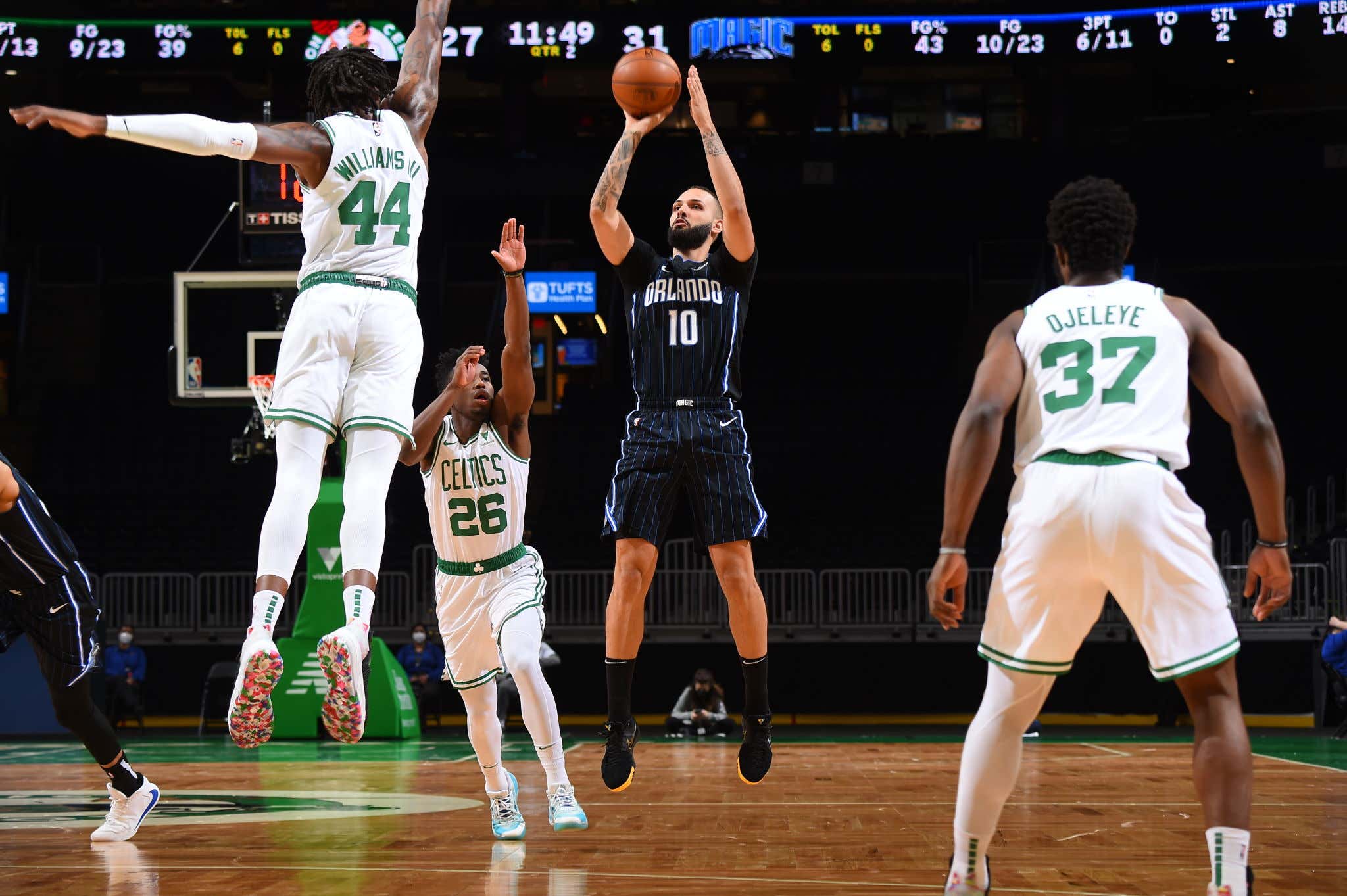 Heading into today, we all had the same wish. We all wanted Danny Ainge to get off his ass and find ways to improve this roster. It could have been a big time deal, a middle tier deal, or even just improvements around the edges. The point is, we just needed him to do something. There was no excuse not to. They do need to find a way to now trim a roster spot but I'm sure that's not going to be hard.

Finally, Danny Ainge did something.

Let's just get this out of the way early. Despite what you'll find on Twitter, adding Evan Fournier to this roster helps. They are better now than they were when we all woke up this morning. They gave up nothing of real substance in terms of players/picks, and the big gamble is the use of the TPE un someone who could theoretically walk at the end of the year. The hope is the team knows there is a future with Fournier and that's why they used a portion of the TPE, but that is still an unknown.

We also have to be realistic. Just because Fournier is now a Celtic does not mean he solves all their problems and it does not mean it's time to fire up the duckboats. But he without a doubt helps you. The sole ability to now give someone like Semi's minutes to a player like Fournier is a massive upgrade. I don't know how that's arguable. So now the question turns to, how can Fournier help?

- As a spot up shooter, Evan Fournier ranks in the 63rd percentile, shooting 42.6%

- Where he really flourishes is as a dribble handoff scorer. He's averaging a very nice 1.36 ppp on 57% shooting. That's good for the 94th percentile. So why should you care about that? Well as it stands now, the Celts ranked in the 51st percentile in dribble handoffs. They also run it fairly frequently at 5.2%, right under the Jazz. Think of possessions with Theis/Rob in the high post and guys running off them for handoffs. We see it all the time with the Jays and Kemba. Well now they have an elite option for that set which should drastically improve it.

- In 3 of his last 4 seasons, Fournier has shot at least 37% from three. This year he's at 38% and he was at 39%, all on good volume. For a team that desperately needs proven NBA shooting, Fournier provides that.

- His playmaking is what I would consider "meh". It's been better the last 3 years and he's at a career high at 3.7, so while that doesn't blow your dick off, just compare it to someone like Semi who was getting those minutes before. Fournier brings another guy who can add at least some decent playmaking to a team that desperately needs it, but it's not his primary strength

- It's not how I would use him, but Fournier does rank in the 71st percentile in isolation basketball. He's someone that can create his own shot when needed, which certainly helps.

- Maybe the most important benefit is what he will help do for the Jays and Kemba while on the floor. As we know, when you surround them with guys who are not offensive threats, defenses clog the paint and things get fucked up. Well now teams are going to have to respect Fournier. His shot profile is pretty good 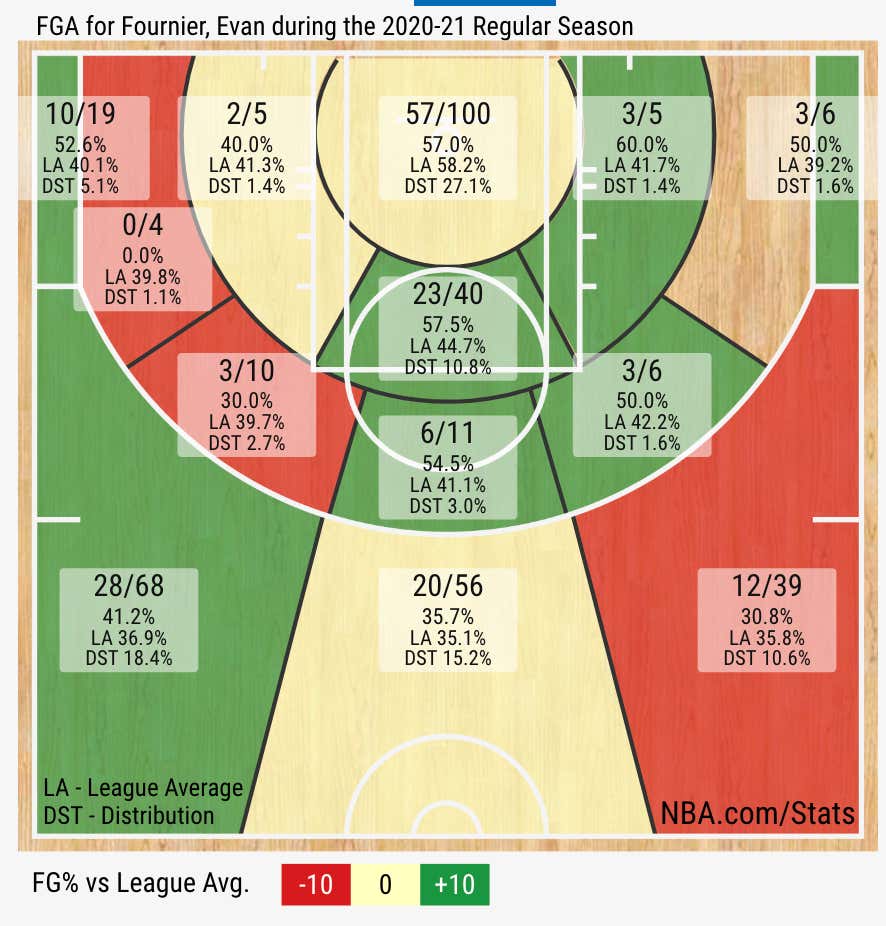 - Then there's the lineup flexibility. It gives Brad options. If Kemba doesn't have it on any given night, you can close with Smart/Fournier/Jaylen/Tatum/Theis or Rob. If you need to close with offense, you can go Kemba/Fournier/Jaylen/Tatum/Theis or Rob. The point is they now have a proven NBA scorer to add to the mix in the fourth quarter in clutch moments. That's HUGE. No more relying on Grant. No more relying on Semi. In theory, they become harder to guard in those scenarios.

- In the fourth quarter this year, Fournier is shooting 40/35%. Not great, but easily better than like half this Celtics roster.

- In the clutch, those numbers are 45/25%. Again, fine, but not something I would call exceptional.

But it's not ALL positive. Here are areas that concern me

- Fournier really struggles guarding isolation. You can target him. Opponents are shooting 62% in isolation against him.

- He's also not all that great at defending the P&R. Ball handlers shoot 49% against him, he ranks in the 34th percentile

- He's also never had a Dtg under 111 since his rookie year. By all accounts, I wouldn't exactly call him a lock down defender. That's not what he brings.

So there are a couple ways to look at this. On the offensive end, Fournier is a massive upgrade of what was currently available. What he does not do is really help you at all in your quest to stop playing terrible defense. Their wing defense is still a problem, but their 4th option/wing offense just got a whole lot better.

The point is, for a roster that desperately needed more proven rotational talent, Fournier fits the bill. We should all feel better about giving someone like Fournier minutes as opposed to what we've been seeing. But keep things in perspective. This signing alone does not solve all their issues that have this team two games under .500. There's risk when it comes to his future. But the fact that the cost to get him was basically nothing, it's a move that makes you better.

I also don't think you can discount how this might help the overall feel of the team. Ainge showed his best players he was willing to go out and bring in proven help. He made it clear he has not given up. Now it's their turn to step up their play. Smart, the Jays, Kemba, they all need to be better down the stretch.

Who knows what else might drop in the buyout market, but I'm not expecting much. We woke up today praying Ainge would do something to make his team better, and that happened. Now let's see what they can do with it.