(Source) A black woman relaxing at Oak Street Beach in Chicago and minding a group of children filmed a white beachgoer’s racist rant when the other woman became irate because the children had “splashed” her.

Raquel Bolton posted video of the encounter to her Facebook page, writing, “Wow the hate is real!” “I’m going to repost the video please share,” Bolton wrote. “Race has nothing to with ignorance . While at the beach ?#?oakstreetbeach? this lady called us the N Word three times in front of my children all because they splashed water on her.”

Soooo yeah, this is basically the worst person ever. Take away the fact that she’s an awful racist, just the fact that she’s one of those “read the constitution, it’s in my legal rights” type of people makes her the worst. Like the guy that will walk around with an AK-47 hoping a Cop stops him just so he can say he has a permit and a right to bear arms. Fuck those people and fuck this person. Scum of the earth through and through, oh and she’s a piece of shit racist to boot.

This picture of where she was sitting did make me laugh out loud though. Yelling at anyone who splashes her with water while sitting in the water, quite a strategy. 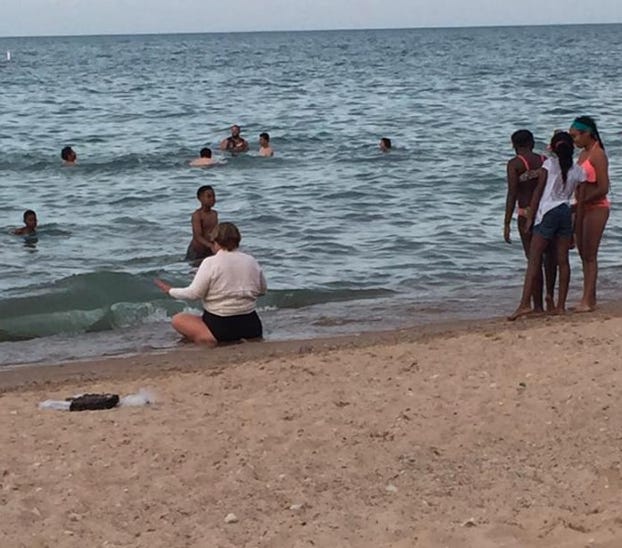 Any of the downtown beaches have to be pretty low on the list for places you should visit if you’re a racist no?