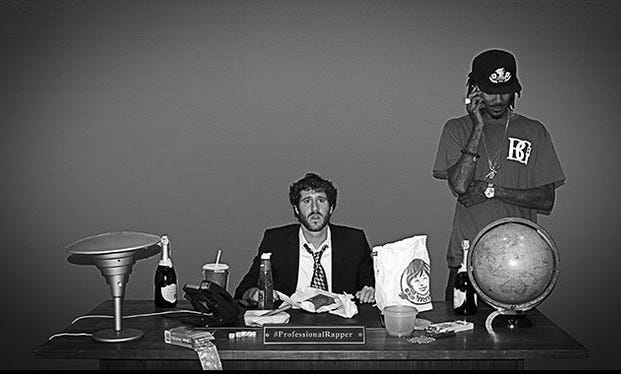 Everybody know’s Dicky is my boy. I think despite the fact that he’s a comedic rapper I think you could make the argument that he has the best flow out there right now. His full album dropped today. Professional Rapper. 20 tracks, $9.99. And its like an old school rap album that with interludes and skits and intros and shit that actually make it like a full listen. Just put it on and let it run. I’m gonna post youtubes of some of the songs that are already out there but dont be cheap if you’re an LD fan. Buy that shit.

If you’re a fan of Mailtime and Dicky – here’s our interview back in June and then some of this albums highlights:

Hilarious. Fucking hysterical. For every guy out there that gets laid because of their personality (i.e. 90% of us) this song is so fucking spot on. It might be his his most relatable song ever. Right up there with White Dude and Ex-Boyfriend.

More or less this song is Snoop interviewing Dicky. How a white Jewish kid from the burbs of Philly became a rapper. How and why he’s a rapper. What makes him different. Dicky kinda gets cocky with it and explains how his flow and his smarts separate him from the rest of the rap game. How he plans on doing rap in a completely different manner and tapping into entire new markets. Its actually a really interesting discussion/conversation they have all in the form of rap. And obvious its with a legend Snoop.

Pillow Talk – This is a weird ass “song.” 10 mins long but its a back and forth conversation he’s having with himself playing the role of a dude and a girl in bed after having sex. But the conversation quickly spirals from normal pillow talk to Dicky questioning whether earth has the weaponry to fend off aliens or the return of dinosaurs. He argues with the chick about the existence of God and shes trying to get an Uber home. I realize me trying to describe this doesnt sound funny but its laugh out loud shit when you listen.

Work (Paid For That?)

This live version doesnt include it but at the end of the studio version LD talks about his patented sucking of his own dick and how all rappers do it. The entire rap industry literally gives head to themselves. In the next breath he’s talking about how he thinks its crazy the President has to be openly Christian and how antiquated that is. Classic Dicky if you’re a fan.