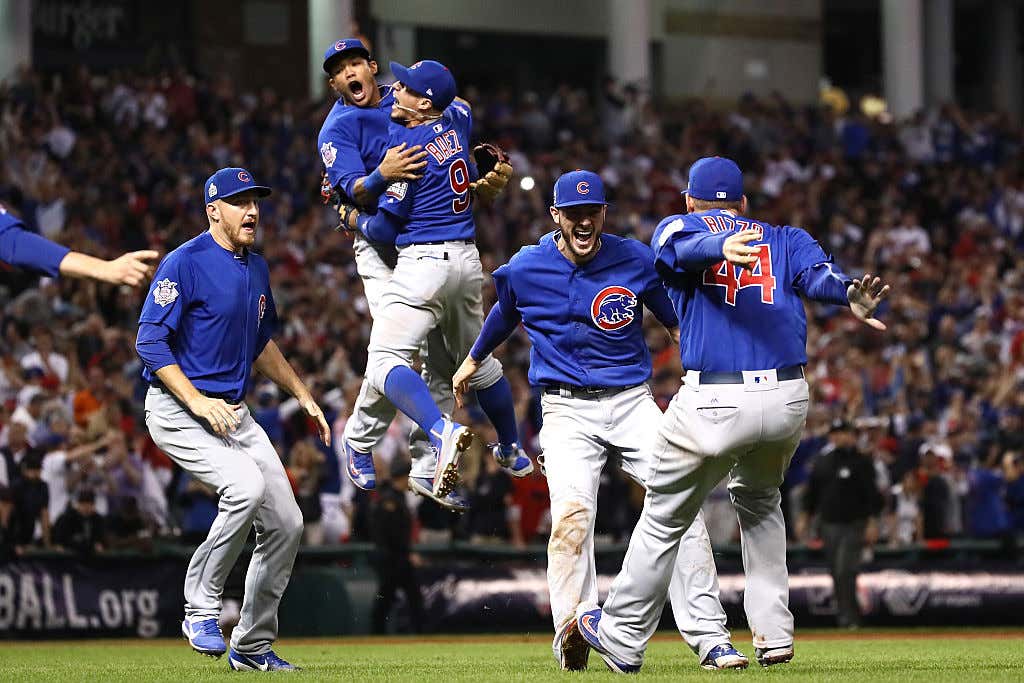 Take a good look at this picture. It's the perfect starting point for some stuff I want to get off my chest about the Cubs. Notwithstanding Mike Montgomery, you're looking at the four young infielders that represented the heart & soul of the Cubs core, moments after securing the clubs' first World Series Championship in 108 years.

Left to right we start with Addison Russell, the high-ceiling no-brains shortstop that seemingly pissed away 10-12 years of being an everyday big leaguer. Instead, he was recently released from the Korean League's Kiwoom Heroes after hitting .254 in almost 300 plate appearances. It's an immensely pathetic fall from grace for a one-time fan favorite. Ultimately some guys just don't have it in the long-run.

In his arms is Javy Baez. The electric sparkplug middle infielder that replaced Addison Russell as the everyday shortstop without looking back. To a lot of people he's BECOME their favorite player long after hating his big swing and misses. Long after you see him make countless web gems and do electric shit on the base paths. It took deep into his runner-up MVP finish in 2018 for the world to wake up on him, and even then it was because Addison Russell fumbled his chance. Otherwise it really never becomes his infield as he rotates through a platoon of 2nd and 3rd.

Next to Javy is Kris Bryant - the sex symbol MVP who impossibly managed to meet expectations. Finally a top draft prospect worth the billing. At the time of this picture you could argue he had two of the best years to start any baseball career ever. Rookie of the year. MVP. World Series Champion for the Cubs to end the drought. You don't write fiction to this extent because it's simply too unbelievable. And that's fiction. We're talking about the real life Kris Bryant. He's lived up to the hype.

And then finally there's Anthony Rizzo, a guy who needs no summary around town but gets one anyways because I'm on a roll. The first guy Theo made a move for in the rebuild. The most consistent Cub of my adult life. The face of the Cubs when We Are Good. The guy who took a team friendly deal because he wanted the playing time, then turned the playing time into being a gold glove/all star first baseman. One of the best and most productive corner infielders in the league. Just an absolute fucking machine top to bottom and he's done all of it in a Cubs uniform. There's no picture or no championship without Rizzo laying the foundation after doing all the excavation with a shovel and his bare hands.

One more look at the picture.

I bring this picture up because these were the four guys the Cubs were supposed to BUILD around. This was the infield that was promised to a generation of Cubs fans as we battled and conquered our way through historic division title runs. Theo would always source pitching on the open market, but never cornerstone players. They needed to be homegrown and groomed to the Cubs Way and these were the four dudes that came out on top. Five years after Theo took over, here's the core celebrating their first World Series Championship together. No doubt there'd be more.

Now it's five seasons later and we could legitimately be walking into the last season of anyone in this picture wearing a Cubs' uniform. Monty was collateral damage. Addison Russell broke my heart. But imagine having to part ways with all 3 of these guys at the end of the season. Because right now that's where things are headed and I want you to take one more good hard look at this picture with that fact in mind.

It's March 25th and the Cubs have not extended Anthony Rizzo, and the fact they haven't extended him says they probably haven't even been that close in the negotiations which is laughable. Rizzo has long been looking for an extension and has made very clear he wants to end his career as a Cub. It's also well known the Cubs are trying to keep the foundation intact while retooling (not rebuilding). Anthony Rizzo is that foundation and he said about two weeks ago that he wants to get the deal done before opening day. That's in one week. The lack of movement and volume of silence is collectively deafening.

It's March 25th and the Cubs have not extended Javy Baez despite his explicit wishes to remain in Chicago and a willingness to negotiate. Despite him being marketable and profitable and valuable and everything else… he's still a free agent this fall. The fact you'd let this guy go into a contract season and bet on himself is beyond crazy to me. We should have extended Javy years and months ago but instead we're going to roll the dice that his value doesn't rebound exponentially? I'm not on drugs but am I on drugs right now?

It's March 25th, 2021 and the Cubs have not made up their mind on Kris Bryant for the 4th consecutive season. Do we trade him? Do we keep him? Is he happy? The Cubs have dragged their relationship with KB from the start and that's putting it lightly. You can't manipulate service time and float trade rumors and then turn around and expect everything to be cool. To me that's just not being able to read a room, which is exactly how I interpret the Cubs treatment of Kris Bryant. It's been awkward from the very beginning and will probably stay that way til he leaves. Truly a sad situation when you consider his potential and accomplishments.

Where we go from here will be certainly interesting. Sure I was just as distracted this offseason as anyone. We lost Theo and apparently enough money to bring back Jon Lester. That is until everyone got pissed off so they signed Jake to cool us off, all while flip flopping Joc with Schwarber and trying to stick it to Ian Happ in arbitration. Add and subtract a bunch of other shit that makes you scratch your head.

In the meantime, the Ricketts family is teaming up with Penny Pritzker on a real estate development in North Lawndale. That may not seem like a big deal to many, but Penny Pritzker is JB's sister and ran hard with the Obama administration. The Cubs executive team has mutual friends in that office, but long have the Ricketts been subject to the conservative associations. We're not getting political but this project points in a new direction that I haven't seen from the Ricketts family in all of my years blogging about them. One that is above politics and truly into the next category of life: doing deals with the tier-1 global power players.

Or maybe I'm just reading a lot into the fact that this multi-billion dollar organization I love to death won't put together a gameplan to keep the best players under contract in the long-term while hiring architects to design 86,000 square feet of multi-use eco-friendly urban space. Maybe it's totally normal to treat some of the most historically important members of your organization like complete strangers who came from nowhere?

Certainly doesn't feel that way but I'm a man of options. A man of principle. I don't want to rule out the fact that I could be overreacting. I've been known to do that time to time.

But deep down inside I think something weird is going on. It's March 25th and all these dudes are starting the season on contract years? It blows my mind that's how the Cub want to do business.

1. Take care of Rizzo so he can match the Goldschmidt years in St. Louis

2. Pick one of Javy or KB and do the same to match the Arenado years

3. Re-load the bank accounts on the back of 16-inch softball lineups for a couple years

4. Splash free agency when cash flows return to normal and then again after Heyward's off the books

Three years from now under that model the Cubs should be catching the Padres and Dodgers downfall. Rizzo and (probably) Baez will be the circle that closes the gap. The starting and the ending point to make things right again as we ascend back to 95+ wins consistently. This gives time to focus on the farm system, trim some long-term fat around the big league roster, develop an actual bullpen all while gearing up for a couple of monster bats to come into the lineup. You have room and space to build your identity and veteran leaders there pushing the process along the way.

And if that's not enough then just friendly reminder Rizzo once gave Tom Ricketts $3,000,000. To me it's about that time he and his friends get paid back.