A few weeks back, I said the Yankees rotation is Gerrit Cole and a bunch of question marks.

Yankees fans didn't like that. I don't know why, it's a completely objective statement. I laid out the reasoning for said statement using facts and pushed all bias aside. Do I hate the Yankees? Yes. Do I want all of the bad things in life to happen to Mush and nobody else but Mush? Yes. But the latter has nothing to do with the former. The Yankees rotation is on giant lottery ticket outside of Cole and MAYBE Montgomery.

Without going into all of the reasons for each of their potential starting pitchers for a second time, just read my blog. I titled it, "The Yankees Rotation Completely Fucking Blows." But let's talk about Cory Kluber for the sake of shoving it up this asshole's asshole: 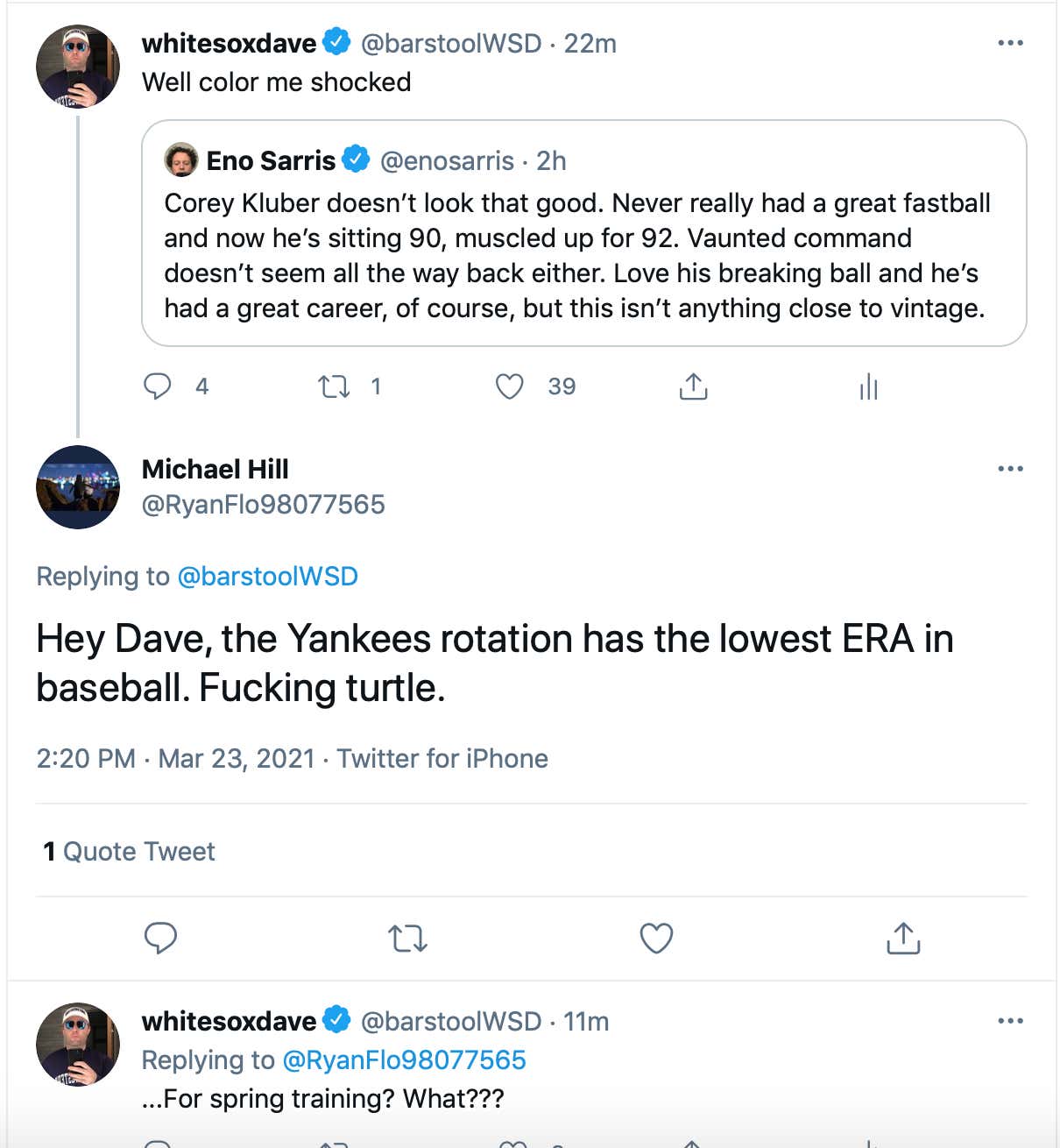 Anyways, today Cory Kluber looked like shit. I will not link the box score because it has 0.00% meaning. He could have given up 100 runs on 100 solo shots, but if he was vintage 96MPH Cory Kluber with that insanely filthy slider and Greg Maddux command, I wouldn't have cared. I'd have said, "shit, he might pull a Verlander resurgence this year"

But that's not the case. Let's check in with Eno Sarris:

Not good at ALL for the Yankees. I just said I wasn't going to link any stats from his start today because they're meaningless - well as I was embedding Sarris' tweet, I saw this reply:

Has Kluber already failed? No. But the early signs do NOT look good if he's only sitting 90 with shitty command. Spring training is to get work in. There are times when pitchers will more or less tell hitters what pitch they're throwing just to get a feel for said pitch prior to playing in games that actually matter. On the flip side, hitters will often work counts in an atypical fashion than they're used to, work on hitting behind runners, etc. It's not do or die in spring training, it's about getting reps in to get better for the regular season. They want to perfect their processes on the mound or at the dish prior to the regular season, stats be damned. Stats shmatz in spring training.

But you definitely want to see the physical shit that makes a player good or bad being flashed. Again, if Kluber were sitting 95 today and gave up 10 runs, Yankees fans should absolutely have an optimistic outlook for him this season. But he gave up no runs while sitting 90. I PROMISE you, in spring training, people who know what they're talking about would rather see the former in this scenario. Your margin for error throwing 95 with good command is LIGHT YEARS better than if you're throwing 90 with shit command, and Kluber is the latter right now. That's not me talking, that's Eno Sarris talking, and Eno Sarris is a "baseball guy" that really knows what he's talking about.

Once again, Yankees fans - it's Cole and then 4 question marks. Maybe 3.5 question marks if Montgomery stays healthy. And before you say "the White Sox suck, they're dog shit" blah blah blah let me just remind you that this has nothing to do with the Yankees rotation being asshole. For a fanbase that is completely and totally hellbent on success, you should be irate that you're entering the season with this rotation. Don't yell at me, yell and Hal and Cashman. I'm just the messenger. When the Yankees are DFA'ing Kluber come June, don't say I didn't warn ya.

That's all I have to say about that. For now. Next time something bad happens in NYY land, I promise you I will be all over it because I fucking hate the cock suckers that root for them.