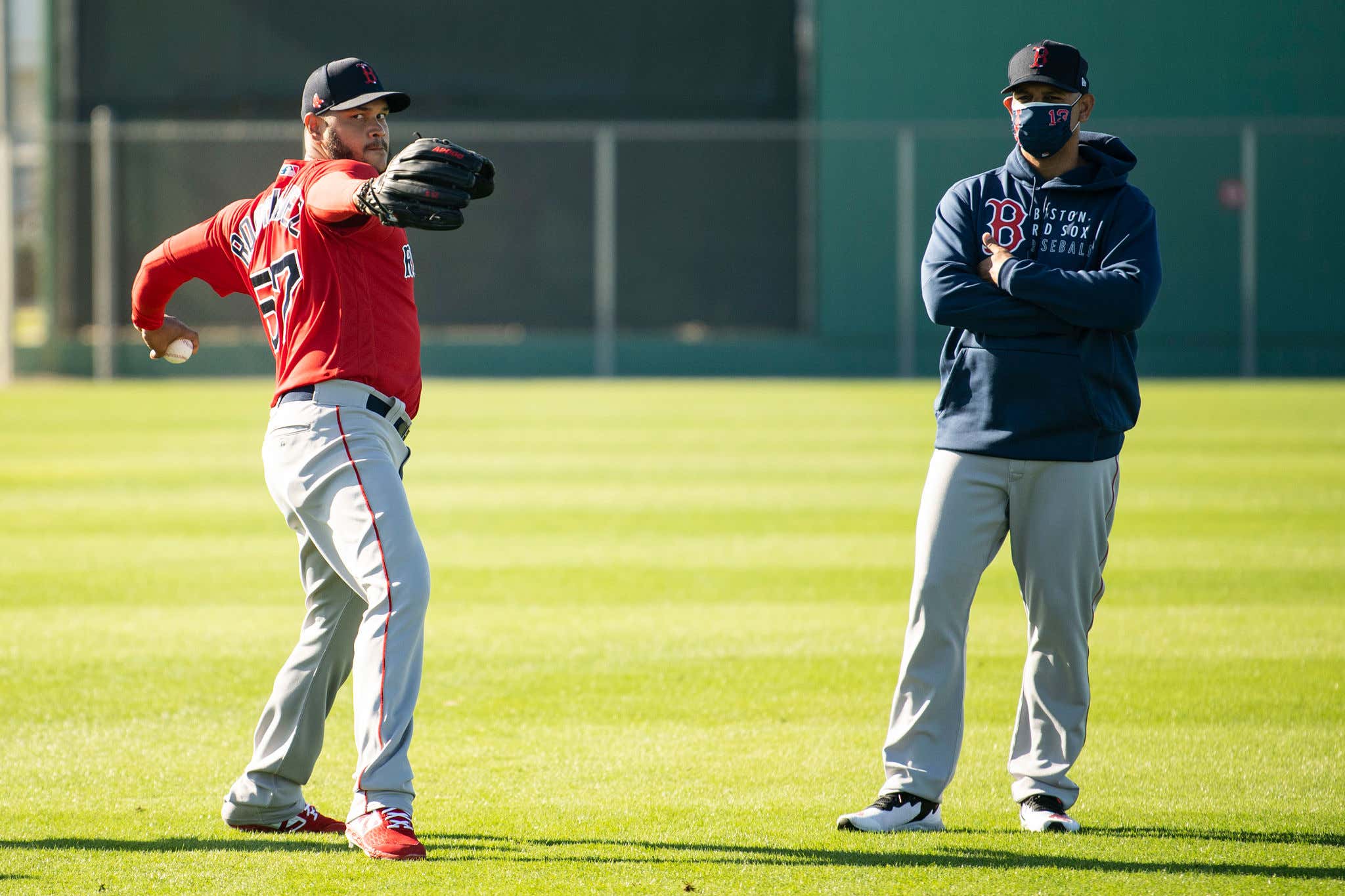 Bringing back an old annual feature that I did for a few years. Last year, let's face it. Nobody gave a fuck after the Red Sox traded Mookie Betts. We all knew that they were punting on the season, and you may still feel that way this year. My job here today is to maybe talk you into deeming that this 2021 squad will be worth your time.

The Manager -- I mean, where else were we going to start? This is storyline number one. Alex Cora is back. We'll see how this one evolves as the season goes on, but already the team just seems to have an entirely different vibe. I feel that as a fan watching, and the players obviously feel that, as they show up to spring training and have a refreshed attitude in their attempt to forget that 2020 ever happened, much like the rest of the world. Cora's return was obviously polarizing as he was returning from a one-year ban for his involvement in the 2017 Houston Astros cheating scandal, but the baseball world, for the most part, has moved on. AJ Hinch has a job in Detroit, and Cora is back where he belongs in Boston.

A manager can only do so much in regards to the successes and failures of a major league team, but you can already feel the difference in terms of the expectations this team has versus a year ago when they had a one-year, placeholder manager. It's not World Series or bust as it was in 2018, but there are shreds of optimism in that if everything goes right, this Red Sox team could surprise some folks. That starts at the top with the manager instilling that belief in his players. It's hard to get behind a leader that you know is only there for a year. And it was a year that the players weren't so excited about to begin with, and then they started playing baseball. That's changed in 2021. At least, to start. We already know Cora is making a difference, but how much of a difference is he going to make?

Rotation -- It's not the rotation that we saw in 2018. It's not decorated with multiple Cy Young award winners and pitchers that would be considered an ace if you placed them on any staff in the game. However, I don't think it's as bad as some are making it out to be. Sure, you have Chris Sale waiting in the wings to return from Tommy John surgery this summer, but I think it would be wise to proceed with that the same way the Red Sox have themselves. Like he's not coming back at all. I'm not saying he won't return or that he won't be productive when he does, but the Red Sox built a rotation that is constructed to survive without Sale, if need be. When Sale returns, what kind of pitcher are we going to see?

I've seen some fans chirping Boston about having done nothing to address their starting pitching woes from a year ago, so let's tackle that notion. They're getting Eduardo Rodriguez back. That right there is adding a frontline starter for absolutely nothing. Not a prospect, not a free agent dollar. After sitting out last year with Covid and then complications from Covid, Rodriguez is set to return to the rotation, and let us not forget where we left off with the lefty. His last full season in the big leagues in 2019, he was a blown save away from a 20-win season. And yeah, wins aren't a measurement that anyone should use to evaluate a pitcher's season, but wake me up when a 20-game winner has what's considered to be a shitty season.

For the first time in his career, Rodriguez eclipsed the 200-inning mark, striking out 213 batters in 203.1 innings with a 3.81 ERA (3.86 FIP), a 1.33 WHIP and made all 34 of his starts. I'm not going to expect that kind of durability from Rodriguez in 2021 given what he dealt with last year, but the numbers? I think he can be even better. Have we already seen the best of Rodriguez, or are we in line to see a breakout season that's even better than what he put together in 2019?

Beyond Rodriguez, you've got Nathan Eovaldi returning for his fourth season in Boston. Seems like just yesterday he was a trade deadline acquisition that was met without much fanfare before becoming an October legend just a few weeks later. What we've come to know him as now is a pitcher who will inevitably battle injuries and put up otherwise pedestrian numbers. It's never made sense to me, as Eovaldi has a 100mph heater, yet he can be quite hittable at times and not punch out as many batters as one would expect with that kind of stuff. It'd be nice to see him put together a season that matches the talent that he possesses, but at the age of 31, he probably just is what he is and that's an around a 4 ERA guy that is nice to have as a number three starter. Will we see Eovaldi stay healthy for a full season and harness his October heroics in the regular season, or will it be more of the same?

Garrett Richards is one of the more intriguing additions that the Red Sox made this offseason. It's been quite some time since Richards has been a dominant starter in the big leagues with injuries plaguing him for half a decade. This is one of those moves that I think Chaim Bloom is going to become known for in Boston. You look at the back of the baseball card and you might wince at the number of missed starts over the last five years. Why give a rotation spot to this guy? Well, if he's healthy then he's healthy. It's a lottery ticket. His shit still plays in the big leagues. Richards has had some control issues to start spring training, but has shown signs of figuring some things out, as that's what this time of the year is for after all.

So, what's the line at here? Twenty starts? Can we get 20 starts out of Richards this season? Would you be happy with 20 starts out of Richards? I get that you might not be happy with 20 starts from one of the five starters you broke came with, but it would be the most starts that he's made in a single season since 2015. It's been a minute. Boston will have to depend on their starting pitching depth to fill in the gaps here between Eovaldi and Richards, because it's going to be a goddamn miracle if you get full, healthy seasons out of one of them, never mind both of them. But you never know. Will Richards be the diamond in the rough signing that Bloom hoped he would be?

To round out the rotation here, Martin Perez is back. Yes, Perez Day will be returning to a NESN broadcast near you. I've got high hopes for Perez. I do. There's just something about a player who actually wants to be here and makes an honest effort to connect with the fans. That's not a shot at anyone in particular, so don't read into that. I just love what Perez brings to the table in terms of being open about loving pitching for the Red Sox, engaging with the fans on Twitter and he's just an all around delight to watch in behind the scenes content. What to expect from him performance-wise, your guess is as good as mine. He was solid at times and he was not so solid at times last year, but he's not being asked to go toe-to-toe with Gerrit Cole in the stats department, although he kind of did for a couple months last summer. If anything at all, Perez is one of my reasons to watch the Red Sox in 2021. Perez Day is a social media experience unlike any other. He can do no wrong in my eyes. Will Perez one day get his number retired in Boston?

Then you've got perhaps the most intriguing name in this blog, and that's Nick Pivetta. The right-hander came over in the Brandon Workman-Heath Hembree trade last summer and the fact that it was reported that the Rays made a valiant effort to acquire him before he ended up in Boston has me quite excited about what he might become. Pivetta is out of options, which means he'll be given a shot in the Red Sox rotation to start the year, and he's looked pretty good in the small sample of innings he's worked this spring, punching out eight batters in nine innings. If Bloom works his magic here with Pivetta, I can absolutely see him becoming one of the more pleasant surprises for this team in 2021. Will Pivetta evolve into the pitcher that the Phillies once thought he would?

I did mention some depth options in the case that one or more Sox starters couldn't take the ball. First name up is a guy you're familiar with (or maybe you're not because you didn't waste your time with the 2020 season), and his name would be Tanner Houck. This kid came up last year and absolutely shoved in three starts, striking out 21 batters in 17 innings with an 0.53 ERA, 0.88 WHIP and allowed just one run on a solo homer. That was it. He might've been the only bright spot of the whole season. He looks like a right-handed Chris Sale out there, and that's not an exaggeration for effect. It's also worth noting that Houck's fastball averaged 93.21mph and he maxed out at 95.99mph. He'a already hit 98 on the gun this spring. Under different circumstances, Houck more than likely breaks camp in the rotation just because of those three starts alone last year, but again, Pivetta is out of options, thus he gets the first crack at it. How soon until we see Houck, and does he have a shot at putting up the best statistical numbers of any pitcher in the Red Sox rotation this year as a guy who didn't even start the season in the rotation?

Next up, we'll be taking a look at the storylines for the Red Sox outfield so stay tuned for that.