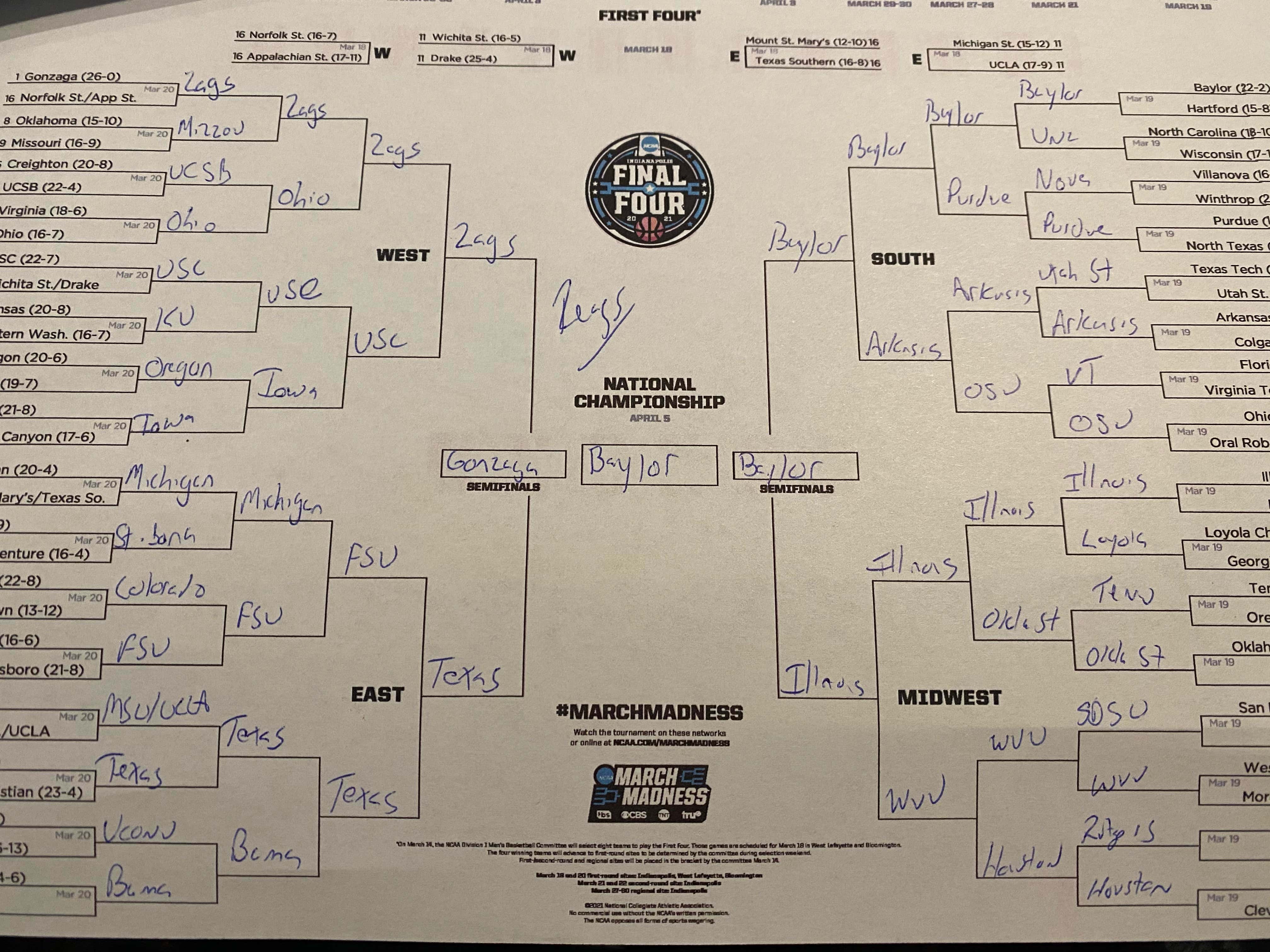 Another year, another public bracket to humiliate myself. Now to be fair, we have had two very successful runs the last two Tournaments. We hit Virginia as a preseason future, we hit Nova as a preseason future. If you tailed, you had a good bracket. The 2017 version? Not so much. Just for comparison sake here are the old ones:

I’ll say this. I have ZERO faith in the bracket this year. I hate it. I tried every which way to figure out how to mix it up, get some upsets going later in the Tournament but all I keep seeing is chalk late. It happens some times. There's a reason so many No. 1 seeds make the Final Four.

Quick breakdown of the regions:

- How the hell does Gonzaga not get out of this region? It's impossible for me to find a way for them to lose. They already beat the 2, 3 and 4 seeds. They don't have a terrifying matchup at all. Even the 5 seed Creighton is a bit of a mess right now.

- I'm fading Kansas because of COVID. They are at their best with Jalen Wilson, we've seen that all year. He's out for the first weekend. That's why I'm taking USC. They have a ton of talent and I think they match up well against USC.

- I wanted to take Oregon over Iowa, but they can't stop Garza. Their wings are huge mismatches for Iowa, but Garza is the ultimate mismatch. Then we're going with USC over them because the Mobley brothers can defend Garza. That's how you stop Iowa. Look at what Indiana, Illinois, etc all did to them.

- This is the region of anarchy for me. I'm basically playing it as Michigan not having Isaiah Livers and that's a massive loss. I've talked about it before but what makes Livers so important is his ability to shoot and it gives Dickinson a ton of space in the post to work. Johns doesn't give that. Now you throw FSU's size and defense against Dickinson and I like that matchup

- I want Georgetown to win. I want Ewing to get that thing rolling. College hoops is better with Georgetown good but Colorado has McKinley Wright. They win that game.

- I'm going to hate taking Texas but here we are. They have the guard play. Jericho Sims is drastically improved. They have top-end talent. I also think Alabama can be a huge challenge for Texas. That game is really the Elite Eight for me, but we're going to go with Texas.

- I'm going Utah State over Texas Tech. Chris Beard is the 2nd best x's and o's coach in the Tournament but Utah State is a tough matchup for them - Queta especially.

- Arkansas getting Jaylin Williams back is huge. He's probably their 2nd best defender. A great rebounder. That matters against Utah State (or Tech) and Ohio State assuming it all holds true.

- Everyone and their mother is going to have Illinois. Call me a sucker but I couldn't find an upset here. I don't trust any team in the bottom half of the bracket. I wanted to take Oklahoma State, but I think Illinois matches up well against them. I really wish Oklahoma State was on the bottom half.

- Speaking of the bottom half. I wanted to move San Diego State in the Elite 8 but they are either losing to Cuse or getting there. So I played it safe and moved WVU there. I know WVU is inconsistent, but Huggins is pretty good in the Tournament. We trust that with McBride and Culver.

- Same goes for Houston. Would it surprise me if they get to the Elite Eight? Absolutely not. But look at how Memphis bothered them. WVU is a better Memphis. That's why I'm picking WVU there.

- I went Baylor just to stay alive. Everyone is going to have Gonzaga and they are the favorite and have the easiest draw to the title game. But Baylor before the COVID pause was right there with them. I'm essentially banking that they figure it out and get back to that.