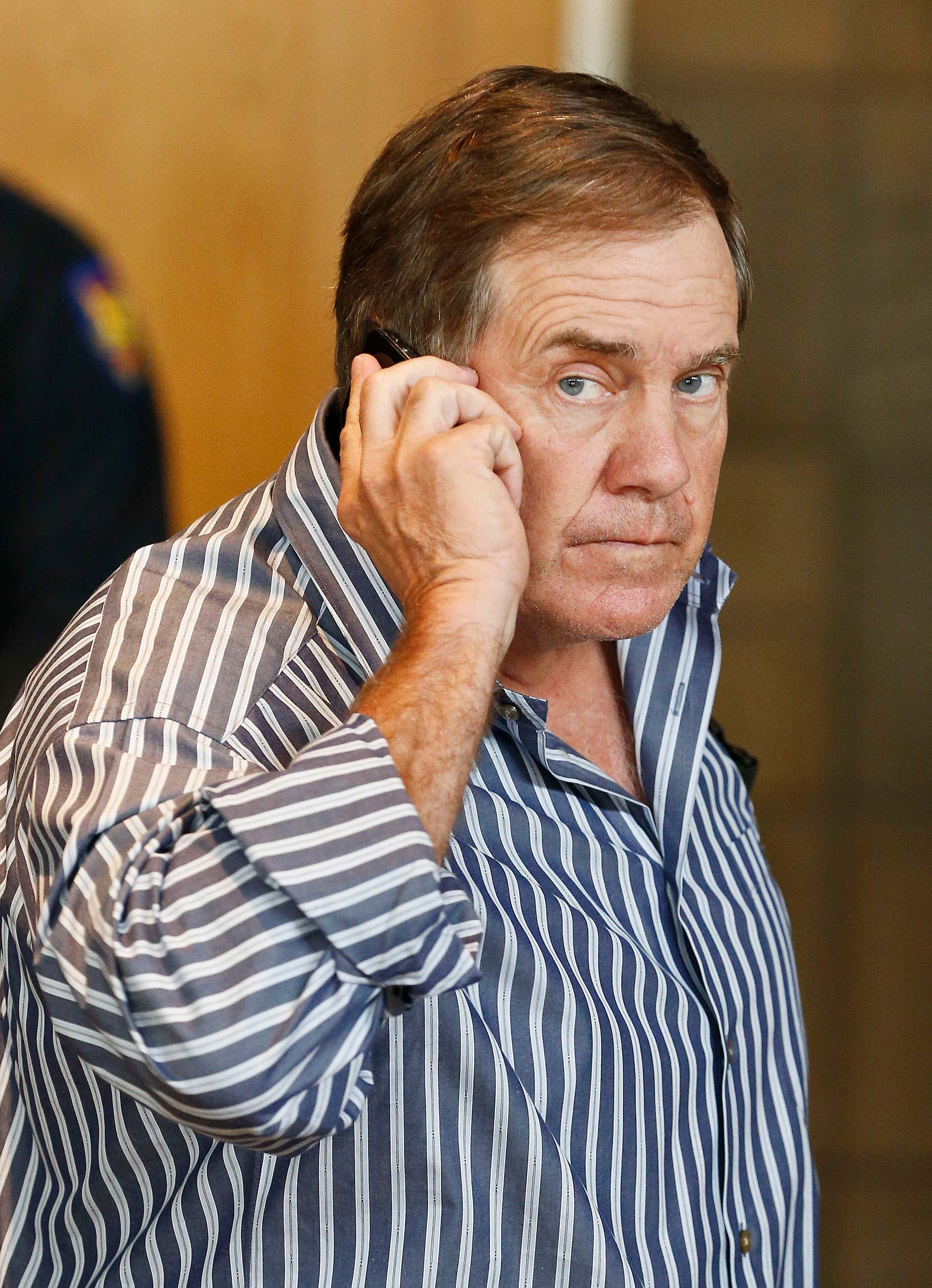 We've had a night to sleep on yesterday's insane day of Bill Belichick unprecedented whirlwind shopping spree, I'm still trying to process what we have been witness to. I thought/said/hoped he'd be aggressive once the market opened. In my wildest, wettest dreams, I never imagined this. He gave out money yesterday like Jimmy Conway walking through the casino the first time he meets Henry Hill.  Here's the tally from Days 1 & 2 of the Patriots Supermarket Sweep thus far:

I have a buddy who gets blackout drunk sometimes at home from crushing Miller Lites while watching Bruins games. And when he does, he finds he likes to go online shopping. Then days later he'll get surprise packages from his past, drunken self. One time he got a bowl where the milk sits in a special reservoir so the cereal is always crunchy. And another time he got six Batman t-shirts. That's what this is like. I woke up this morning trying keep track of all the purchases and was like, "Wait. They got Henry Anderson from the Jets, too?" Then they add my top choice in Hunter Henry this morning, and my brain is tapioca from all the winning.

Seriously, it's a little unnerving. In a good way. Adding so much talent to the roster all at once is like coming up too fast from scuba diving. Especially when I've spend the better part of 15 years on here conditioning myself to the fact that this time of the year brings nothing but disappointment in New England. Big names leave and are replaced weeks later with reasonably priced practical items out of the "Reduced for Quick Sale" bin. So forgive me if I'm having a hard time acclimating myself to the fact now we can have nice things.

But there's another side to this I want to dive into. And that is all the myths about the Patriots Dynasty, both past and present, that all this activity is busting. In no particular order:

Myth No. 1 No One Wants to Come to New England Because it's Not Fun

I can't pinpoint the exact moment this narrative was created. But it spiked in 2017 when Cassius Marsh was released and said he was happy to be going to the 1-11 49ers. Went up after the Super Bowl when Lance Johnson famously said the Patriots general grumpiness is the reason the Eagles won the Super Bowl (still having a good time, are ya?), and peaked with all the sunny positivity and upbeat success that went on in Tampa a couple of months ago. And plateaued when Matthew Stafford put the Patriots on his "No Trade" list. Because after two-plus years of Matt Patricia (who's back in New England), he had zero interest in running laps, practicing outside in the snow and freezing rain, and getting "No Days Off." And it was assumed that most of the players in the league shared the sentiment.

But explain this then:

If the Patriots were truly running Kamp Krusty, with sadistic overseers threatening the campers into forced labor and meals of cold gruel, why would all these guys voluntarily come to Foxboro? Trent Brown took a paycut in order to be brought back. The rest of these guys signed before they'd fully tested the market. Henry was one of the most sought after free agents on the market. All were willing to accept the rose before actual free agency began for a reason. That reason being that this is still the destination for players who are committed to football, serious about winning, and dedicated to treating this like a job, not four years at a party school. Which brings us to:

Myth No. 2: The Draw of New England Was Always Just the Chance to Play with Tom Brady

So this, for example:

In no way am I suggesting Brady isn't a bright, incandescent light that attracts talent like moths. He clearly does. Gronk, Leonard Fournette, Antonio Brown and Shaquiel Barrett are just a handful of examples of his powers of attraction. But right now, Belichick is the Black Hole at the center of the football galaxy to which everyone is gravitating. And this while his quarterback situation is as up in the air as any team's in the league. Cam Newton is back, but on a minimal deal that could easily allow him to be replaced. A very fluid QB situation around the league  is constipated at the moment, with a lot of flow expected once the first bowel moves. (Sorry. That analogy got away from me. "Anal"ogy? Oh, never mind. Moving on …) There are any of a half dozen veteran options still possible, as well as the possibility of a QB coming in the draft. This is exactly the sort of arrangement that should be Free Agent Repellent. Henry said pairing with the right quarterback was a big priority for him. And yet there Brady is in Florida, and all the free agents are coming to play for Belichick. Which then brings us to this:

Myth No. 3: Belichick Has Not Been Working Hard This Offseason

I'll admit that this one is pretty specific to the anti-Belichick extremists in the Boston media and the mentally ill who have sports radio stations phone numbers saved in their contacts. It's been an updated version of this, from two years ago:

The narrative being that Belichick went on vacation, reportedly to the Caribbean, after the season. Then he was not one of the four NFL coaches who went to the Senior Bowl in person (the two staffs actually coaching the game, plus two others), only sending scouts instead. Then the Patriots were not among the 30 teams that had representatives at Trey Lance's Pro Day last week. Connect those three dots, and there could only be one picture that emerges: He's mentally checked out. Watching Brady and Gronk making sweet bromantic love under the palm trees broke him. There's been wild, hysterical speculation he's mad at the Krafts for their persistent meddling and ready to let Steve Belichick take over and just generally ready to burn the franchise to the ground. Or something. When the truth is, those of us who've been saying he's going to show us proactive aggressiveness like we've never seen before (I pat myself on the back on this one) have been proven right. And the only thing he's burned to the ground has been the entirety of the NFL Legal Tampering period. He kicked in the door and took a flamethrower to it. Which leads us to:

Myth No. 4: The Patriots Don't Pay

This has been perhaps the single most pervasive myth about the Dynasty. Because they'd tended to stay away from the biggest name free agents and shown willingness to let their own players walk, they got a reputation for being cheap. When what they've really been is business savvy. They spent to the cap as much as anybody. And when the situation and the player warrant it, they'll pay top dollar. At various times Brady, Gronk, Vince Wilfork and Logan Mankins became the highest paid players at their positions in history. Darrelle Revis and Stephon Gilmore have been way up there. Dont'a Hightower was the highest ranked free agent a few years ago, tested the market and was brought back for what the other teams were offering. It happens. But as I mentioned yesterday, Peter King listed Trey Flowers' $90 million deal in Detroit (in two seasons he's totaled nine sacks) as the most expensive mistake of the last three years. For the millionth time, they'll pay. They just refuse to be stupid about it. They'd rather build a solid foundation with a deep roster and a strong middle class than eat up a disproportionate amount of cap space on a few elites.

Argue that this approach has failed more than it's worked, and we can have a discussion over beers. But the myth that this organization is cheap should be dead, once and for all. Finally:

Myth No. 5: The Patriots Overspent This Time Around

Again, it's the "We can't have nice things" argument. Some in New England are unnerved by all the spending. Like a grandfather who lived through the Depression and, even though he's got huge nestegg in his Roth IRA, he still insists on saving tin foil in case there's a shortage again. It's hard to get used to the idea that they actually have this money to spend. So the natural reaction is to assume these are all terrible deals. Like something Dan Snyder would pull. Or the Jets would do in order to get mentioned on the back of the New York tabloids. But are they really over market deals?

I don't want to get too deep into the weeds of what every signing is compared to the rest of the market. Not because it would prove they did overspend, but because it's confusing and boring and you'd hate to read it almost as much as I'd hate to dig through all those numbers. I will point out that in guaranteed money for the truly big ticket guys on this list, Henry's getting $25 million, Jonnu Smith is getting $31 million, and Matthew Judon is getting $32. The rest, as far as we know at the moment, are all at around $10 million or less. But that's subject to change. Those are some scary numbers. Especially for those of us who remember the mess Belichick inherited in 2000. So much guaranteed money was being paid out to guys no longer even on the Pats roster that he could barely free up cap space even by cutting guys. And he said the 2000 roster fit under the cap "by about $400 bucks" or something.

There's simply no way GM Bill would put Coach Bill in that situation again. My go-to resource on this topic (along with everyone else's) @PatsCap has them still at $56+ million of space, subject to more data being processed:

And it's worth noting that at the moment, Over the Cap has New England still listed as having the third most cap room for 2021, the second most in 2022, third in 2023 and plummeting all the way to fourth in 2024. Again, subject to change.

More to the point, here's a Trader Joe's sample-sized taste of what some of those guaranteed Kraftbucks bought us:

So let's not spoil this party by letting all the negativity built up over the last 12 months or more get to us. Enjoy this rare moment. For once the Patriots aren't reacting to the market, they're setting it. They've put the rest of the league on notice that they've been saving up for this moment and taking full advantage of it. And that's a pure good.

These myths are BUSTED. #KisstheRings