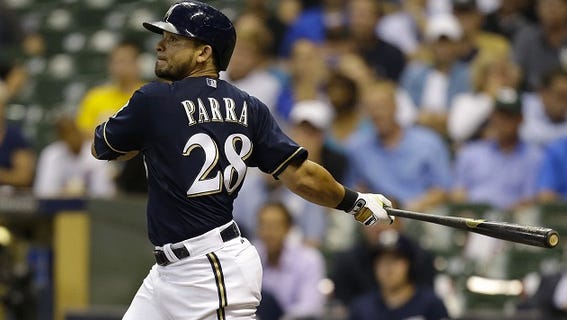 The question leading up to today was will the Orioles be buyers or sellers at the deadline. Looks like they are buyers, making this move for Gerardo Parra from the Brewers for minor league arm Zach Davies. Scooping up Para really, really helps this team. You’ve read me talk about it 4,505 times- minus Chris Davis who is a natural first baseman, the corner outfield spots have been garbage. Hopefully this ends the Chris Parmelee (who might be the worst player in the entire league) or Nolan Reimold experiment, and we can move Chris Davis back to first.

Parra is a solid defender, he’s 28, but a free agent after this season. It will be important to get him back and I think they can for cheap. He’s batting .328 with 9 homers and 31 RBI this season while leading off for the Brew. Hopefully this ends the Chris Parmelee or Nolan Reimold experiment, and we can move Chris Davis back to first.

Zach Davies will be headed to Milwaukee in the deal. He’s a good young pitcher with some potential, but hey you gotta break some eggs to make an omelet right? The Orioles are just 6 games back of the injured ass Yankees in the East and 2 games out of the Wild Card. Getting a guy like Parra who can play the outfield and get on base regularly definitely puts the club in a better position to win ballgames.

O’s are still interested in Ben Revere from the Phils too, so we will see what else goes down from here.