So there was a lot going on during the reveal show so I wanted to gather my thoughts and put together a reaction blog on everything. This is an effort just to make it a little more clean. So let’s get right into it. We’re going to do general thoughts and then region by region thoughts.

- Felt like the 1 and 2 seeds were set coming into today it was more just how would the overall seeds be. No real problems at the top half of the bracket. Also I like how what feels like the first time the No. 1 overall seed (Gonzaga) has the easiest region and the No. 4 overall seed (Michigan) has the hardest. More logical thinking like that please.

– Shout out getting right into the brackets. Didn’t have to deal with the bullshit of waiting

- How did Wichita State get in again? That's the one that doesn't make sense to me. Their resume doesn't make much sense. Louisville being left out also has nothing to do with Mitch Barnhart being the committee chair this year, but I love the conspiracy. I want nothing more than Louisville fans losing their mind at Kentucky right now. Long live rivalries.

- I got some problems with seedings though. Syracuse getting a bye over Michigan State? That makes no sense at all. LSU as an 8 seed? And most importantly how the fuck is Oklahoma State a 4. They need to be at least a 3. It's like the committee just didn't care about the last month from Oklahoma State. They 100% have a better resume than WVU, a team they beat twice in a week and are behind them. None of that makes sense to me.

- Rick Pitino being the LAST team announced and Louisville being the first team out was high comedy. Well done producers.

Again, I get you have to put the top 3 teams from each conference in a different bracket. Fine. Do that, then just go with the S-Curve completely. It's the logical way to do it. 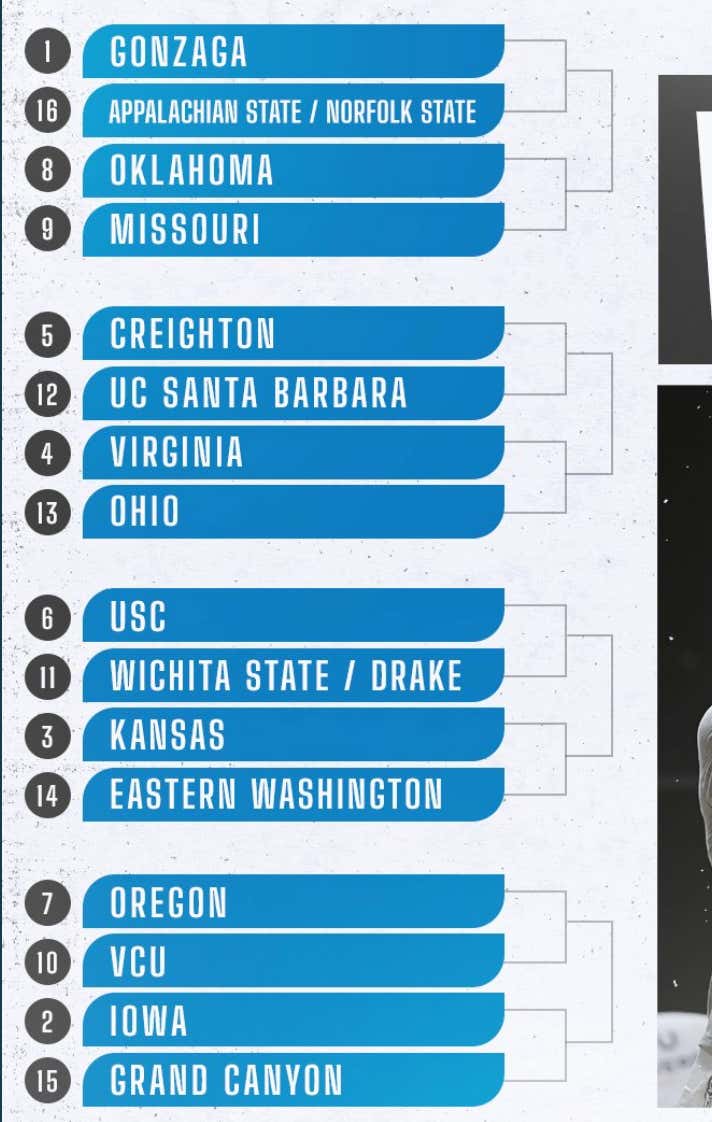 - Interesting they put Virginia and Kansas, two teams that had to drop out of their conference tournaments and weren't sure if they'd be eligible to play based on COVID in the same region. I assumed they'd separate that just for caution.

- This is a REAL favorable draw for Gonzaga. Yes, Oklahoma was hot at a time, but their defense of sagging and daring teams to shoot isn't how you beat Gonzaga.

- If I'm Iowa I'm not real happy about seeing Oregon as my 7 seed. That's a top-15 talent team who wasn't healthy and is vastly underseeded. That's a team that can make the Sweet 16. The bottom half of the bracket in general can get real messy with USC being inconsistent and Kansas having COVID problems.

- Like I said, this is by far the easiest bracket for a 1 seed. Every matchup sets up perfectly for Gonzaga here. Barring an injury or pause, it would be a legit failure if they don't get out of this region. 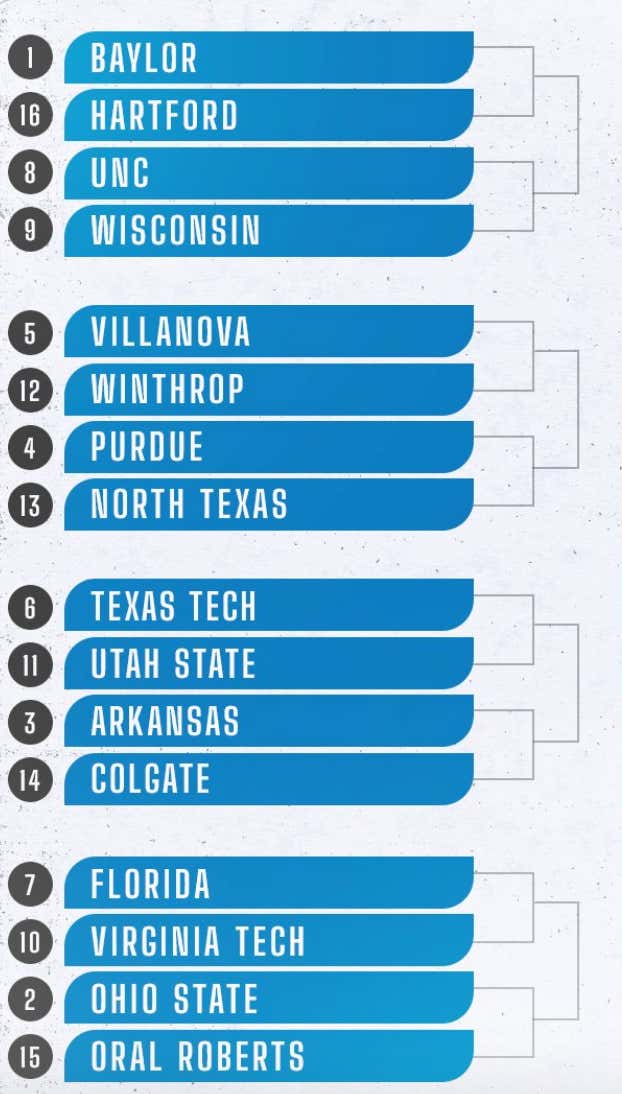 - Give me all of Arkansas/Colgate. Both teams get up and down the court and are awesome on offense. That game could legit be in the 170s. Yeah it's a 3/14 but that's a beautiful basketball matchup.

- Everyone is going to pick Winthrop over Villanova and it still feels like it's the right side. I hate that. Debbie in Accounting lives to pick the 12 over the 5 and this is the one. Nova's injuries are a dagger here and Winthrop has a guard in Chandler Vaudrin that is a walking triple-double and a big guy in Burns who is awesome.

- Good luck figuring out the bottom half of the bracket. I completely get why Texas Tech is a 6 seed, but we've seen them beat top teams. Ohio State has been getting leads and collapsing late. Arkansas has been hot but people don't trust SEC teams. You can tell me any of these 3 teams make the Elite Eight.

- Florida vs Virginia Tech is the most 7/10 matchup of all time.

- UNC's bigs are going to give Wisconsin all sorts of trouble. Assuming they beat them, their offensive rebounding can be a huge problem against Baylor. Baylor is actually an average at best defensive rebounding team. With development of guys like RJ Davis, Sharpe, etc., UNC can be a bit of a problem in that 1/8 game.

- Purdue's draw to the Sweet 16 is actually favorable. They are a quiet 4 seed and get a North Texas team that had to win 4 games in 4 days to qualify. Then they get a banged up Nova team or Winthrop. Feels real favorable for Purdue there. 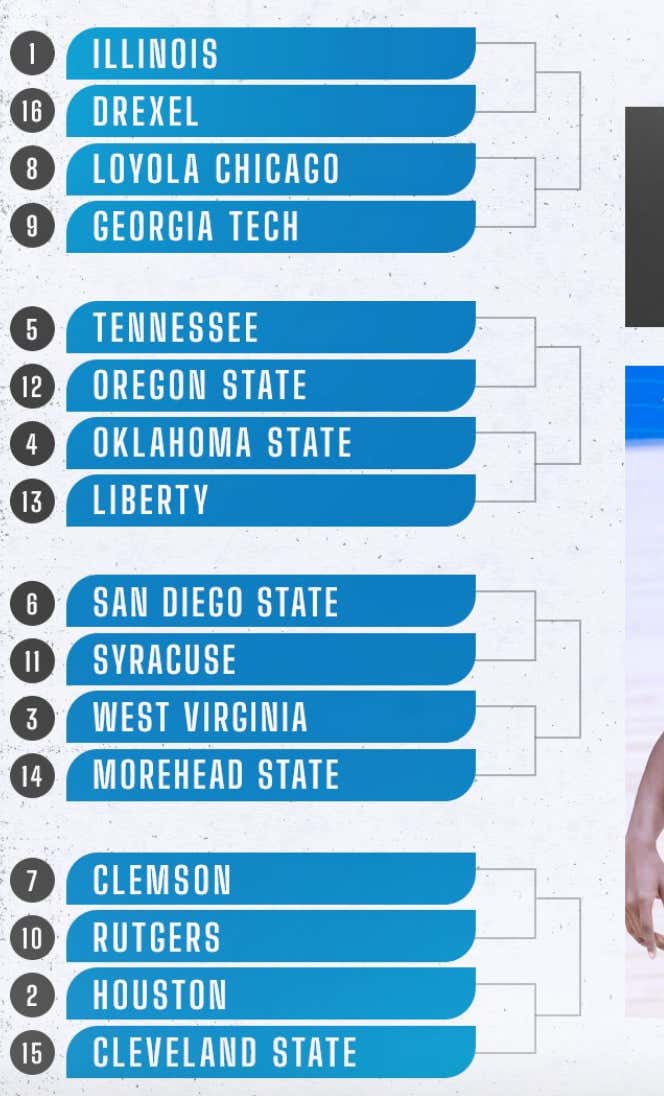 - I'm not saying I influenced the committee, but you can't tell me they don't look at my Twitter:

- I know people want to fall in love with Loyola as the mid-major that is good, but Georgia Tech is a horrendous matchup for them. Pastner matches up real well against Moser's x's and o's and GT's guards are going to give Loyola all sorts of trouble. That zone that GT plays can really eliminate Krutwig too.

- I said it before but I'll say it again, in no way should Oklahoma State be a 4 seed. They are at least a 3 seed and that's a gross seeding. I know Liberty is a decently tough matchup but Oklahoma State has too much talent not to make the Sweet 16 here. I don't trust Tennessee's offense one bit to bother the in the Round of 32.That said Cade vs Ayo and Underwood vs Oklahoma State is must-watch TV.

- San Diego State has a legit chance to make a run to the Elite Eight here. They are a top-20 team, their defense is phenomenal and can really bother WVU. Houston has laid too many eggs for me to trust them as the 2 getting there and Clemson/Rutgers is yawn.

- This feels like a bracket where we could get awesome games up top and anarchy down low. Then again, that's sort of my feel on this tournament as a whole. I think we see mayhem early and chalk in the second weekend. 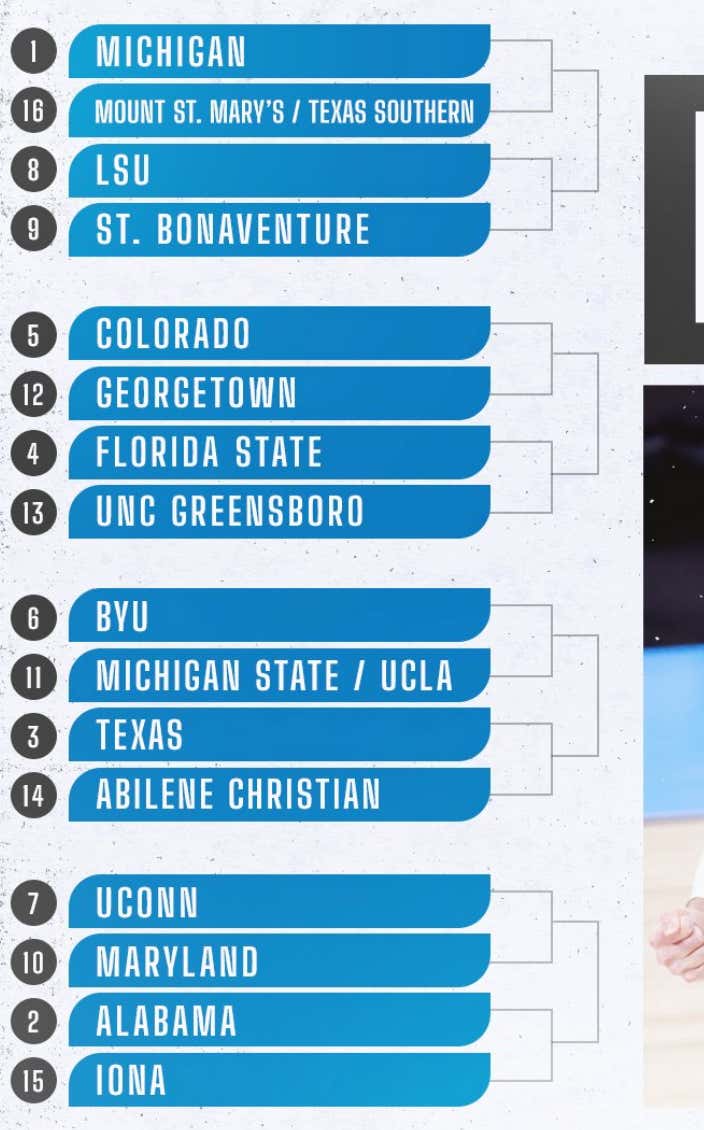 - LSU as an 8? What the fuck are we doing here? Pretty sure everyone thought they'd be like a 6 seed. That's BRUTAL for Michigan, especially if Livers can't go. LSU has a ton of size to match up with Michigan. They can shoot the shit out of the ball and they get up and down the court. I know their defense is an issue, but that's the most brutal 8/9 draw for a 1 seed.

- This is an absolutely loaded region. Alabama as the top 2, Texas as a 3 and FSU as a 4 is completely brutal. This is the one region where it feels like 4-5 teams can make a Final Four run. I want that though. You should be rewarded if you're the No. 1 overall seed vs the No. 4 overall seed.

- Sign me up for UConn vs Alabama and that's another sneaky upset watch. UConn is an awesome 3pt defensive team and that's step 1 to beating Alabama. They also have James Bouknight who is a legit star.

- Michigan State vs UCLA in the First Four is awesome. Big name programs and getting the right to play BYU? That would be another popular upset pick.

- UNC-Greensboro is a real fun mid-major but got the worst draw possible for them. FSU should roll against a team that would be a popular upset pick, especially with lead guard Isaiah Miller.

- This is by far the most entertaining region up and down.

We’ll have picks and breakdowns and everything good as the week gets going. It’s going to be a fun month, folks. Looking forward to all the interactions on Twitter and yelling about our favorite teams.