Daily Mail — As his son continues to be embroiled in shocking claims of cannibalism, the apparent sins of Armie Hammer's father have been laid bare in a bombshell new report.

Michael Hammer has a past just as scandalous as it emerged he took almost the entire family fortune, was embroiled in New York City's biggest art fraud and allegedly almost came to blows with his son during the doomed Cayman Islands lockdown last year that led to Armie's unraveling.

Insiders also claim the 65-year-old, who they say 'has the mindset of a teenage boy', keeps a 'sex throne' or as he allegedly calls it the 'naughty chair' in the Armand Hammer Foundation headquarters, which features the family coat of arms and a cage underneath.

As they say, the apple doesn't fall far from the tree — according to new reporting by Vanity Fair, the Armie Hammer familly is no exception.  Honestly the idiom may have been invented specifically FOR the Hammer family, assuming their ancestors are even a quarter of the sex-crazed cannibalistic psychos these two allegedly are.

Not that you forgot, but a quick refresher of the Armie Hammer saga can be found here. The TL;DR is that he's 100% cannibal. He needs blood, craves it.  His words not mine. And that's just the very bare bones of his DMs that leaked, which are, all things considered the worst series of DMs that someone could have leaked, short of...I don't know actually, I was going to say "literally providing evidence they committed a horrible crime," then I remembered it's illegal to kill and eat someone.

Now, as Armie is being dad-of-the-year somewhere with his kids keeping a low profile and licking his wounds, Vanity Fair comes skipping along and blows his fucking old man up too. A complete laundry list of "secrets you'd love to stay secrets" for Michael Hammer, the alleged family-fortune-stealin', art-thievin', son-of-a-murderer-and-sexual-abuser and father-of-a-kink dom cannibal with his 7 foot tall sex chair.

And to tell you the truth, the Naughty Chair is like the 14th most interesting tidbit on the list for Michael. From what I'm reading, he didn't even eat anybody on it — seems to be just standard-usage of a sex throne, which is by no means a crime at least in New York. (This is assuming the woman in question survived the night): 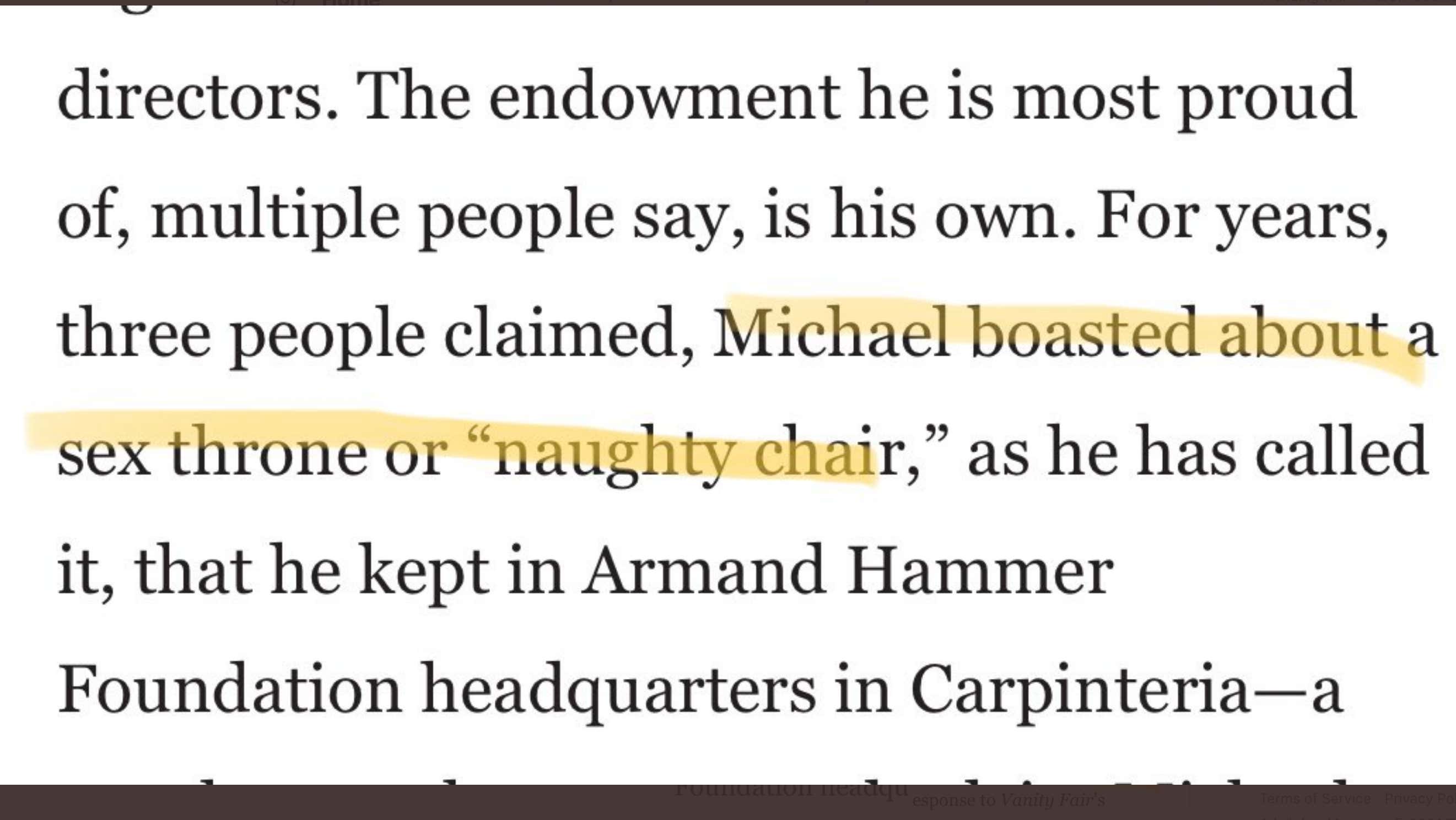 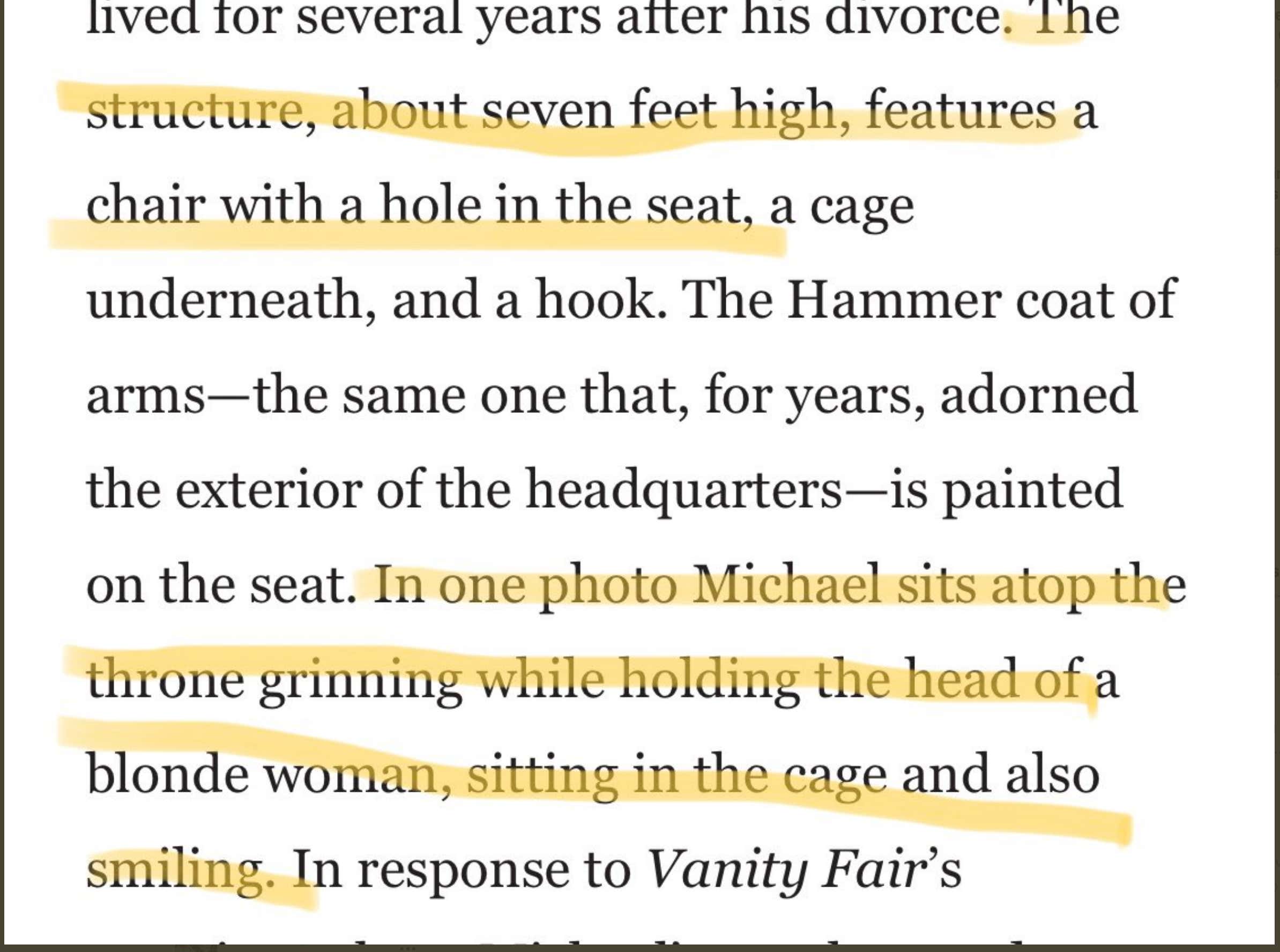 The other things though, those are things you could call slight reputation-harmers however…here's the summary from just the artcle sub-header, before even reaching the article section:

I recommend clicking through the link, there's honestly dozens of gems in there I didn't even have time to mention.

Oh, because there's always two sides to every story, I'll mention that Counsel for Mr. Hammer told Vanity Fair the claims about his sex throne, drug and alcohol use, finances, and history with women are 'absurd.' Haven't you ever heard of unsolicited gag gifts? You know from like, Spencers in the mall?

'These questions, which ask about unsolicited gag gifts sent by friends, conduct that sounds pretty typical of recently-divorced people, and entirely legal financial transactions that were properly accounted for, are absurd,' said the counsel Clare.

That settles that. Lawyers for crazy old rich white guys are notorious for telling the truth about their clients so I'd say we can put these charges to bed…unlike the women Armie dates, who get their beating hearts eaten and pulsating blood funneled instead.

Honestly, there are some legit crimes on there, but I still don't think anything tops taking the $180 million family fortune and leaving his sister with nothing but bus fare to her shift at Home Depot selling drawer knobs and toolshed parts. 180 million dollars, all of it — the entire 180. Do you know what kind of an unbelievable savage you have to be to take $180 million and leave your sister with $0? Not $1 million. Not a 179 to 1 split. Not even 50 bucks, literally just 0 dollars.

The kind of savage who raises a cannibal I guess. These Hammer men…they're some real mother fuckers.

Anyone out there feeling unlucky in love lately, on a bit of a pandemic-induced cold streak — I recommend taking a quick look through the Armie DMs, see if any inspiration strikes you. This one in particular has stayed fresh in my mind: 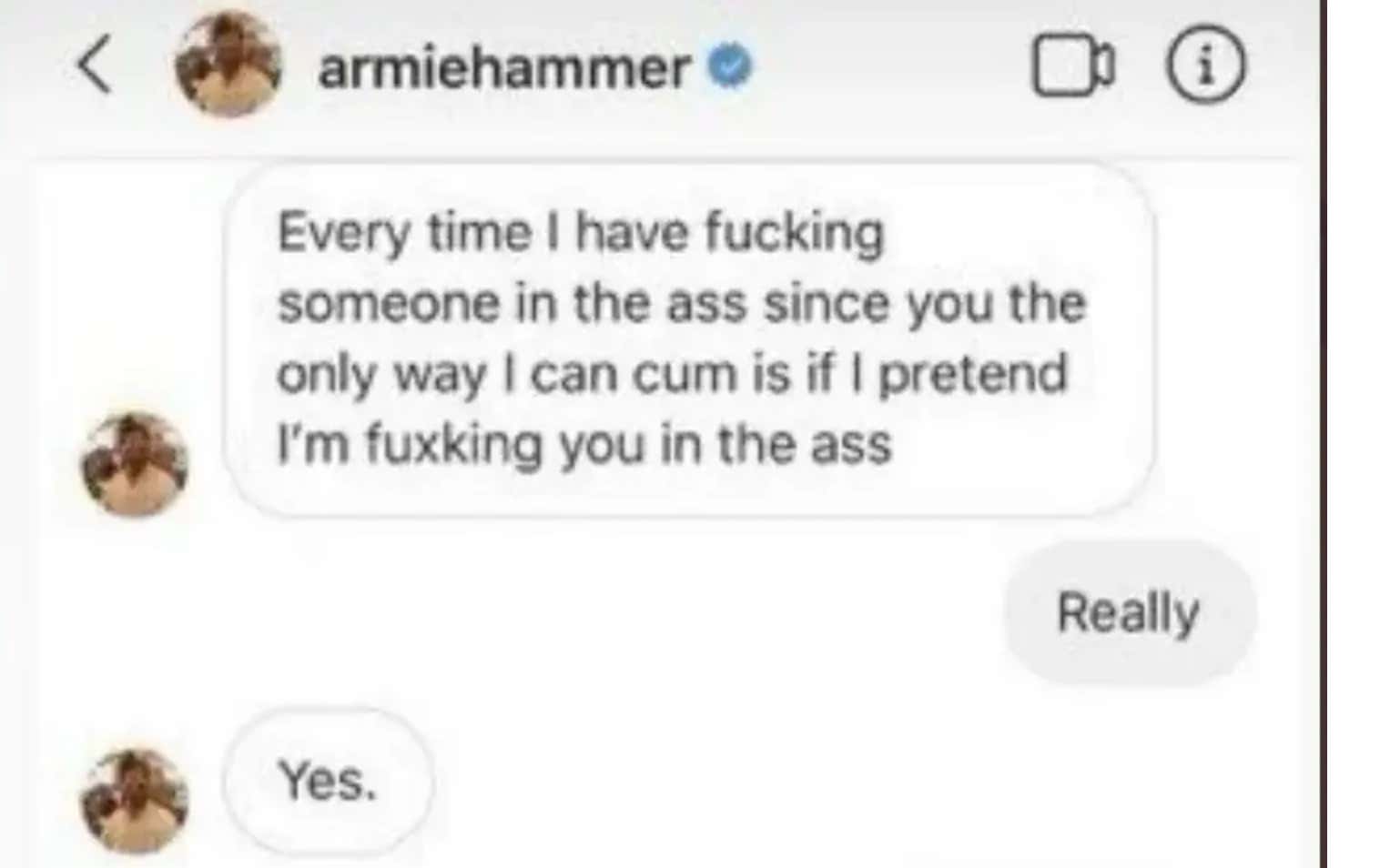 And whatever you say about Armie Hammer…don't ever say he isn't a gentleman to the women he wants to consume.

The Hammer family is the Michael Phelps of perverted criminal activity.