Everything is a fucking gimmick nowadays... Particularly with food.

And some of them fail miserably… Like the Feet-Loaf Meat-Loaf I make every Halloween. 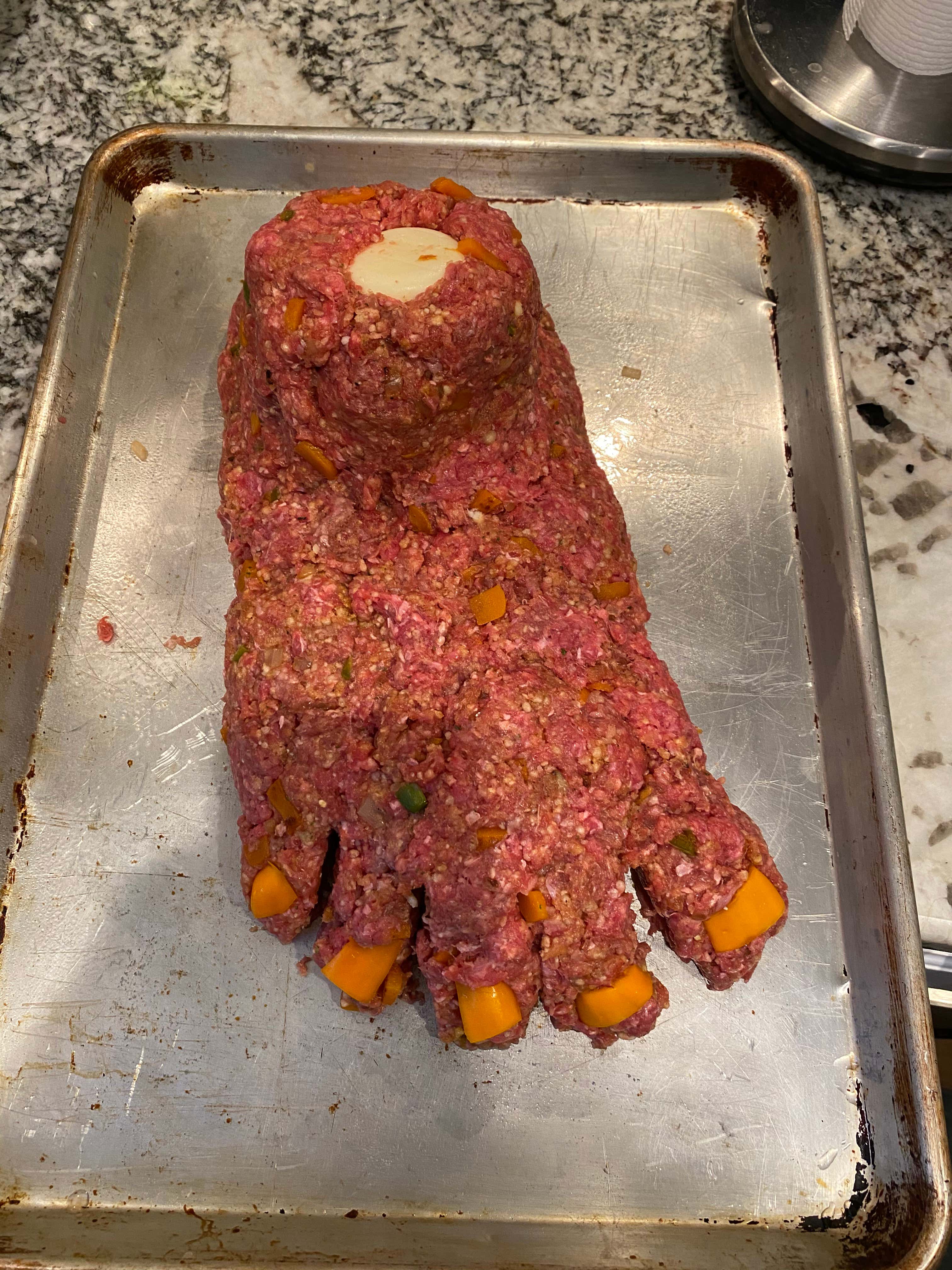 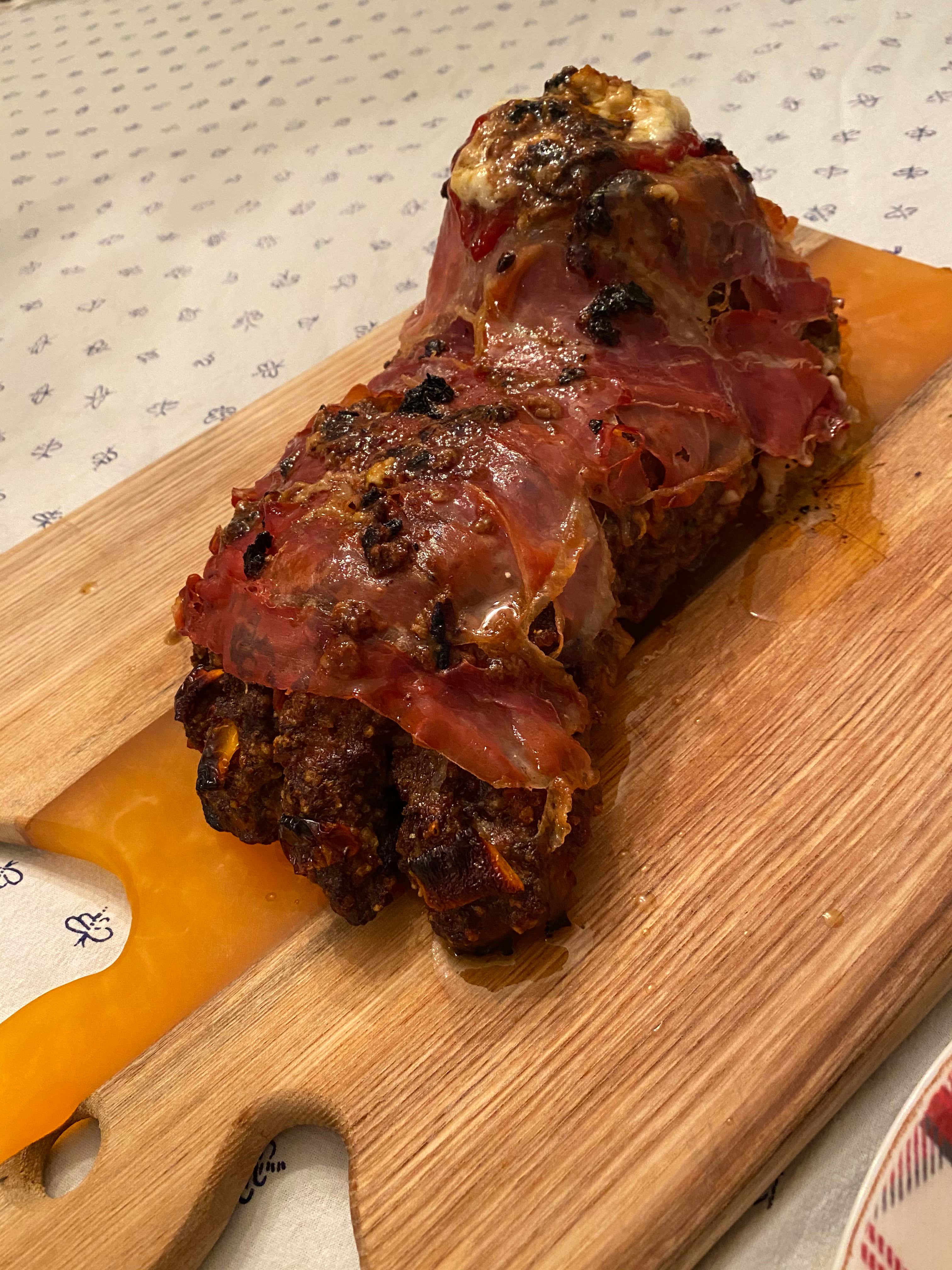 Still, I keep trying them, and one of the characteristics of a food gimmick that tends to excite me more than others is when the dish mixes sweet with savory.

I am sure some European colonist in the 1600s was given an earful of shit when he first proposed serving fried chicken AND waffles… Perhaps he was burned at the stake for some sort of gastronomical blasphemy.  But 400 short years later, I am standing in line outside Sylvia's in Harlem… Waiting to get my shot at that syrup and salt bomb of a meal.

Similarly, when my good friend (and future NFL Hall Of Famer) Nick Mangold asked me to lunch at The Committed Pig in Morristown, NJ, I jumped at the chance because they serve very good burgers, including the gimmicky sweet-and-savory "BURGERNUT" 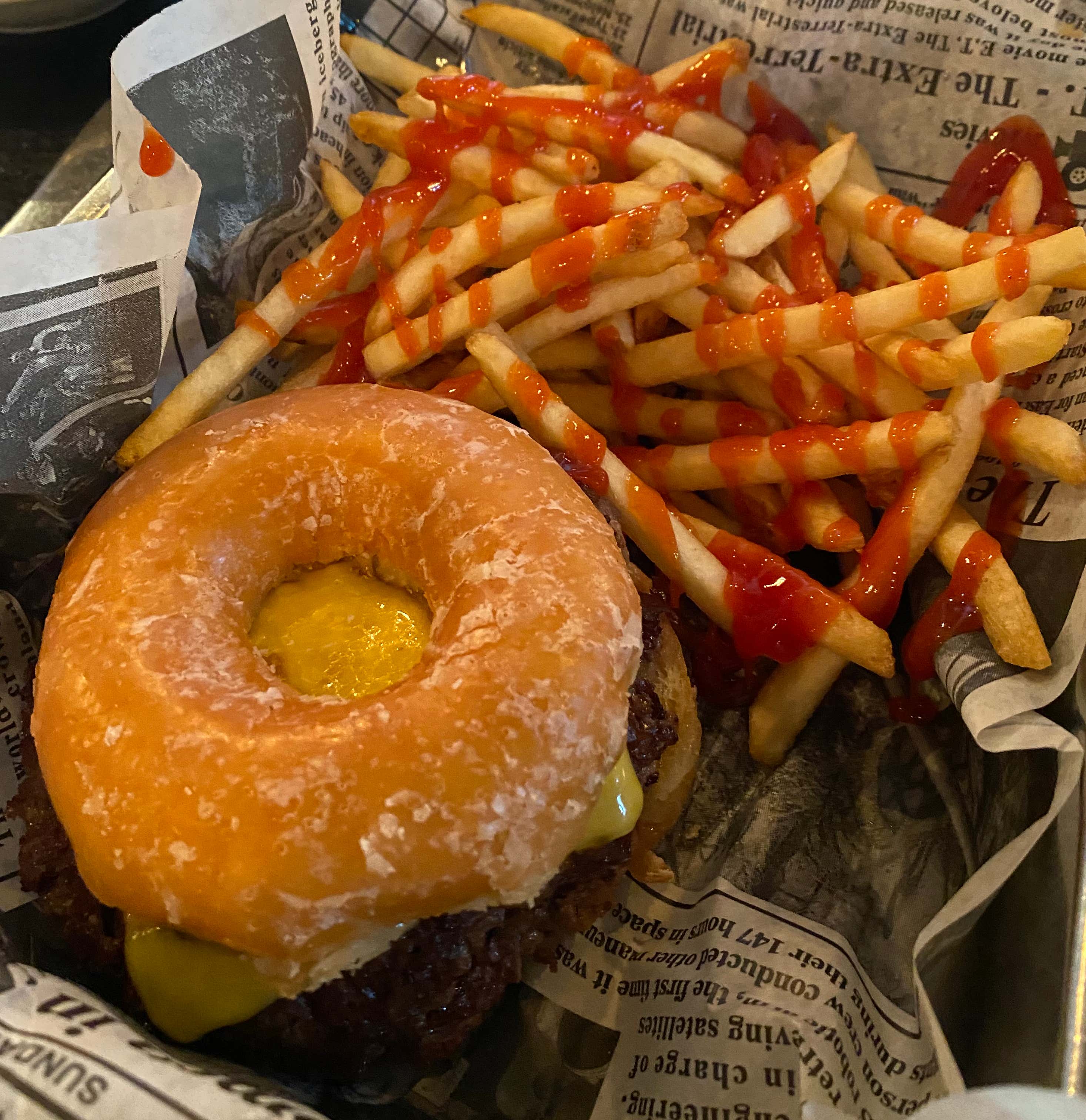 I know TCP is not the first place to put these ingredients together… I first heard of a similar sandwich back in maybe 2007 when a minor league team called The Gateway Grizzlies in Sauget, Illinois (A state that is now home to the latest Barstool Sports Book!) introduced it.  And, even though some groups balked at the calorie count, sales of the burger made it a rousing success.

As you can see, the Grizzlies' version is slightly different than the one I had this week inasmuch as theirs has only one cheeseburger patty with the addition of bacon nestled into one split Krispy Kreme glazed donut whose cut-side is toasted on the grill.

And various other forms of this concoction have popped up in the last 15 years… The combo is probably best known as The Luther, named after the perenially tubby R&B legend Luther Vandross who passed away in 2005 after a severe stroke that was brought on by… Guess what?

Because when it came to sweets, Luther thought it was Never Too Much…

And now, The Luther is a darling amongst state fair food vendors… The Alabama, Arizona, Indiana, Louisiana, Mississippi, North Carolina, Oklahoma, South Carolina, and Wisconsin State Fairs have all served up their own version of The Luther Burger.

But back to my version… On the surface, the Burgernut from The Committed Pig may seem odd, but the dish was surprisingly good.

The burgers’ saltiness easily played off the doughnut’s sticky sweetness, and I devoured the whole fucking thing before it had any chance to degrade into an overly sloppy mess.

It is certainly not something I would eat often, but, as I mentioned above, it is a food gimmick that is worthwhile trying.

Plus, The Committed Pig itself is a wonderful burger joint no matter what combo you happen to order.

I spoke to the owner, Jerry, and he told me that his place was the first NJ burger restaurant to be serviced by Pat LaFrieda… Pat LaFrieda Meat Purveyors is a third-generation meat wholesaler that specializes in dry-aged steaks and artisanal burger patties.

Their facilities include two dry-aging rooms that house 5,000–6,000 primal cuts of meat (the equivalent of over 80,000 steaks).  They also own multiple grinders that produce 100,000 burgers every fucking night.

That's a LOT of meat. 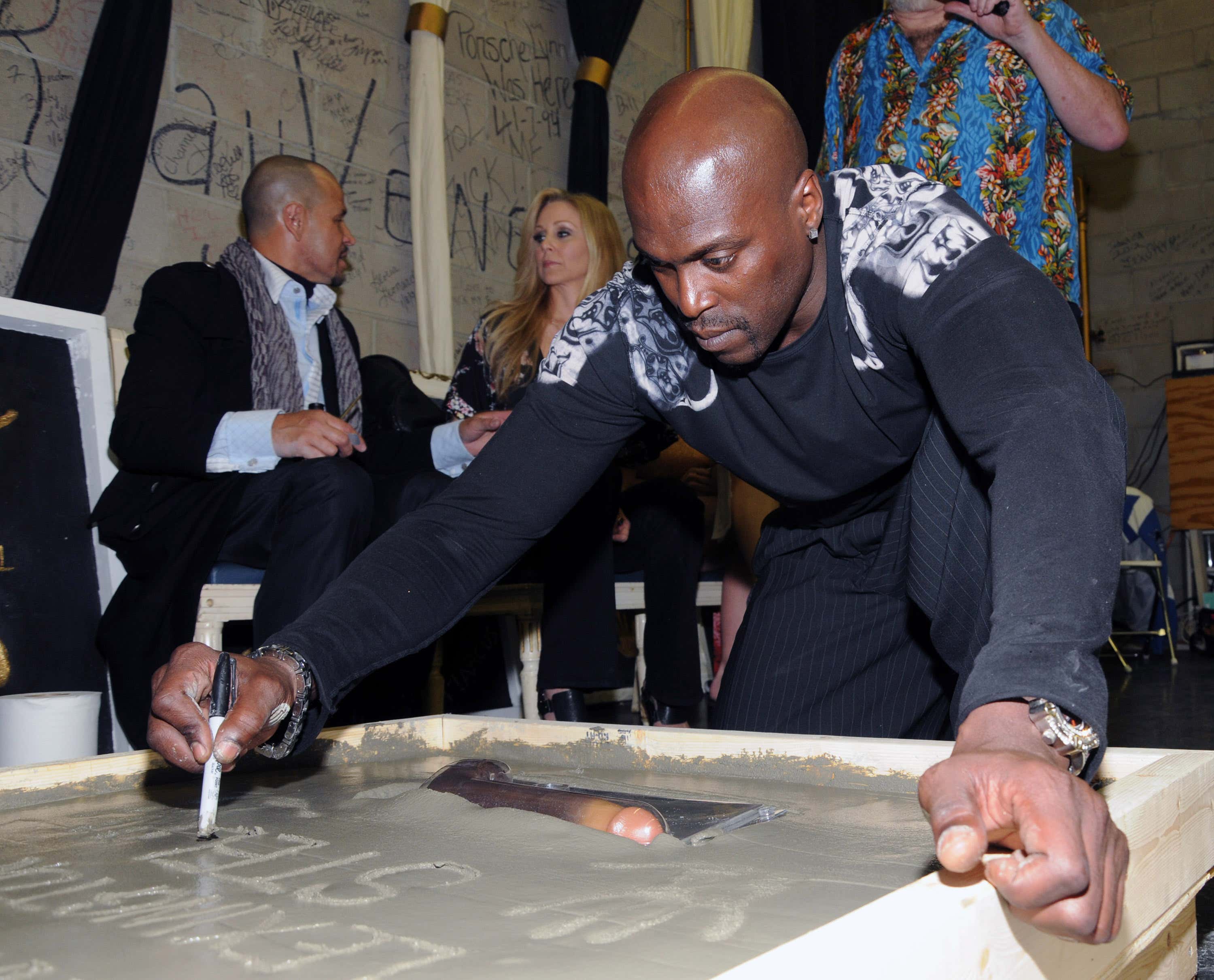 And because the company operates 24 hours a day, six days a week, Pat LaFrieda Jr. claims that his family's biz is able to process meat that can feed over 300,000 people a day.

They also cater to about 9,000 restaurants, most of which are located in New York City, but (as I said before) The Committed Pig was the first NJ burger joint to get its own proprietary blend of ground beef from LaFrieda for its burgers starting back in 2009.

Real quick, I asked Jerry what the blend was, and he refused to give up the secret BUT did say his burgers contain considerably LESS short-rib in their mix compared to other places that brag about their meat being almost equal parts short-rib, brisket, and chuck.  The Committed Pig's blend has no chuck and very little short-rib, so the bulk of your burger is a ground mix of both flank and brisket plus however much fat to get it to 80/20.

Jerry's belief is that short-rib adds a depth of flavor more in-tune with a thick steakhouse-style burger, while his thinner and less complex patties that are cooked on a flattop don't need anything more than the delicious brisket and flank has to offer… And he is absolutely right because the quality of his burger trumps that of any I have had at fast-food darlings like Shake Shack or In-N-Out.

Man… I am going down a rabbit hole on ground beef blends… Apologies… This shit fascinates me.

Outside of the donut burger, I tried the wings which were very good and smothered in a DELICIOUS barbecue sauce called "74 BBQ"… A sauce that BY TOTAL COINCIDENCE was developed by my handsome lunch-date, Nick Mangold.

And I also tried one other sandwich there…  THE RUTGERS… Which was Taylor Ham, chicken fingers, mozzarella sticks, and American cheese on a toasted bun… 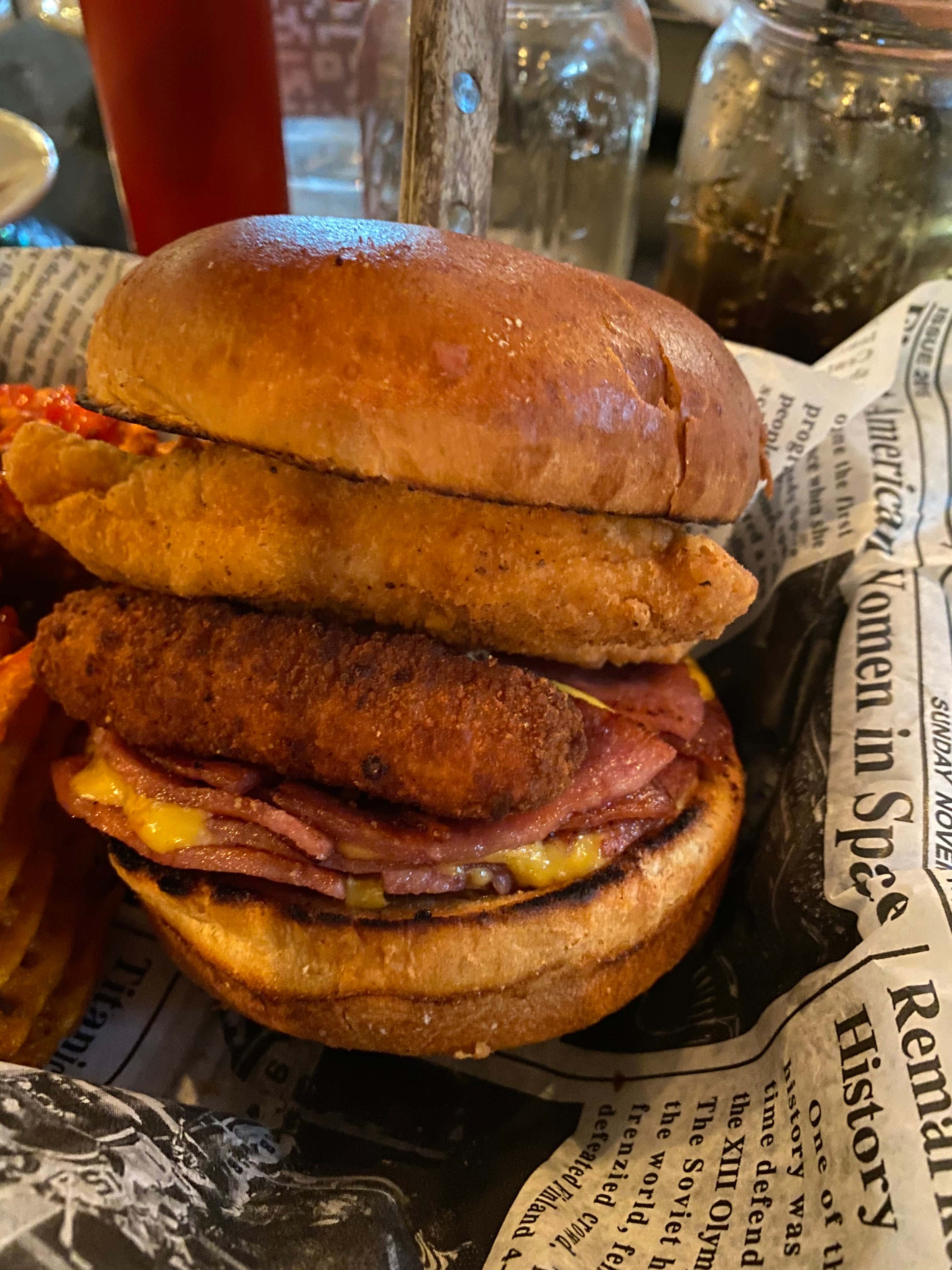 I actually sent mine back to the kitchen, but only so they could add a sunnyside-up egg to the top and then run it back to my outstretched arms along with some hot sauce. 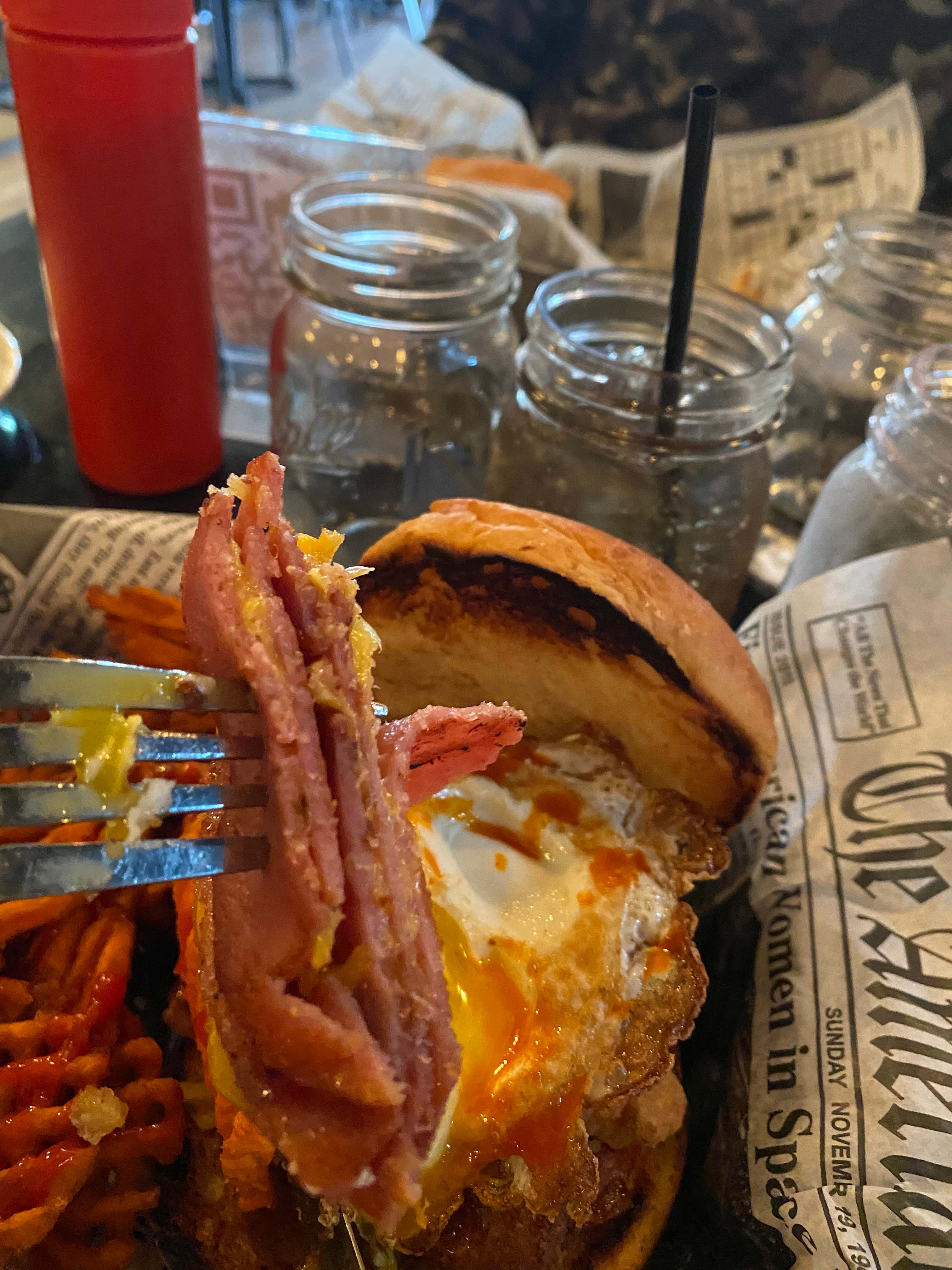 If the BURGERNUT doesn't kill you, rest assured, THE RUTGERS will, but since I live my life a quarter-mile at a time, I had zero regrets on either.

BOTTOM LINE- If you are in the mood for something a little different, and you are anywhere near one of Committed Pigs' three locations, I highly recommend giving their BURGERNUT a try… If you don't want to commit to a whole burger yourself, then I suggest you at least get involved and order one to share between you and the escort you just hired for the evening… Who, in my case, was future Hall of Famer, Nick Mangold.

Grubhouse on Clubhouse- We are going to have our 4th installment of Grubhouse with myself, Clem, and Coach Duggs on the CLUBHOUSE app today at 2 PM.