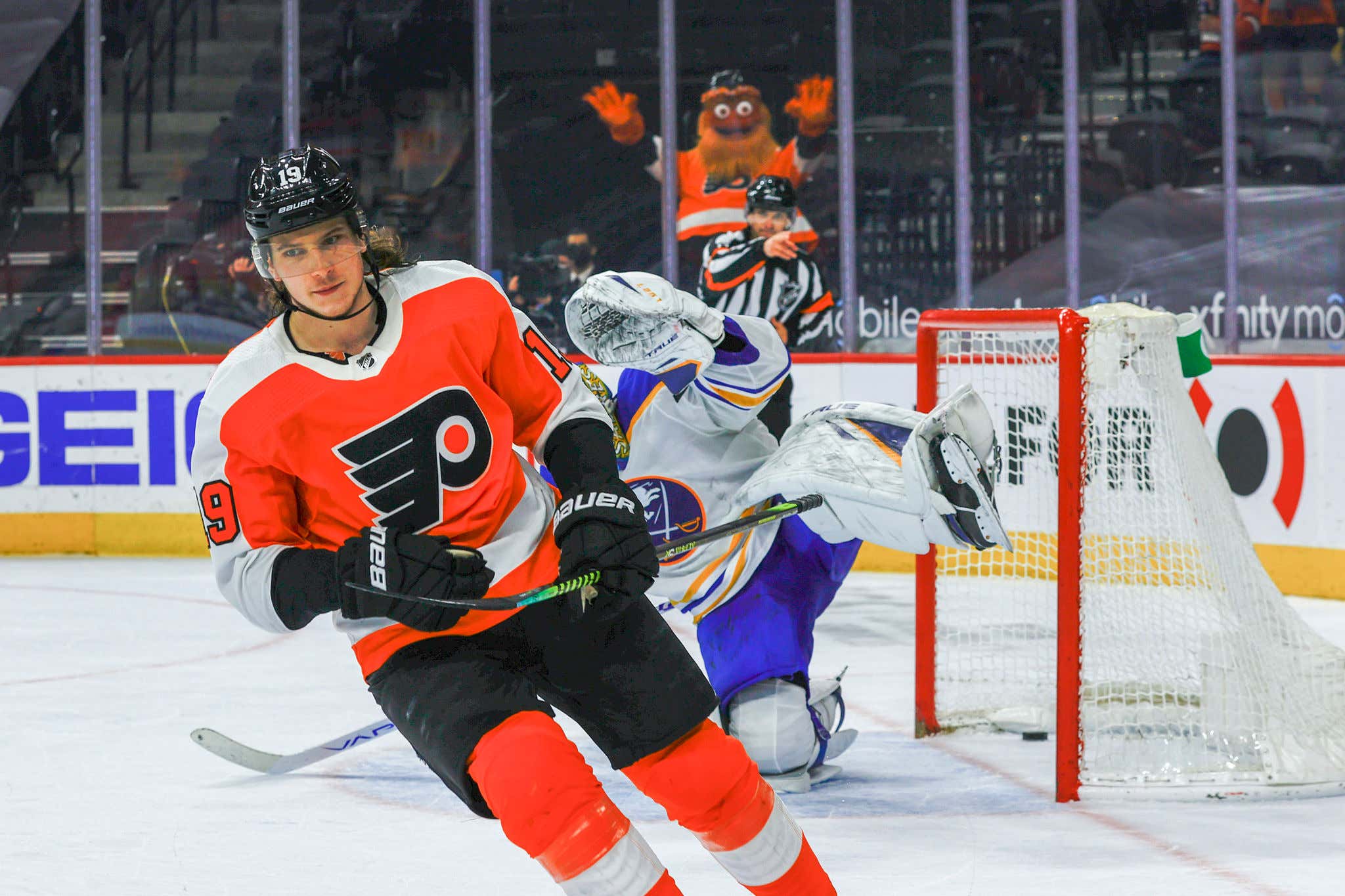 The Philadelphia Flyers managed to salvage 2 points against the Buffalo Sabres last night after winning in a shootout. It was not a victory worth celebrating. It was nothing to be proud of. The Sabres are the worst team in hockey and they are without their best player. The fact that the Flyers had to climb back from multiple 2-goal deficits after already dropping the last two games in regulation is nauseating. In fact, the only real positive to come out of last night was this photo of Patty burying the game winner in the shootout.

Things right now with this team are bad. The team is constantly making life more difficult for themselves with bad starts in the 1st period. Carter Hart's confidence is at an all-time low. Brian Elliott looks perfectly fine in net but you can see that he's already getting a little shaky with how much he's had to play over the past couple weeks with Carter being so sketchy. Ivan Provorov looks like he's being held together by duct tape and staples. The defensive zone coverage from all 6 guys on the ice at all times is putrid. And it just seems like shit needs to smashing against the fan for the Flyers big guns like Giroux, Jake and Hayes to really come alive. They've been playing some terrible hockey lately and they are just incredibly lucky they've had 3 games against the Sabres to cancel most of it out.

The quote that keeps sticking out to me is this one from the legend himself, Herb Brooks.

The Flyers do not have enough talent to win on talent alone. Yet the way they start games leads me to believe they think they're a lot more talented than they actually are. It leads me to believe that this team thinks they can just roll out there against the Buffalo Sabres and not have Sam Reinhart put away 2 goals in the 1st period. That Travis Konecny can just stand there in the slot doing absolutely not a goddamn thing and magically Carter Hart will come up with this save.

I mean what the fuck, TK? C'mon. The boys treated that 1st period like it was some throwaway game in Rochester. And if it weren't for the fact that the Sabres are truly a god awful dogshit hockey team, the Flyers would have pissed those 2 points away in those first 20 minutes. They were able to eventually even things up and win in a shootout. But still.

So what has to change? Because clearly it's not working right now.

You could fire some guys, sure. I honestly don't know what it is that Mike Yeo or Michel Therrien do right now. I bet they don't even know what they do either. But is "hey you guys suck so hard that you just got Yeo fired" really a message that is going to get across to this team? Maybe, maybe not. You could obviously make a trade. But as it turns out, making a trade isn't as simple in real life as it is in the video games. Chuck Fletcher can't just put the passcode in his iPhone and a trade magically appears. Another team has to be willing to deal someone who could help out the Flyers and then there are all the logistics of money and prospects and draft picks to hammer out.

Once you lay all the options out on the table, I truly think the best course of action to take right now is to stick with Herbie. At least in the short term. I think if there's anyway to squeeze just a little more juice out of this dried up roster, the boys need to watch Miracle for every pregame. At the very least they need to play a compilation of the best Herb scenes in the locker room before the opening puck drop.

You don't think that'll get the squad fired up? You don't think that'll get the boyz to be buzzing at an optimum level for the opening puck drop? Because if Herb can't get you going, then you need to check to see if you still have a pulse. And please do not get this twisted. I'm not saying that I need AV to turn into some massive hard ass like Herb Brooks was and start to lay into these guys between periods. I need Kurt Russell portraying Herb Brooks to do that job for him. Buncha candy asses.

P.S. - Sick finish from NolPat though. Can't knock that release at all.