Source - UTLA teachers have been warned not to post vacation pictures on social media as the union continues to seek a safe return to in-person instruction amid the coronavirus pandemic, according to a report Monday.

The teachers were urged to keep spring break pictures off social media because it could hurt the union's argument that it's currently unsafe to return to the classroom, according to a screenshot that appeared to be from a roughly 5,700 member Facebook group titled, "UTLA FB GROUP- Members Only."

"Friendly reminder: If you are planning any trips for Spring Break, please keep that off of Social Media. It is hard to argue that it is unsafe for in-person instruction, if parents and the public see vacation photos and international travel," a post from the group read, according to FOX 11 of Los Angeles reporter Bill Melugin. ...

The warning comes after UTLA members voted overwhelmingly to reject what the union called an "unsafe" return to the classroom unless certain demands are met, according to Los Angeles Teachers union President Cecily Myart-Cruz on Friday. 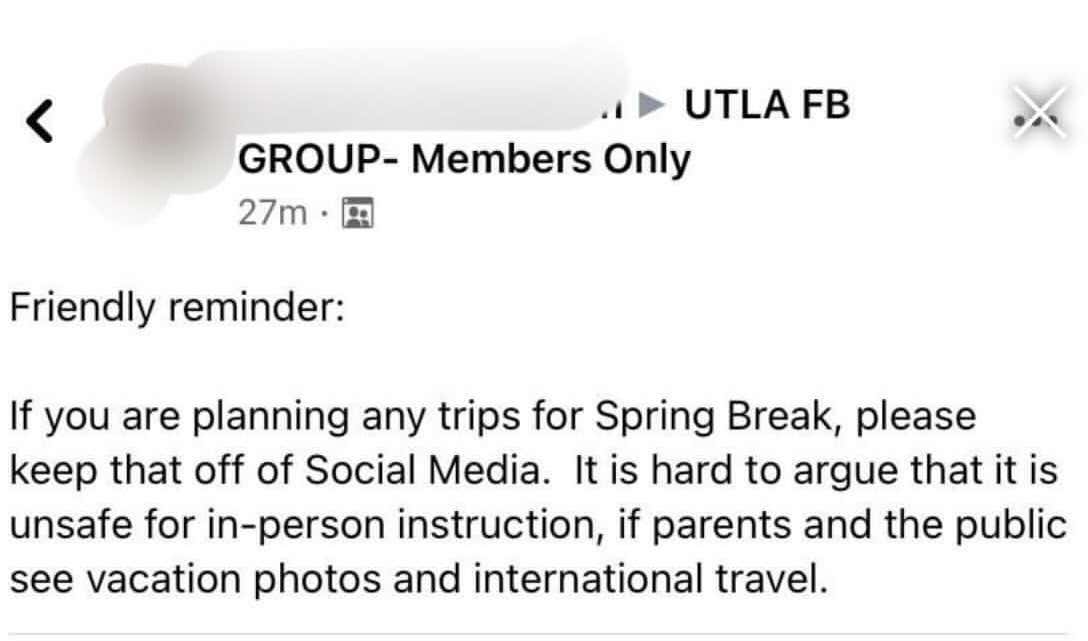 There are so many bad optics here it's hard to pin one down. It's a like a game of Bad Look Whack-a-Mole. Only around the 12th round where it speeds up and they're all popping up at once.

First, there's the fact that these schools haven't been open a day in over a year. While schools all over the country, even in the draconian hellscape of Maskachusetts where I live have been back in some capacity since September and are weeks away from full time in-school opening. Then there's the fact that these union leaders, rank & file members and the administrators haven't missed a paycheck in the middle of an economic collapse. Meanwhile the parents that are stuck at home overseeing their kids' education have been forced to miss work or lose their jobs altogether. While still paying the same property taxes that pay for their kids education, despite the fact the schools have been padlocked for the last 52 weeks.

But all those pale in comparison to the biggest, baddest look in all of this. That the union isn't worried about finding the best and fastest way to get back on the job. Nor are they telling their membership the best way to get that done is to stay home over Spring Break like the literally tens of millions of messages we've been carpet bombed with since last March keep reminding us. No, they're saying if you go away, great. Just keep that shit to yourself.

Have a blast in Cabo with the kids, everybody! If it's just you and your spouse, head on down to Sandals Jamaica like Michael Scott and Jan Levinson! Got get your hair did in cornrows, even though that's so basic! We won't judge, LOL! Just remember, it's our secret! It's not safe to be in front of a classroom of 12 year olds. But no one is telling you not to head to DisneyWorld or Nashville! Just keep the phone in your pocket! What these parents who are unemployed and stuck at home don't know, won't hurt them, amirite?

Look, I'm all about supporting all teachers, not just the one I'm married to. I don't blame the membership in this as much as the leadership. They've filled these people with so much irrational fear and panic and told them never to go back full time if they can help it. Even though the supermarkets and chain stores and home improvement places have been open nonstop throughout. It's ridiculous that teachers haven't been high up on the vaccine priority list. Without question. Again, in my state they were put on the list behind smokers and people with obesity. I'm not making that up. But still, this is an outrage.

I've spent the last calendar year not pretending to be an epidemiologist, and I'm not going to start now. But what I am is someone with a very low tolerance for other people's bullshit and a highly sensitive bullshit detection system. And these people who aren't concerned about reopening as much as they are about how it'll look if parents see a picture of their kids' teacher sucking back Mai Tais in some beach bar while insisting the high schools are all death camps. When the people in positions of power care about optics over good policy, science, and doing what's best for the families they're supposed to be serving, we truly are broken beyond repair.