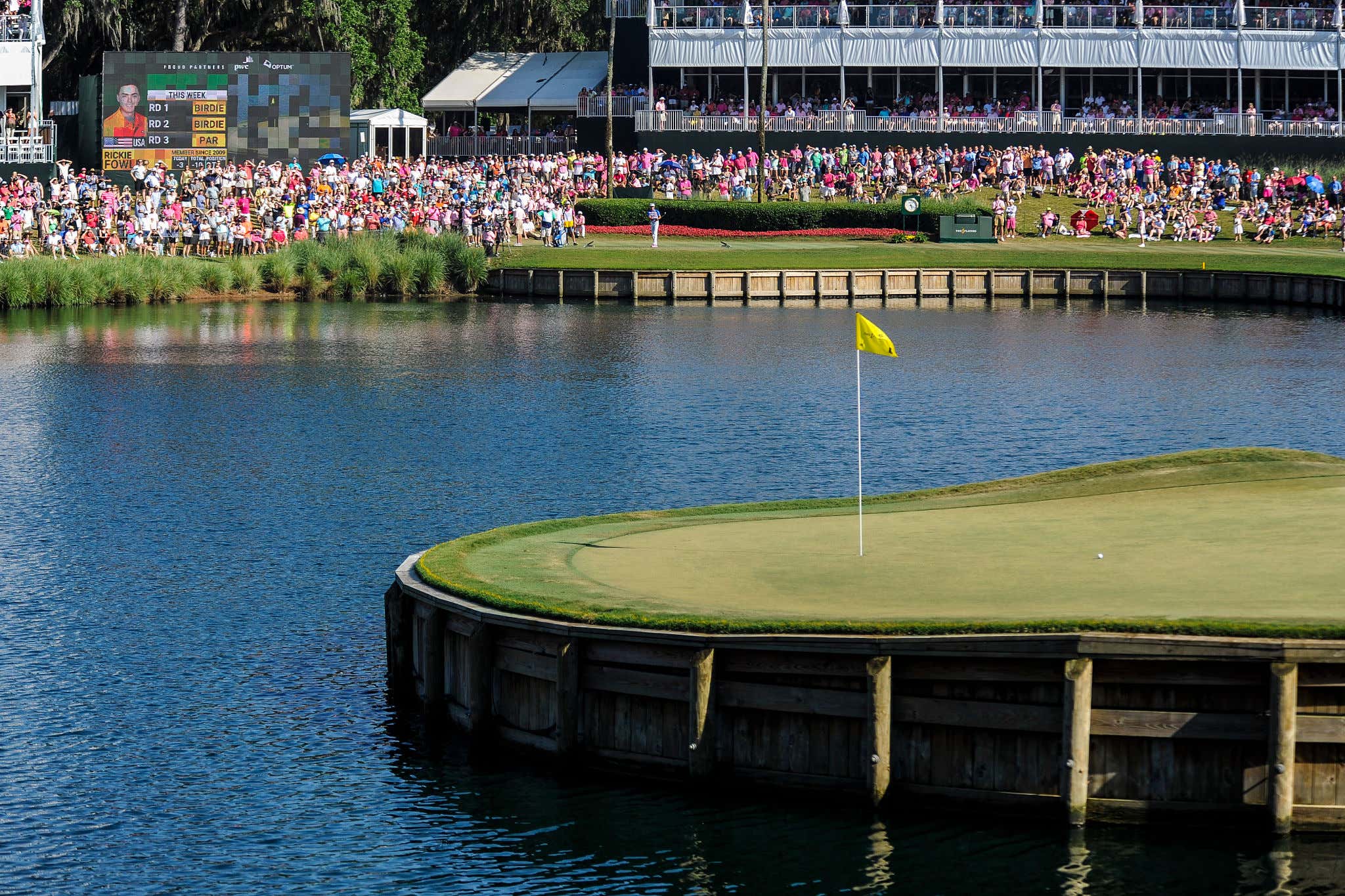 Ah yes. THE PLAYERS Championship at TPC Sawgrass. The one they call the 5th major.

It's one of golf's most iconic venues. Behind the eden that is Augusta National, this is the most well known annual stop on the PGA Tour. It's their premier event, as the Tour's main headquarters reside right here in Ponta Vedra Beach. It's also the single event (East Lake notwithstanding) where the Tour gives out the most coin - a total purse of $15 million is up for grabs, including $2.7M to the winner. For comparison's sake, the Masters is only giving out $11.5 million. So yeah, this is a big one where you're sure to see a lot of hubbub about the guy late on Sunday who 3-jacks 18 and costs himself $400k.

You're also going to hear a TON this week about how THE PLAYERS was canceled after 1 round last year due to the Coronavirus and how it all went down. I won't be reading or watching any of that. It's depressing and we're on to 2021. Hideki Matsuyama was out to a hot start with an opening round 63 and got the short end of the stick and I'll leave it at that. Technically that leaves Rory McIlroy as your defending champion back in 2019. Leaderboards from both years: 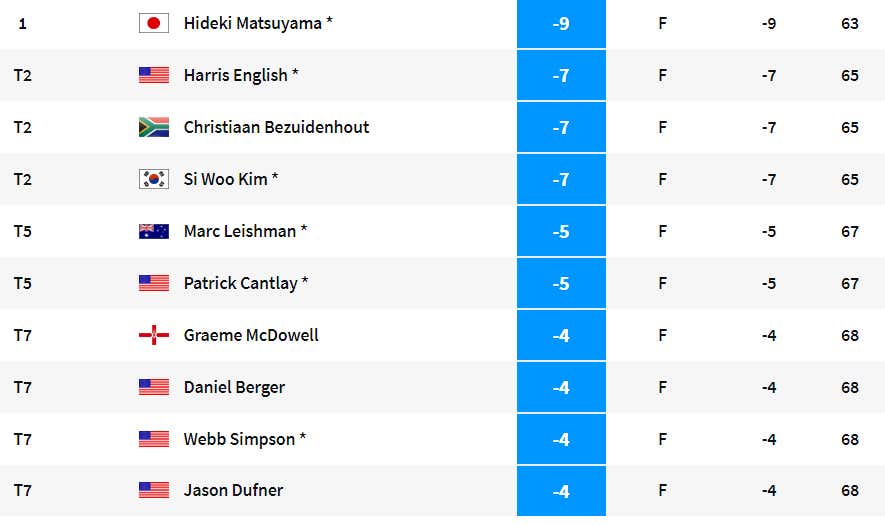 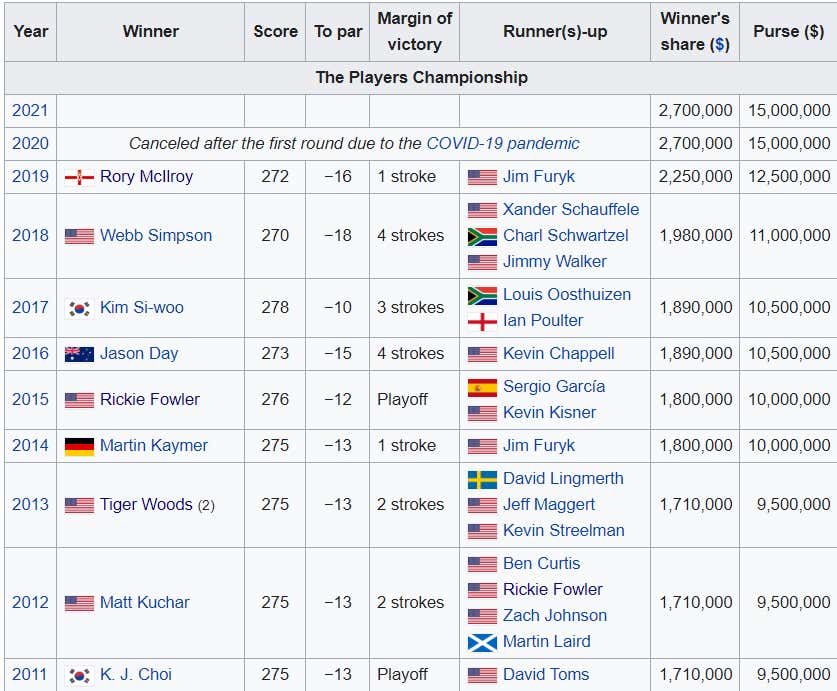 TPC Sawgrass is one of Pete Dye's greatest masterpieces and easily his most well known. Those who know the game well know a Pete Dye design immediately when they see one and this course exemplifies everything they tend to feature - long fairway bunkers, bulkhead-lined greens protected by water, and thoughtful holes of a variety of lengths. His objective was often to make his golf courses visually imposing and this course has that by the truckloads.

It measures 7,245 yards and is your traditional par 72 with par 36 on each side. It's not terribly long, but there are a good handful of holes where driver may not be the play off the tee. The 4th is probably the best example of that. All four par 5's are reachable in two, with the 583 yard par 5 9th being the most challenging with trees protecting the green short and left. The finishing 18th is a menace, one of the most intimidating final tee shots in all of golf that always makes for great drama.

What I find most interesting is that this course historically does not favor any one type of golfer. It's extraordinarily balanced. Bombers have won here, ball-strikers have won here, guys with incredible short games and hot putters have won here… there's hardly one area of expertise to target. Since THE PLAYERS moved to this course in 1982, no golfer has ever defended his title and no one has ever won here 3 times. Only Tiger, DLIII, Steve Elkington, Hal Sutton, and Freddie Couples have won here twice. Nobody should be walking on to the property this week thinking that they own the place. If you play good golf, you'll have a chance and if you don't, you won't. Crazy how simple that is right? 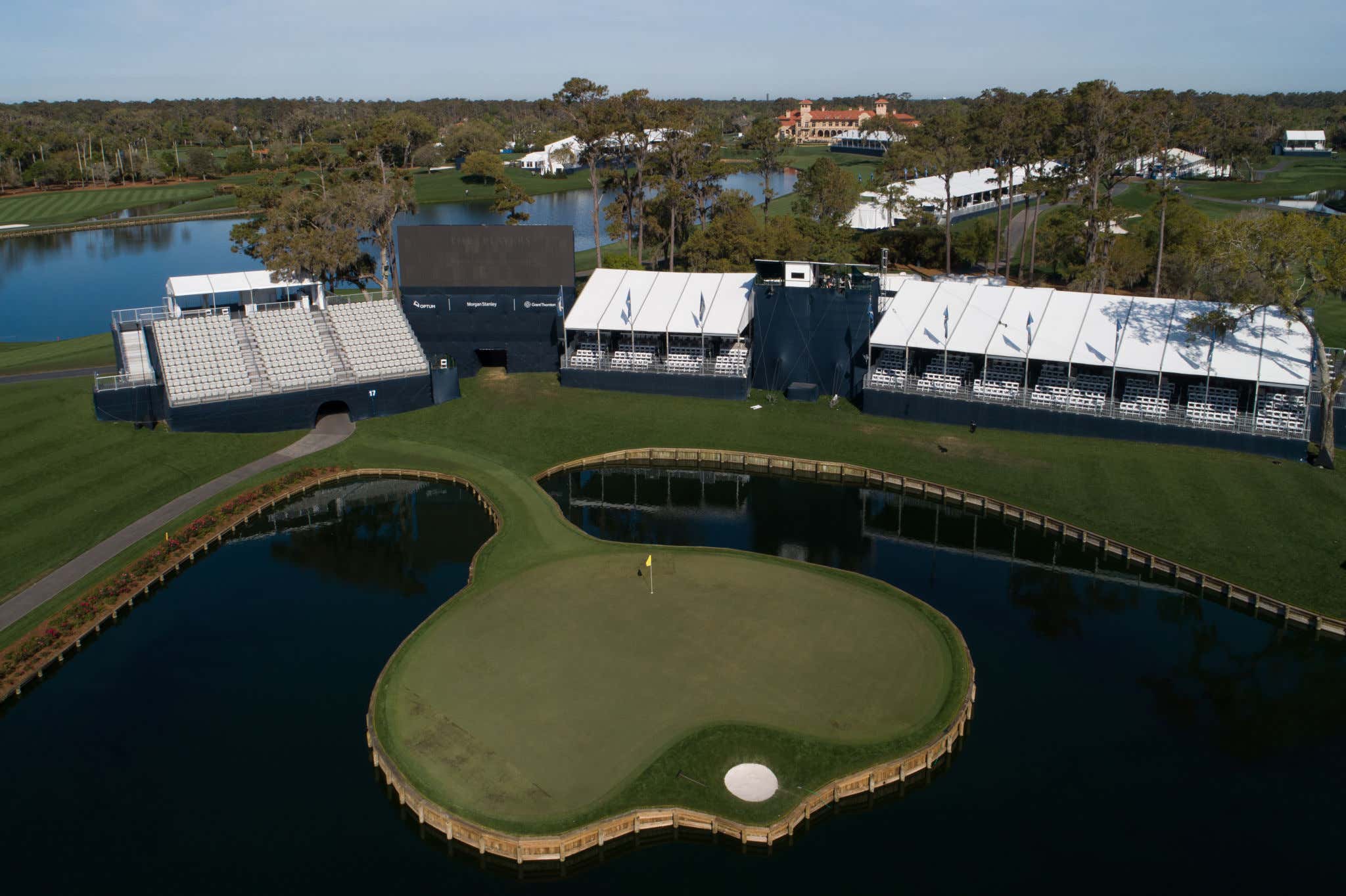 I mean, could it really be anything but the island green? It's one of golf's most iconic holes. I think its status as "one of a kind" is a little bit overblown (PGA West #17 says hi), but in terms of the stage that it's on and what's at stake, there might be nothing better in golf. The stadium atmosphere surrounding the lake delivers on TV and I'm fired up to say that I'll be there on Friday and Saturday.

So many great moments here over the years:

Rather cool weather forecasted for the week. Doesn't look as though any major rain is in the picture for now. Wind is there all 4 days, enough to be factor but probably not enough to turn the course sideways like Bay Hill this past weekend.

It's another Golf Channel and NBC weekend.

And all the tee times:

The PLAYERS is also touting a "see every shot" live feature that has the potential to change the way we watch golf forever.

Opens so many doors for gambling. There would be limitless action to wager and watch live. You might find me (responsibly) betting a Tom Hoge-Russell Henley hole matchup at 7:30 AM on a Thursday very soon. 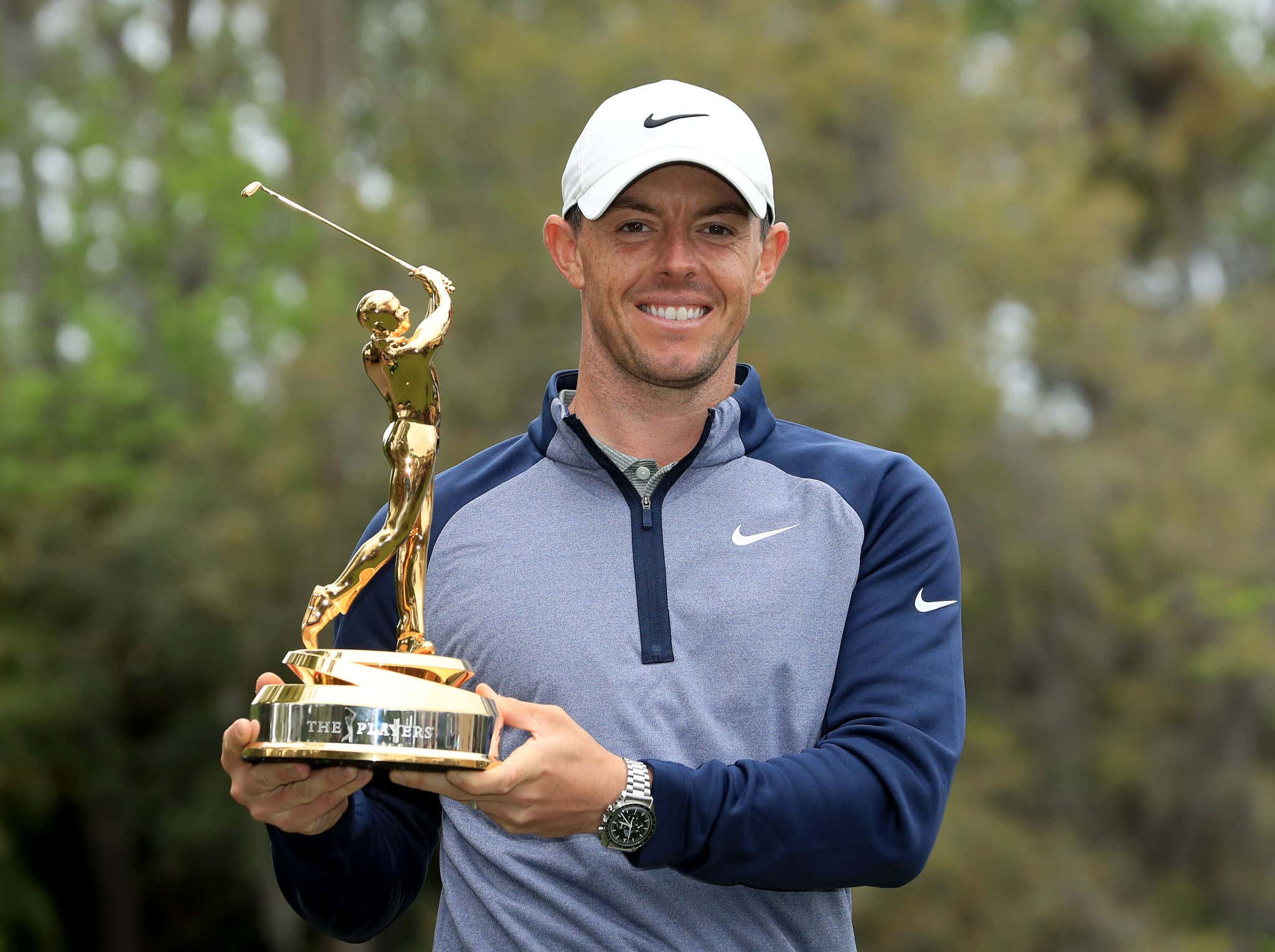 For a long time the prize here was Waterford crystal, which I guess was nice and shiny and all, but at the end of the day it's just a hunk of crystal.

Starting in 2019 with Rory's win, they unveiled a new trophy that takes after the logo for THE PLAYERS, which is an awesome and easily recognizable logo.

What I learned this week is that the face on the trophy is actually a composite grafting of the previous 38 champions? Pretty whack.

Where this trophy really brings it is the fact that the player is standing on an outline of the 17th island green. 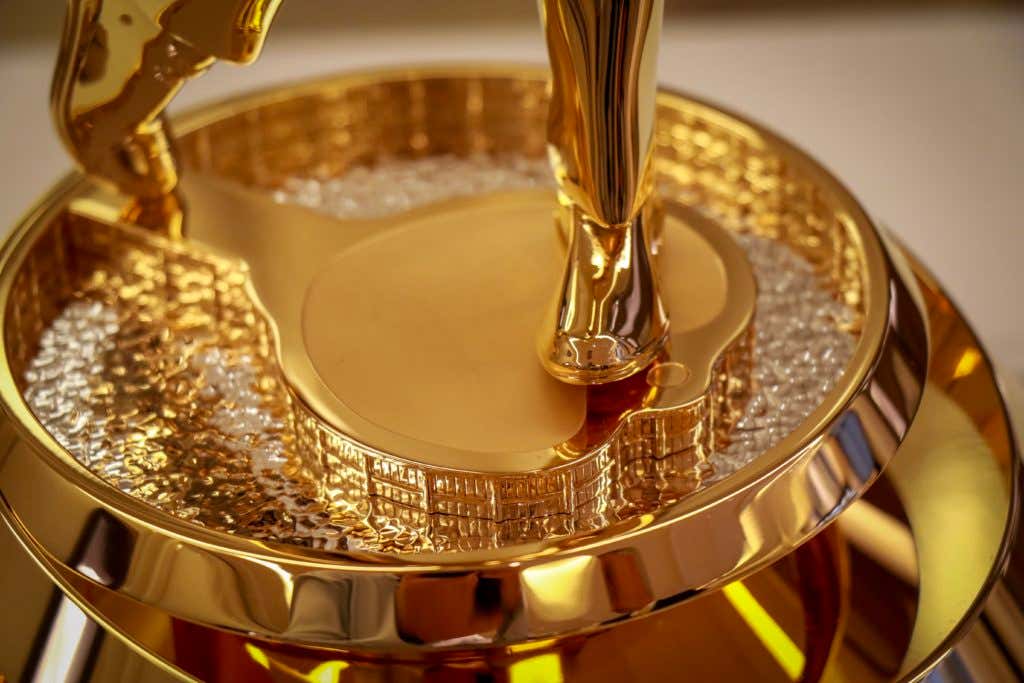 BAM. That's an instant 2 point boost to what was already a very solid trophy. I'm giving this trophy a 9.2/10. You won't want to swap it out for a hockey guy on top.

Wooooo baby do we have ourselves a tournament here. Deepest field in golf. 154 of the world's very best this week. Typically this event would only be 144, but they extended invites for an extra 10 who qualified for the 2020 PLAYERS to see that through. Good on them for that.

This is a really challenging tournament to forecast because of how deep it is and what I said earlier - this course does not tend to favor any one style of golfer. There's not a ton of patterns of past success to key in on, so you're probably going to want to emphasize recent form. If I had to dial in one metric, it'd be shots gained: approach. The greens here are smaller than most courses on Tour and many are protected by water.

I'm gonna go with Xander Schauffele +1800. He's been sniffing around a win for a while now. In his last 10 starts, he's finished in the Top 5 six times without an official win. There's been a lot of buzz starting to grow because he hasn't won since January 2019, but he actually would have won East Lake had the scores not been staggered to start. He's 12th this season in shots gained tee-to-green and he's 2nd in shots gained overall. He's only played here twice but was T-2 here in 2018 when Webb Simpson's putter went bananas. X is on the precipice of going to the next level and a win here would do that.

Will Zalatoris Top 10 +600 - Another solid Top 10 last week at the API. Kid's rapidly becoming a star

Thanks for reading. Enjoy The PLAYERS Championship.