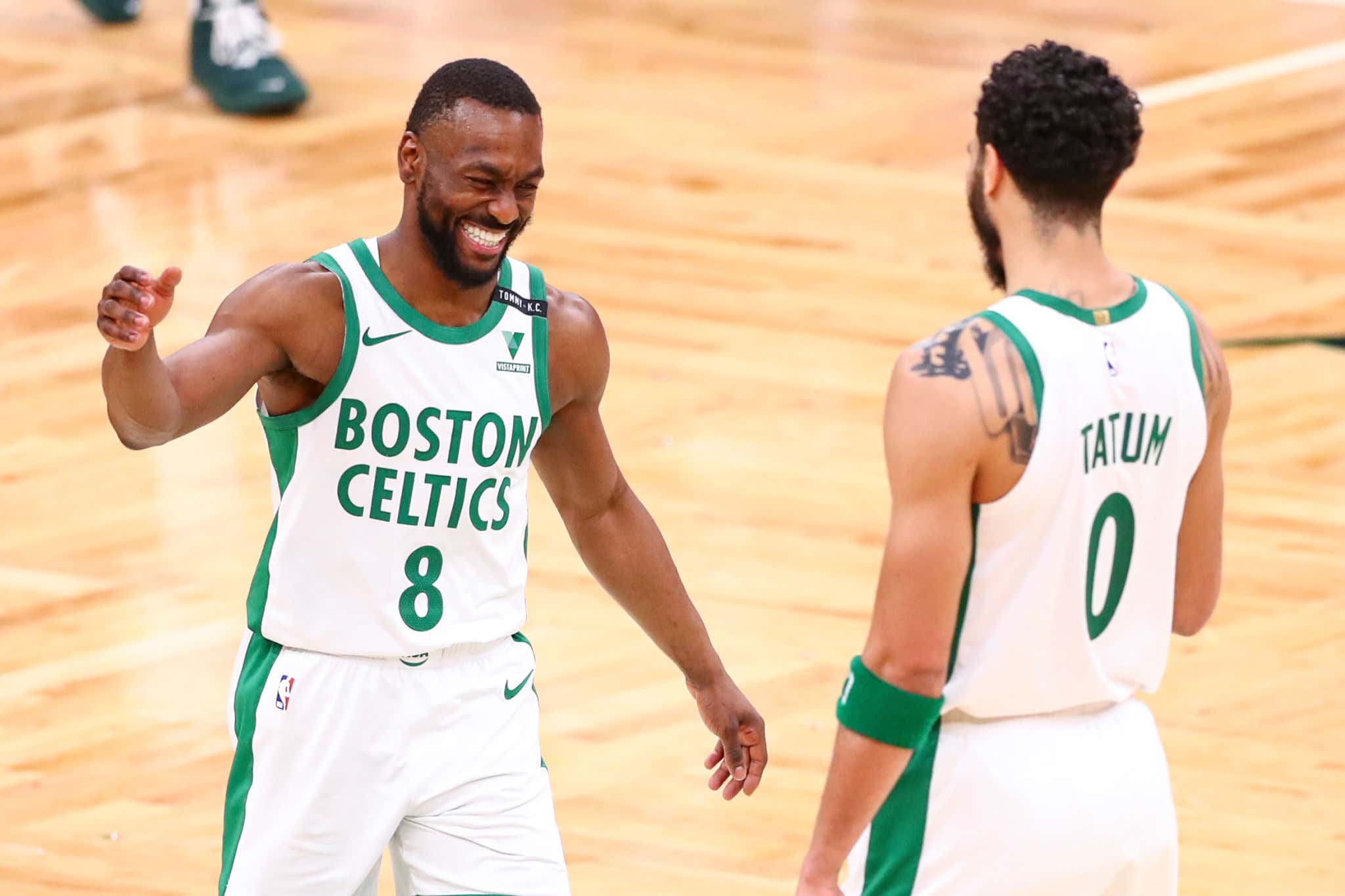 After the Hawks loss, Brad said postgame that the final 4 games of the trip were pivotal. Some could argue it was the most important stretch of their season. They needed something, anything really, that showed this team had some fight and could turn things around and end what was mostly a disastrous underachieving first half on a high note.

Well here we are. Now at the end of that 4 game stretch. I was never really a math guy, I always put shit in my TI-86 calculator growing up because fuck math, but I asked around if a 4-0 record was good and I have come to the conclusion that it's actually impossible to do any better. The Celts couldn't win more games during this stretch even if they tried. I don't want to sound dramatic and say that this 4 game stretch saved their season……but it sorta saved their season. Remember, this was a team many called dead like a week ago. Everyone needed to be fired, trade it all, blah blah blah. You woke up this morning with the Celts 3 back of the 3 seed. Very much still alive.

I'll say it once again. Perspective is important. 19-17 is still embarrassing for the most part. This team still has roster issues that we need Ainge to address at the deadline. But we all were looking for this team to show us some balls and finish the first half strong and on a high note and that's exactly what they did. Credit to them for that.

It just feels nice to have a different vibe as I write this blog. Lord knows we've all been through hell this first half. Guess what, there's going to be more stress and more torture in about a week. So take this mini break and enjoy it, because we haven't had the priviledge of feeling the joy of a 4 game winning streak since Tatum went out with covid. I won't lie, I prefer this life if we're being honest.

- Speaking of Jayson Tatum, this was easily the best we've seen him look in over a month. That's not me being hyperbolic, that's the straight up truth

It wasn't just the 27/12/5 which is always nice to see, Tatum finally had himself an efficient night finishing 9-15 (3-6). He also got to the line 10 times. I would go so far as to say that Tatum's performance was everything we ever want him to do. Take good shots, attack the rim, facilitate, and get to the line. This was just the second time Tatum finished over 50% shooting in his last 8 games and just the third time since February 2nd. He's shot the ball much better in two of his last three, so if you're telling me I'm going to be getting this version of Tatum after the break, which is basically his pre-covid version, well then that has me rather excited.

He wasn't great in all 4 of these wins, I'd say he flat out stunk in 2 of them, but it's just good to see him start to look like he's regaining his old form. I don't have to explain how important that is right?

- When it came time to close this game out, the Jays responded

You saw what Tatum did, Jaylen's performance had its own moments as well

He certainly wasn't perfect, but man was it great to see them both finally be effective and efficient at the same time in that second half. I feel like we haven't witnessed that in forever. Where both are making an impact at the same time.

Considering who the Raptors had active, I would expect as much. Who on that roster was someone you would say could guard either of these two? We'd be killing them if they struggled, but they came through. Now get all the rest you can and enjoy yourself in  Atlanta.

- Oh and if you think I give two shits that the Raptors basically didn't have a team, you clicked on the wrong blog. Could not care less. You still get a full win for a game like last night right? OK cool. It's something you'll see from the trolls out there..

"oh great they beat a Raptors team with everyone out"

Yeah…they did. And? Would you have preferred they lose?

- You know how I know things are weird? The bench was unstoppable. Pick a name (other than Semi) and they were incredible. Four players in double figures, no bench player missed more than 2 FGA, I didn't know what I was watching

Does it change how I feel about Teague and Grant? Not really. The roster still needs upgrading. But I will admit that it is nice to see Jeff Teague finally hit his floaters. Where the hell has that been all goddamn year. With Grant, listen I can't explain it. I don't get how he can go from unplayable to dropping 17 points and making all his threes and only messing up once on the defensive end. This might have been the best performance of his career if you can believe it.

With FastPP and Rob, I mean we already know they rule. Nothing shocking about their performance. They've been nothing but consistent since the season started. Rob continues to make an immediate impact the second he steps on the floor. Pritchard continues to show he has the game of a 15 year NBA vet. It was nice to see the second unit come through because guess what without that production the Celts have what would have been the worst loss of the year.

- How about this team coming out of halftime and dropping 35 points on 63/66% shooting. Where has that been? Do you know how weird of an experience it was to not see this team come out flat in the third OR blow things in the fourth quarter? Stay with me for a second, but I'm thinking maybe they should keep doing that. Just try it and see what happens.

- I'd just like to give credit for all the wonderful motivation that Brad must be doing during this 4 game streak. You see, when the Celtics lose, it's because he's not motivating his players. It's why he needed to be fired. It has nothing to do with what the players are actually doing on the floor, I was told it's all about Brad's lack of motivation.

That means this turnaround can't be because of what the players are doing. It has to be because Brad is motivating them. So thank you Brad.

- I tried to warn everyone on the pregame Clubhouse that this was NOT going to be a blowout win. I didn't care that the Raptors had no real players and were coming off a B2B. I watch this Celtics team play. I know what I know and I knew that this was going to be a dogfight because of course it was.

Well guess what happened. The Celts came out with the decision to play basically no defense, they left guys open and suddenly the Raptors were having their way. That was very frustrating. Even though I knew it was coming it still was annoying as shit.

I can live with someone like Norman Powell or Kyle Lowry going off. We've seen that before. My issue was giving up 30 points on 11-15 shooting to Chris Boucher and 22 points to Terence Davis off the bench. That was a disaster. I'm not really sure how you win a game where you allow 21 3PM and 49/42% shooting, but it happened. Some might even call that a little lucky. I'll accept that. A team drops 63 points from behind the arc, they usually win that.

- I didn't really get the Semi minutes and immediately he missed a corner three, got beat backdoor, and then turned it over. That was the end of the Semi experiment. He played just 7 minutes which was by far the least of any bench player.

- The strange part is we once again did not see Aaron Nesmith. Another DNP-CD. I straight up don't get it. Unless they had to sit him because he's about to be traded, someone explain to me how a guy that actually looked good in his minutes goes from 25 a night to 0.

What could it possibly be other than he's about to get traded. Especially when the other bench wings haven't really been all that good.

- Didn't exactly love how the Celts best three players were when it came to protecting the basketball. Jaylen/Tatum/Kemba had 8 of the 16, and Kemba had 5 by himself. That's way too sloppy. Just bad lazy passes that can't happen.

I also wouldn't say Kemba was all that great in this game. At least in the second half. He was great in the first with 15 points on 4-8 shooting, but then didn't score in his 17 second half minutes and went 0-3 with 2 TOs. That was bad.

- What else do you expect me to put here in a game where the Celts went 29-40 from the FT line. There are two ways to look at it. The first is saying holy shit they actually took 40 FTA. That's an insane number for a team that never gets to the line. The Jays combined to take 26 (!!!!).

The other way you can look at it is it's pretty pathetic they missed 11 FTA. Even more annoying that Tatum and Brown combined to miss 9. Jaylen missed 4 in the fourth quarter by himself. I don't even want to know what I would be like today if the Celts lost to a depleted Raptors team while missing 11 FTs, including 5 in the fourth quarter. That might have been it for me.

- I said it earlier but it needs to be repeated. You cannot give up 125 points to a team that is basically missing their entire roster. That just can't happen. I know we're all excited about this turnaround but things will NOT change in the second half if this team doesn't figure their shit out on the defensive end. And I know you want to tell me Marcus Smart coming back will fix it, and maybe it will help. But the truth is the defense stunk even when he was in the lineup. It's been an issue all year and until they show us a consistent stretch of actually playing the elite level defense we are used to seeing, I'm concerned.

But listen, 4 in a row is 4 in a row. Back from the dead and into the All Star break on a high note. It's what we all said we wanted and it happened, so now I want to see this team get healthy and come back next week and continue to build on it. It's finally starting to look like they are capable of doing just that.