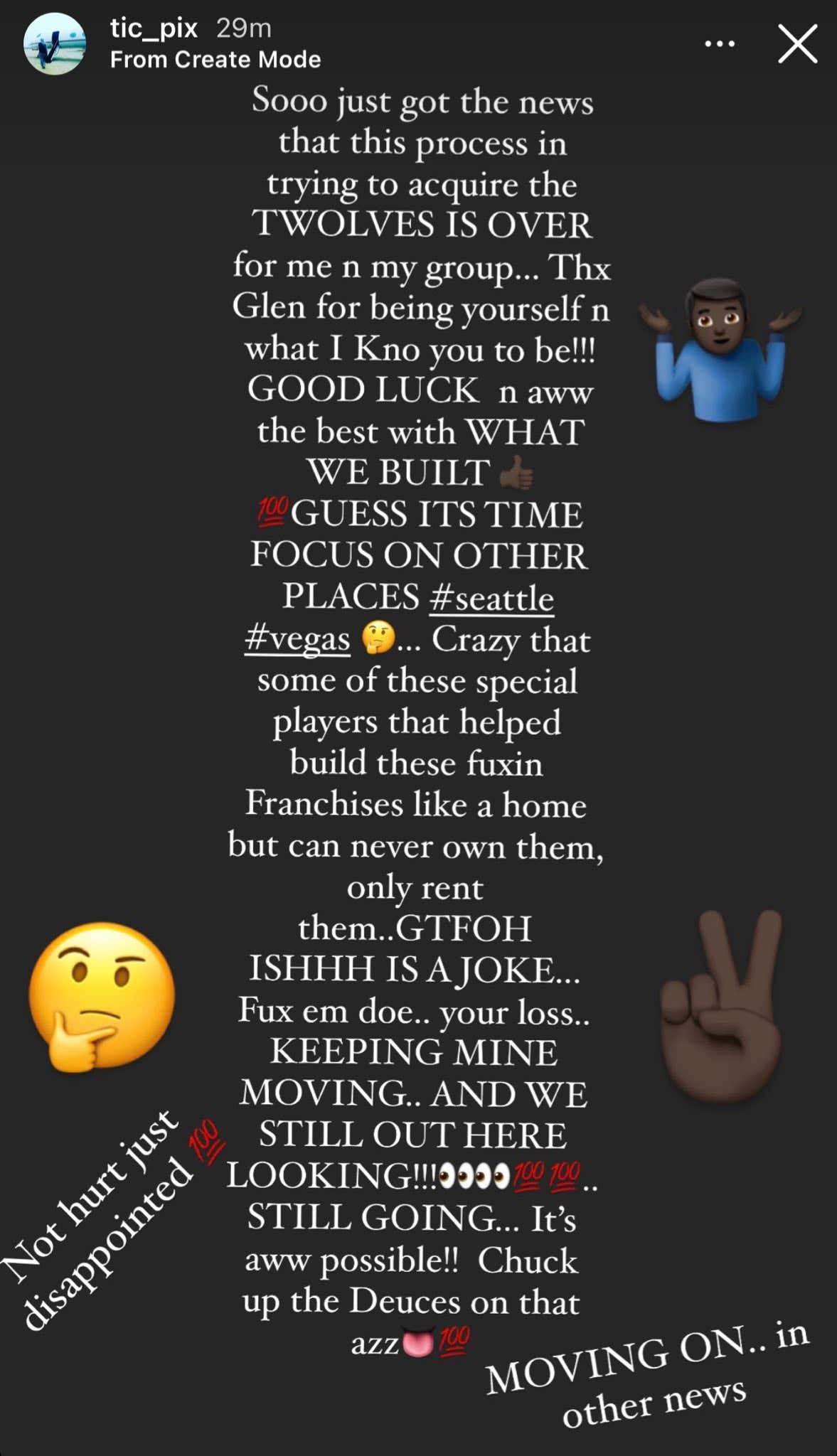 Serious question. Do the Timberwolves ever want to stop being a laughing stock in the NBA? Because this was the easiest no brainer decision the franchise ever had to make. Things have been dogshit for a LONG time in the Twin Cities. Outside of that one season with Jimmy Butler, the franchise has not had a positive moment since the KG era. Nothing they've tried has worked. Trades, coaches, GMs, none of it. Same shit every year. Well, now they had a gift from above. Kevin Garnett put together a group that wanted to purchase the team and turn things around. Nobody on the planet cares more about Timberwolves basketball than KG. Not even Timberwolves fans. Seems like a no brainer right?

So it makes perfect sense that they turned him down. Maybe his comments about Glenn Taylor was something that he couldn't overcome. I think KG made it pretty clear how he feels about that. Again, if you're going to get your money, shouldn't you want to sell to a group/person that actually gives a shit? Someone that can help change the narrative around your terrible franchise? Do we know how KG would be as an owner? Well no, but how could he be worse. Sometimes you need that breath of fresh air to change the direction of your franchise, and at the very least it would be a giant PR win for a team that desperately needs a PR win. Now, their record sucks, they fired their coach, and news like this will only make fans mad.

This makes me feel for any MIN stoolies out there. It was right there in front of you. Bring in KG and the Basketball Gods will reward you. It's honestly that simple. You see what he did to Boston? Changed everything. That was as a player! Imagine what would happen as KG being part of ownership? Something tells me they wouldn't be one of the worst teams in the entire league. Simply due to him being intimidating as fuck during practices.

But hey, if this now frees KG up and he can focus on bringing a team back to Seattle, that's fine by me. I just can't believe they turned down the greatest player in the franchise's history who had the group with the funds to get it done and they decided a different direction was better. You fucking idiots. Now they'll probably sell to the group that includes Aaron Afflalo or some shit and nothing will change for another 15 years.

The people of Minnesota deserved better. They deserved to have KG back in their lives in an effort to save their favorite basketball team. Now there's probably nothing but more misery on the horizon. Good job!