Just an objectively funny moment from last night's Bruins/Caps games. Trent Frederic took Ovechkin hard into the boards, Ovi got up and gave him some love back, and then out of nowhere Frederic dropped his gloves, expecting a fight. Only problem is Alexander Ovechkin is not an idiot. He was not about to fight a 5th liner in the 3rd period while down 1-0. 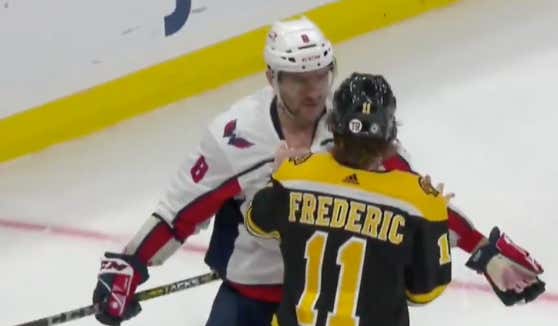 I don't know if I've ever seen such a clear "who are you and what are you doing here" look in my entire life.

And you know how this one ends. Frederic has to skate to his bench sheepishly, the Caps win the game, and he also lost his balls along the way too.

I don't know if I've ever seen one player get emasculated quite as much as Trent Frederic was last night. I like the kid, too. Reminds me of a young Stanley Cup Champion Tom Wilson, just ready to murder anyone at any given time, but buddy, you have to pick your spots a little better than that. That'll come with time I suppose, but it certainly could not have gone worse for him last night.

As for Ovi's love tap, it is probably the best $5k he'll ever spend.

Anddddd he's already made it back.

These two clubs go at it again tomorrow, will Frederic be out for revenge or has he learned his lesson? Let's not forget what happened the last time a child tried to mix it up with the Great 8…