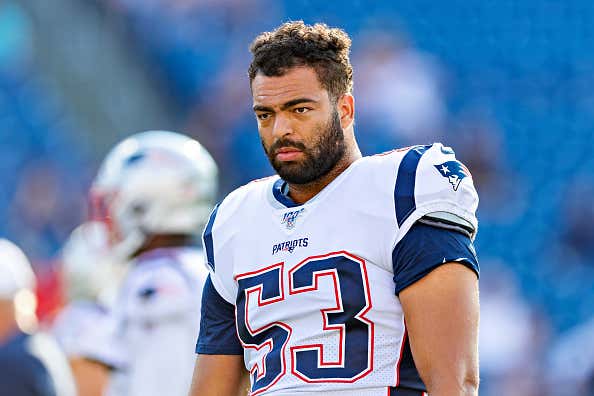 I've always been convinced that the reason [Chandler] Jones was traded was that Bill Belichick didn't feel he could be trusted to be where he was supposed to be when he was expected to be there. And that, despite all his obvious talent, he wasn't a system fit the way, say, Kyle Van Noy was. Because all 11 defenders are expected to fit together like a Spartan phalanx, and if one guy is out of position, the whole thing collapses.

So the sudden and unpredictable free agency Van Noy finds himself in, along with the fact he's a perfect system fit who unquestionably played his peak football in New England begs a couple of questions. Why wouldn't he re-sign with the Patriots? And what's taking so long? He should be here by now.

If nothing else, we know Van Noy is pissed about his release, and is open to the idea of coming back to Foxboro. From the Providence Journal:

Van Noy, who signed a four-year deal with Miami last year, confirmed the news to the NFL Network saying, “I am surprised and disappointed in their decision. As a captain, I gave my all to the team. I fought through a painful hip injury during the season, including spending a night in the hospital after a game. I was brought there to be a leader and I know my teammates looked up to and respected me. I am looking forward to making an impact on my next team, on and off the field.”

The 29-year-old spent three and a half seasons in New England and reportedly wouldn’t be opposed to a reunion with the Patriots. According to a source, “everything is on the table,” when asked about Van Noy coming back to Foxboro.

And if the social media interactions between him and his former teammates is any indication, it would be a popular move for everyone involved.

The McCourtys and Marcus Cannon, for example:

I mean, this is the no-braineriest of all no-brainers. A perfect marriage. A guy who knows the system forwards and backwards. Who thrived in it last year in Miami after being reunited with Brian Flores. Who's coming off a season where he posted career highs in passes defensed and tackles for loss and was just 0.5 sacks off his career best. To be clear, the Dolphins are releasing him to free up cap money, not for performance reasons. If he'd been on the roster five days into the league year that begins on March 17th, he would've had $12.5 million guaranteed in 2021.

The Patriots, in turn, would be getting back a plug-and-play veteran, a Day One starter along with Dont'a Hightower and Pat Chung. All leaders who would take the pressure off promising young guys like Chase Winovich, Josh Uche, Kyle Dugger and Anfernee Jennings, thus helping their development. And further reinforce a defense that was 10th in the league last year after being No. 1 in 2019. Before losing all those key veterans.

Also, Van Noy wouldn't be a hard sign. He just made $15 million last year, so it shouldn't take a huge deal to sign him. But if any franchise is in a position to pay him and be confident they'll get their money's worth, it's the Patriots. And the kicker is, for renting him for that one season, not only does a Pats division rival now have to carry $4.1 million in dead money, the Dolphins also had to send New England a 4th round compensatory pick, the 135th overall.

So doing the math, that makes Van Noy-to-Foxboro … a what? A win/win/win/win/win move? I've lost count myself. All I know is this has already taken longer than it should. This guy has already been one of the best trades of the Belichick Era. Let's make it even better by getting him back for the low, low price of nothing.