About a month ago I sent a handwritten letter to the McCaskey Family to sell the @ChicagoBears for the greater good of the city of Chicago. This is the response I got from George himself. 10/10 customer service. 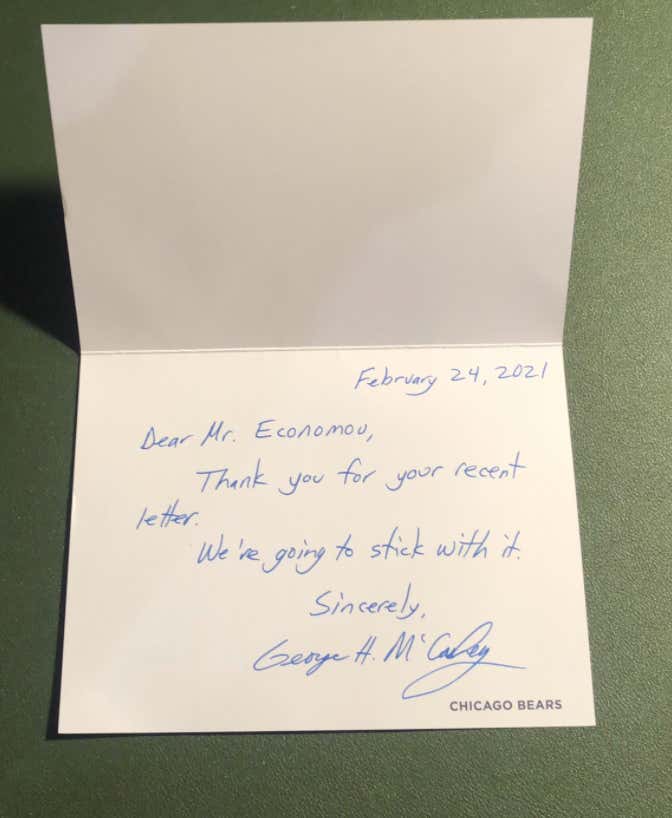 Thank you for your recent letter.

We're going to stick with it.

Well there you have it folks. Despite what a lot of people are hoping/wishing/praying, the McCaskey family is going to stick with it as principal owners of the Chicago Bears. They're going to persevere and gut it out. Grind another year as the driving force behind one of the preeminent brands in professional sports. Please respect their decision to keep fighting the good fight.

At a deeper and more serious level, you know George is being sincere when he says Sincerely. He's that kind of guy. He doesn't throw out frivolous Sincerelys at the end of hand written letters. He either means it or he doesn't say it and obviously in this case Mr. McCaskey is being sincere. He's both thankful for the recent communication yet forthright in his commitment to the Chicago Bears. You know it because it's right there in nearly perfect handwriting.

Overall though it's undeniably great having an ownership group that still carries these kind of day-to-day responsibilities. Like I would have no problem believing that one of George McCaskey's primary functions is keeping up with the fan mail at Halas Hall. Morning starts with coffee and email like everybody else. Then the Tribune puzzle section for an hour before digging into a literal burlap knapsack of specifically curated letters from Bears fans. Sometimes Ted Phillips pops in for a lunchtime game of Battleship just to keep the day moving. Otherwise that's your textbook morning for Bears ownership to me when I think about the current state of everyone's job security.

Fortunately there's a big press conference tomorrow. I earlier predicted it would be to announce Jay Cutler is coming back but now I'm starting to sense it's more of an indirect apology. Something like "We did our due diligence and turns out the best quarterback for the Chicago Bears is already in our locker room. Turns out Nick Foles is the guy."

Important to remember at this time things can always be worse. I mean that Sincerely. The Cubs, Bears and Sox just made the playoffs. The Bulls and Hawks are on their way. Maybe not the pinnacle of professional sports right now but at least I get to use these GIFs.

That's Chicago Sports right now. Really no clue what anyone is doing but end of the day it's not too fucking bad.