I've watched this goal 53 times this morning because it is just that perfect. It is the quintessential Patrick Kane goal ever. Odd man rush, slick little toe drag around a defenseman who was completely overwhelmed and overmatched, and then the snipe. A quick release that he didn't have when his career started. That's the thing about Patrick Kane. He's better now at 32 than he was at 22. He keeps getting better all the time. The work ethic, the leadership, the defense, the skill, the conditioning, Patrick Kane has become a COMPLETE well rounded absolute superstar and he should become the MVP of the league as well. There's nobody I'd rather have leading this team. He truly does it all. He now officially is a Hall Of Famer even if he never plays another game, but he's not even close to being done. Kane has the type of game and the work ethic that is going to allow him to play deep into his 30s at a high level. I've loved every single moment of his career and this goal was the cherry and best of all...two more points in the standings

400 goals and now a total of 1056 points puts him in 7th place all-time for American players. 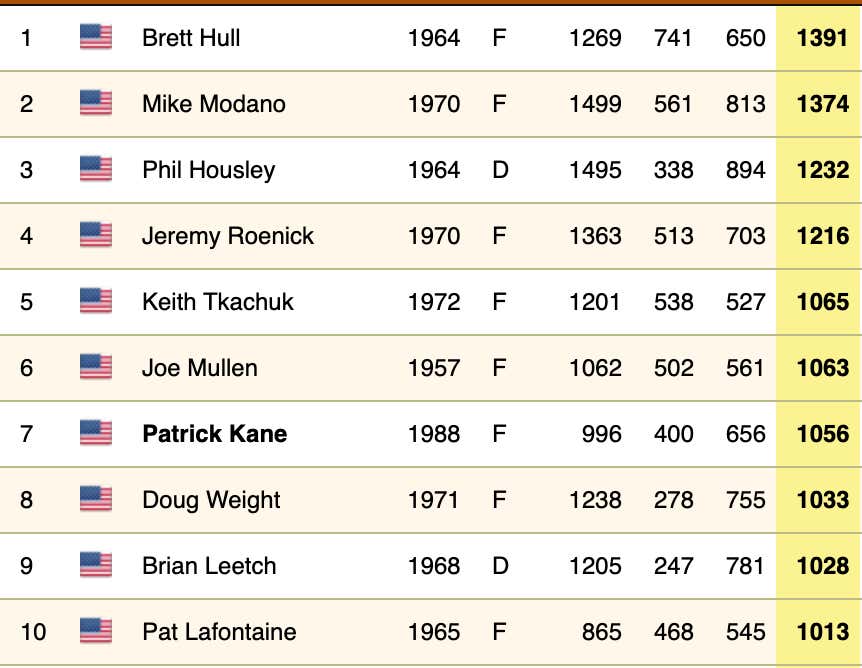 Kane has the 3 Cups. He has one MVP. I feel pretty confident that if he plays another 5 years at a point per game pace that'd be roughly 400 more points. That'd be good enough for most all-time. When you combine the playoff heroics, the awards, the point totals, and the fact that he saved an original 6 franchise and the fact that he might save it twice makes him the unquestioned #1 greatest American ever. Nobody I'd rather have watched every night for the last 12 years. We are blessed in this city. JoinOrDie. ForTheCulture