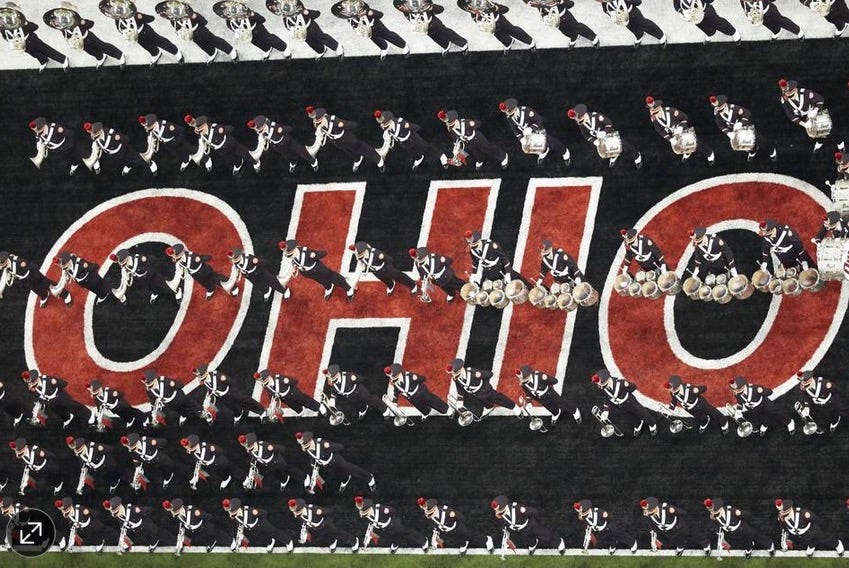 WSJ – A book of parody songs updated in 2012 and circulated privately by members of the Ohio State University marching band included a sendup of the Holocaust with joking references to furnaces used in Nazi concentration camps and the train cars used to transport Jews to their deaths.

The Holocaust song, called “Goodbye Kramer,” whose lyrics haven’t been previously disclosed, includes lines about Nazi soldiers “searching for people livin’ in their neighbor’s attic,” and a “small town Jew…who took the cattle train to you know where.” It was written to be sung to the tune of the 1981 Journey hit “Don’t Stop Believin’.”

In a statement, Ohio State said the songbook reflected the sort of “shocking behavior” that the school is “committed to eradicating from its marching band program.”

The songbook, which was reviewed by The Wall Street Journal, included an introduction that noted “Goodbye Kramer” as a new addition, along with a parody of the fight song of University of Nebraska, then a new member of the Big Ten conference.

Band members were also urged to keep the book secret. “Take it with you on trips and to parties. But never leave this out of your sight,” it says. “This book is for OSUMB members only, Past and Present. If they were not out on the field in front of 105,000 crazy fans in black (OK, navy blue) wool uniforms, they do not deserve to see this.”

The existence of a band songbook of crude parodies first came to light in July 2014 after a university-led investigation into the band’s culture. At the time the director, Jon Waters, along with many students and alumni from the band, said the songs… featured lyrics about rape, bestiality and homosexuality.

But a second, more in-depth investigation of the band, commissioned by the school in late 2014, mentioned that the updated songbook contained a “highly offensive song regarding Jews,” although it didn’t disclose the lyrics. “Head to the furnace room, ‘Bout to meet your fiery doom,” one line of the song reads. “Oh the baking never ends, It goes on and on and on and on.”

Real, REAL tough year for the Ohio State marching band. Real tough. The once esteemed band, coined by Woody Hayes as “The Best Damn Band in the Land,” who seemed to defy all social conventions and rise above common band nerd stereotypes – now finds themselves racked in turmoil amid yet another controversy.

Dispatch – Ohio State University has fired the director of its marching band and is expanding an internal investigation that uncovered a deep culture of sexual harassment among students that reportedly has existed for years.

The two-month investigation, triggered by the complaint of a parent, revealed a cascade of evidence that students routinely harassed one another –– often directed at new band members by older students –– and that director Jonathan Waters knew about it or should have known.

Examples of abuse include an annual midnight band practice at Ohio Stadium in which men and women were expected to march wearing only their underwear. In one recent year, a student suffered alcohol poisoning at the practice. Students led the rehearsal, but staff members, including Waters, were there, too.

Some other traditions: All new band members, or “rookies,” were given nicknames, many of which were sexually explicit. Rookies were forced to perform “tricks” on command. In one case, a female student was told to imitate a sexual act on the laps of other band members, including her brother.

Several witnesses said that students performed a “flying 69” on tour buses, in which band members hung from the luggage racks and posed in a sexual position. Waters was on the bus when that happened as recently as last fall, according to a band staff member who quit last year.

And now a Wall Street Journal investigation revealing the lyrics to the songs in their super secret band book. Everyone’s favorite classic “Don’t Stop Believin’,” only instead of the happy lyrics you and your frat bros mosh pit to at the end of formals, it’s about Nazis hunting down Jews hiding in attics, stuffing them in cattle cars and shoving them into ovens and gassing them to death. Nice.

I’ll admit the first episode seemed like a little bit of an overreaction to some harmless college kid stuff. (Although I guess the whole “Jewboobs” thing takes on a much more sinister meaning now that we know they didn’t just admire the Jewish girls boobs but they fantasized about Nazis sticking her in a furnace.) But this one might be a little harder to shake, what with all the Jews out there who might take offense to this sort of thing.

Should have known there was some funky shit going on with this marching band.  No marching band gets this much fame and success without it going straight to their heads.  Featured on Sportscenter, iPad commercials, all the college blogs.  Only a matter of time before they were doing flying 69s on the tour bus and forcing Tits McGee to give Twinkle Dick lap dances while Ballsacagawea tooted out “Death to The Jews” on his trumpet.  That’s just a common progression.

I guess all we can do is remember the good times….(before the hateful anti-semitism)