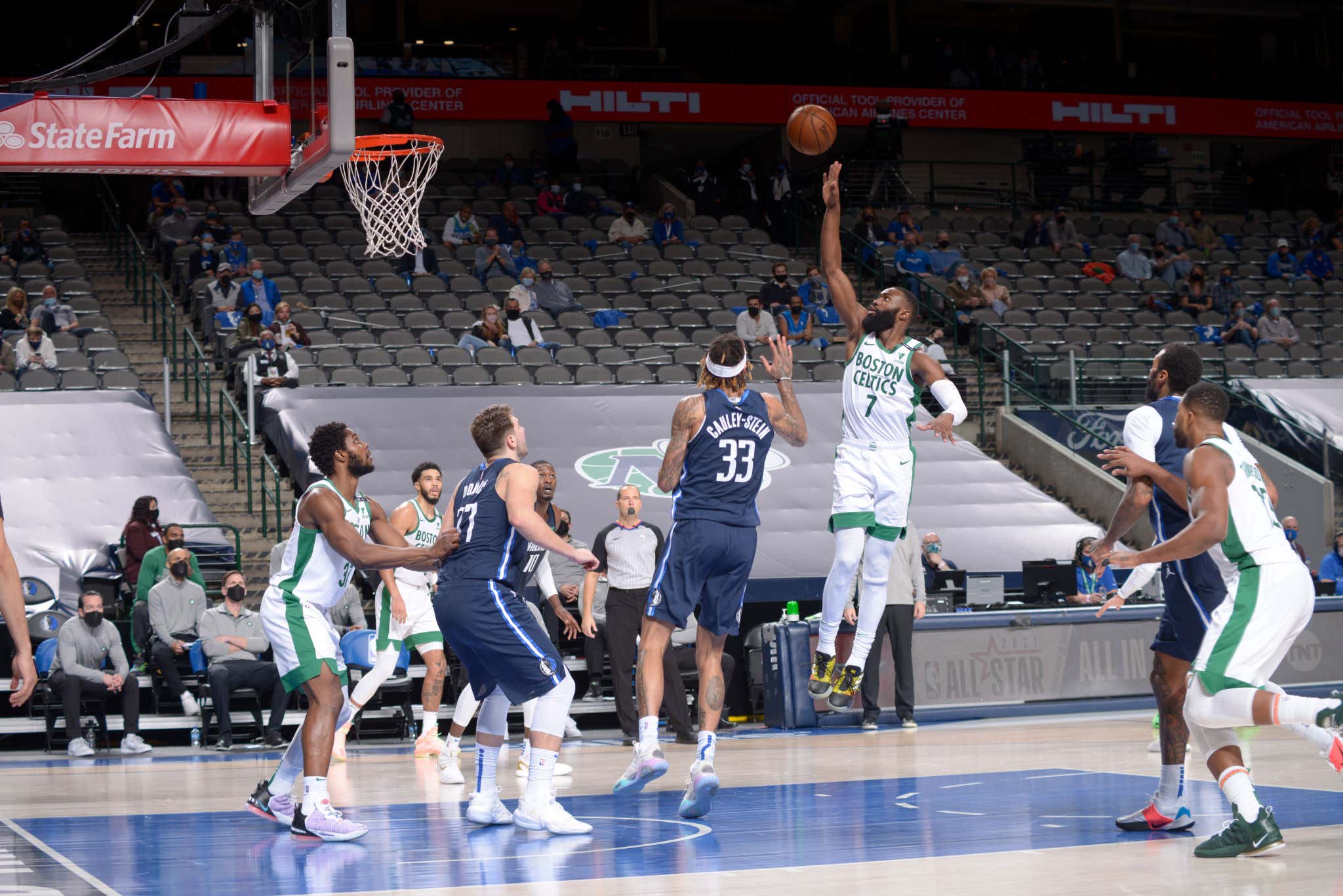 (you must click play and have this going throughout the blog. Go back up top and click it again once it ends. Those are the rules)

Pain. That is all I feel right now. Well I shouldn't say that, I also feel anger, frustration, embarrassment, shame, the list goes on and on. Mostly pain though. I mean what else is there to feel right now when talking about our beloved Celtics. Why don't they love us back? Why must they drag us through this emotional hell each and every time they step on a basketball court? It's starting to get a little silly. I mean this is the first thing I see when I open Twitter today

It's truly impressive all the different ways this team continues to find ways to rip our hearts out and shit down our throats on a nightly basis. Lose to under .500 teams? Yup! The Celts have 7 on the year. Lose close games? You fucking betcha! This was now their 8th loss by 6 points or less. They have 4 losses by 3 or less. You see that tweet, they've given up the most go ahead buckets in the goddamn NBA. If that doesn't cause you pain well please fucking tell me your secret because this shit is ruining my life.

The Celtics aren't just bad right now. That's an insult to teams that are bad. They are cursed. Yeah, that sounds crazy but at the same time tell me I'm wrong. It's really all I have left as I try and figure out what the hell is going on. How can one team find a way to be so unlucky in these close games with basically all the same players from last year's team that was actually decent in the clutch? A curse, that's how. The vibes are extremely fucked up for whatever reason.

I said it during the game, but this is the reality of the situation

Tell me I'm wrong. You can't. This team needs an exorcism or something and I'm not even remotely joking. Put it on the table. You need to try anything and everything because this 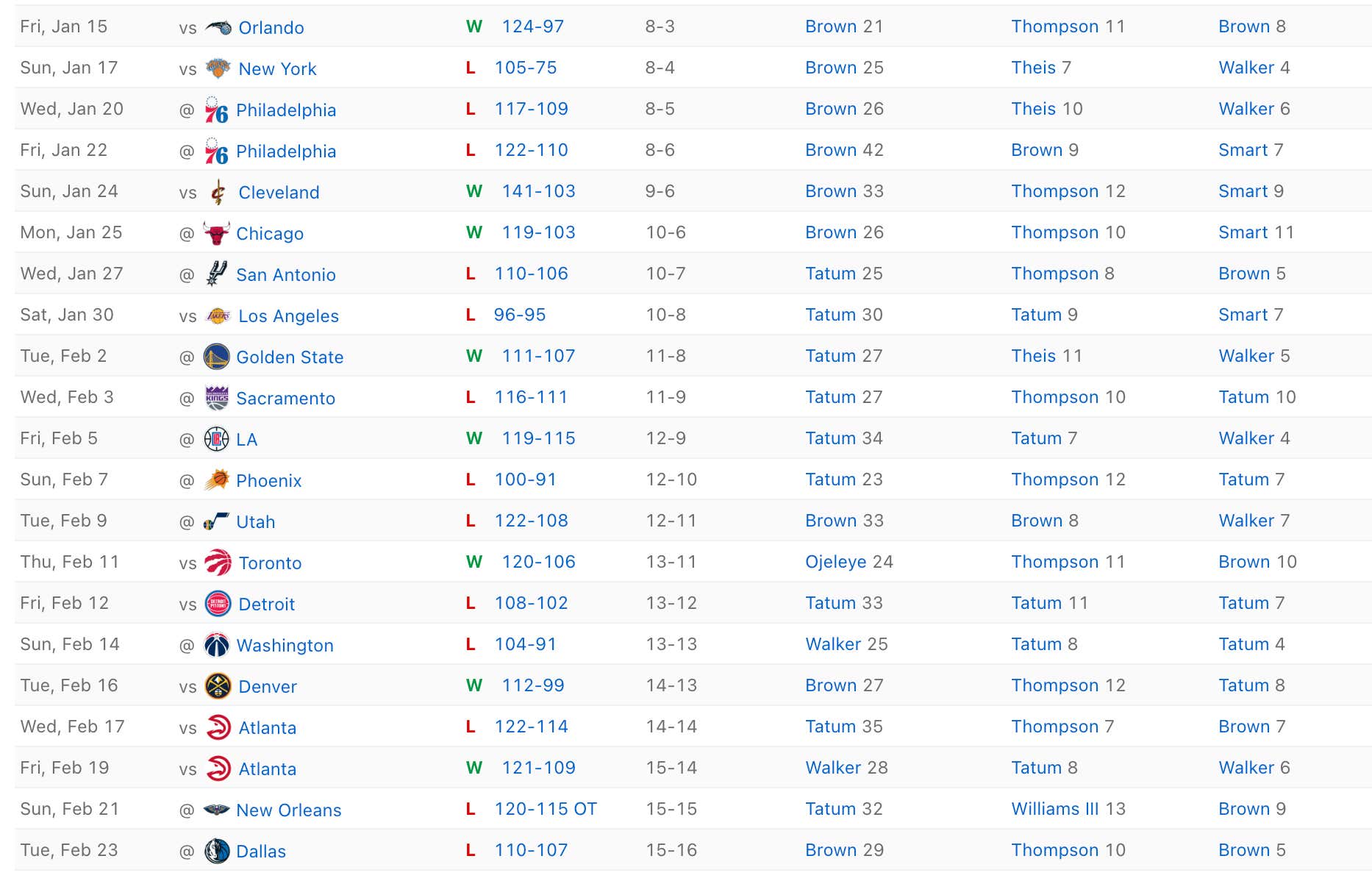 needs to stop. Please. 8-3 to 15-16 in a little over a month. How is that even possible? You stink combined with a little bit of a curse mixed in. That's how. It'd be one thing if these Celts losses were never close, a game where they got beat wire to wire. But that's not what this is. Half of their losses are close. That's what makes it all so painful.

All we can do is blog through the pain, so let's do it.

- I'm not sure I even have the energy for this section but I'm desperate to look at anything to distract me from the fact that this team sucks dick right now. One thing I've found to be helpful is just watching Jaylen highlights over and over and over

I have a confession. I was pretty sure the Basketball Gods were throwing us a bone when his go ahead jumper fell. Then again when he made that layup to tie the game with 5 seconds left. On the same night he finally made his first All Star Game, I was convinced he was being rewarded. Stupid idiot Greenie you goddamn moron.

I still loved how he played in this game though. A little bit of everything offensively, some real nice reads as a playmaker, he was 12-20 from the floor and had 10 points on 5-7 shooting in the fourth quarter. Jaylen showed up. Obviously, it means nothing since they blew it, but let me have this. I'm down bad.

- For 3/4 of this game, Kemba's offense was an issue. I wouldn't even say he played all that well, maybe a C+ game for him, but I;m putting him here only for his fourth quarter. That was good. Better late than never I suppose and the reason they were able to claw back in that quarter was largely due to his 14 points on 5-8 shooting (3-5 from deep). That was the Kemba we all remember seeing. Now, it for sure would have helped if he wasn't 3-11 heading into that fourth quarter, but in a big pressure moment, Kemba did come through offensively. That's what gives me hope.

His 21/4/3 on 8-19 does look a little better than how I would say he played, but if that fourth quarter is something that can help give Kemba his shooting confidence back then that's all that matters. Who knows if that happens but his issues seem to be rhythm related, not health related.

- Hey, at least they fought back in a fourth quarter. Unlike what we saw against the Pelicans, that was actually refreshing. Maddening that they were even in that position to begin with, but at least we saw this team punch back.

- Once again, I'm not really sure where to start. I suppose we can start with the three point shooting of the Celts three best players. Tatum/Kemba/Jaylen combined to shoot 9-29 (31%) from behind the arc. That's an issue because for all three, nearly half of their FGA were threes. It's not like the Mavs were any better (13-33) but I'm not blogging about the Mavs I'm blogging about this inept team. They say it's a make or miss league well when do we get to experience the makes? Honest question.

- Deep down we all knew there was trouble on the horizon in the third quarter when we saw this team finally buckle down defensively and get 8 consecutive stops, only to not score. That's a death wish right there folks. At the 10:44 mark, Luka hit a three to put the Mavs up 60-58. They did not score again until the 5:13 mark. The score? 65-62 Celts. It was the same old story in terms of an offensive lull. Missed threes, sloppy turnovers, missed layups, you name it they did it. How deadly were the last 5 minutes? The Mavs closed on an 18-11 run. The Celts had their opportunity to put this game away, and they blew it.

- Which brings to me the offense in that third quarter. The Celts shot just 35/12% with 4 TOs. They had nearly the same amount of TOs as FGM. Once agin there was no ball movement, no player movement, just a whole bunch of standing around and watching.

This is basically how every Celtics offensive possession went in that quarter.

The Celts pass the ball around the perimeter with no real purpose, usually one or two passes, someone holds the ball for 4-5 seconds, then passes it back out up top to one of the Jays who are around 30 ft from the basket. Then everyone stands around while they try and make something happen in the final 7 seconds of the shot clock, usually ending up in a poor quality look.

This is where I kindly ask Brad why the fuck can't he call a real play? This is where I ask the players why do you keep doing that possession after possession if you know it doesn't work? Someone explain that to me.

- I know there are some out there that want to remind me that Marcus Smart didn't play and that he probably impacts these close games. While that may be true, let's also tell the truth. The Celts were around .500 when Smart played. They've had more than enough talent available to win some of these recent close losses. That's not an excuse for the poor quality of play we are watching. Everyone was available last night outside of Smart, that is enough to win. Period.

- Everything about this play makes me irrationally angry. Just so bad

You learn that you should pass the ball in this situation when you are like 10 years old playing in your JCC Biddy Basketball program. Just pass the ball. Make the right basketball play and you will be rewarded. Go selfish stupid shit like this, and you blow it. Infuriating stuff.

- Just an absolute slaughtering when you look at the difference in bench production.  51-19 difference and it didn't even feel that close. The biggest takeway is the Mavs second unit players actually look to be scoring threats. Jalen Brunson tore this team a new asshole because he was aggressive offensively. That's what the Celts second unit doesn't have. They have guys that will take open looks when passed the ball, but they have nobody who is consistently looking to score that defenses have to respect. I mean Brunson outscored the Celts unit by himself. That's an issue.

- Did the Celts maybe score too quickly at the end? Maybe. But at the same time I was just happy they were aggressive and attacked the basket with Jaylen and he made the layup. We all should have known that pain was coming, but Luka is like a 30% three point shooter. Shit happens.

- Let's talk about those Luka daggers. The first one, I mean why switch Theis onto Luka. He's BBQ chicken the second Luka realizes who is guarding him. There was no doubt in my mind that he was making that three as he sized Theis up. Not just because Luka is a big time shot maker in those moments, but because it was against Theis. Only bad things happen to Daniel Theis. It's remarkable.

On the second one, credit to Luka for an insane shot, and it's not like it wasn't contested

but even still I don't love the soft switch here either by Jaylen. I feel like you have to just fight through that screen. Nesmith got a little too high on his switch and in that situation, you know Luka only has the stepback. It's an unreal shot, but a defensive collapse at the same time.

- Oh, this doesn't help the pain either

- Why do I think the Celts are cursed? Shit like this

Shit like this only happens to teams that are going through it. Who didn't know Brunson was making that three after the Celts fumbled the rebound on a missed FT? That's where we are at. Can't even grab a rebound when two Celts are right there. Infuriating stuff. Then, to make matters worse they immediately turn it over on the other end and then come right back down and let Luka walk to the rim. That's losing basketball. That's shit bad teams do and I guess it's no surprise the Celts are doing it.

I don't even know what else to say. We're watching some of the worst basketball of the Brad Stevens era. Just when you think there can't be a more painful way for this team to lose a game they should win, they find away. I am terrified about what's going to happen tonight in Atlanta. That's where I am currently at mentally. You can't trust this team for shit.

I don't know how many more wake up calls this team needs, but for the love of christ will you please get your shit together and stop ruining my life. It's all I ask.