Buckle up everybody because as we inch closer and closer to the March 25th trade deadline you're going to see more and more of these type of reports. It's one thing to hear about guys like DeMarcus Cousins and possibly other Rockets players hitting the market over the next few weeks, it's another thing when you start talking about someone like Kristaps Porzingis.

For those who may not watch a ton of Mavs games, Porzingis missed some time to start the yearw with his knee issue, but in 17 games is putting up 20.5/8.2/1.3 on 47/35% with 2.2 3PM a night. Not exactly terrible as a #2 option. But there is some truth to the fact that their defense stinks out loud. On the season, they rank 25th in team defense, just slightly ahead of the Wizards. They give up around 113.8 points a night, which is slightly ahead of the 7-24 Timberwolves.

The confusing part is why would they want to bail on the Luka/Porzingis pairing while they are currently in the play in game. Shit, they are only 3.5 games from a top 5 seed. Their season isn't over by any means. It's also interesting that they reached out to the Warriors about this, considering it's GS who is right ahead of them in the standings. The problem is they need to find a team that can make the money work in any potential deal. Porzingis is not cheap 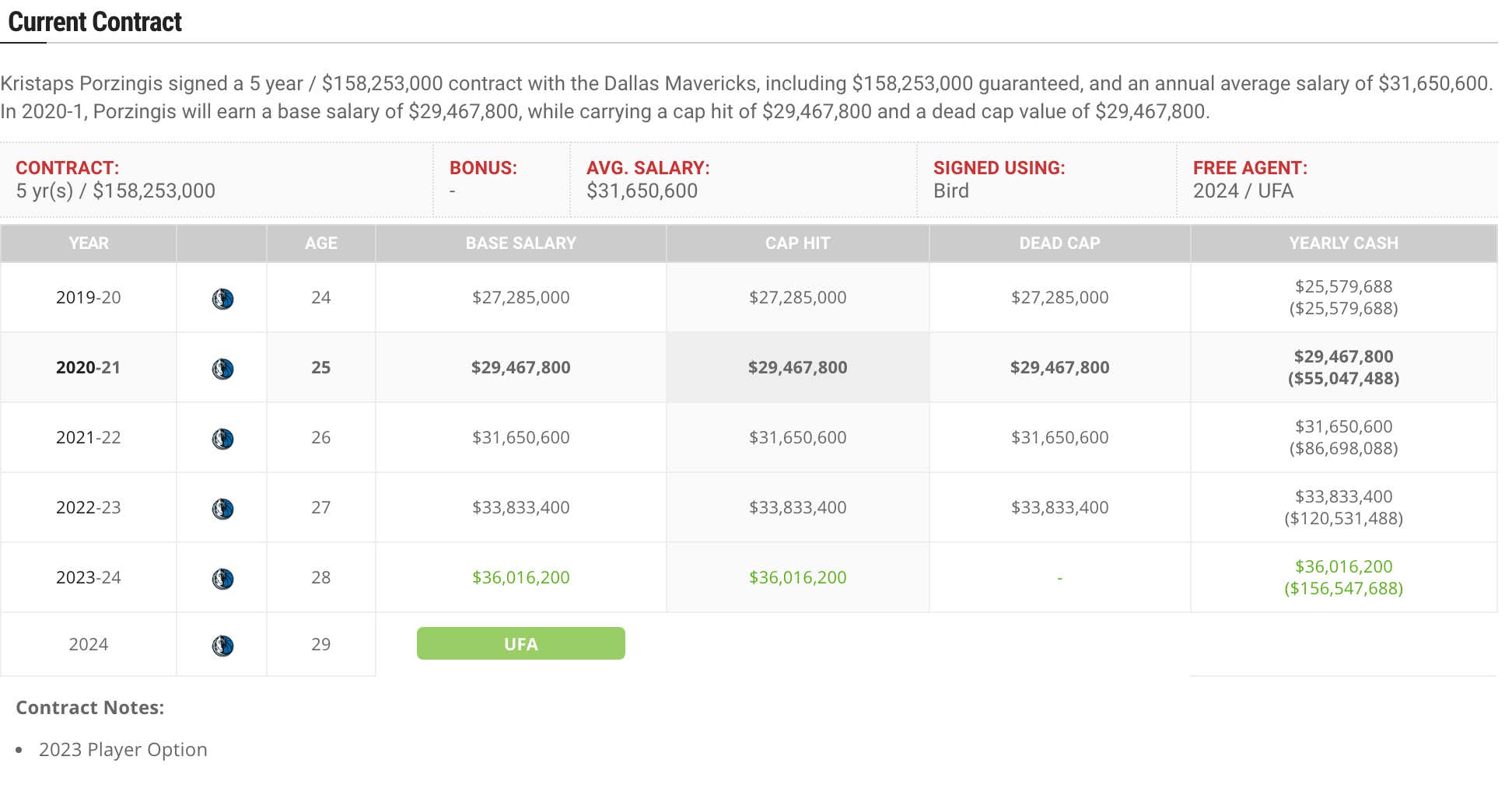 But the Warriors do have that Wiggins money that could potentially make things easier. Porzingis does give you that unicorn production in a sense that he's a great stretch big who also is an elite rim protector. You don't see those very often, but it's also true he's having his worst defensive season of his career. But how much of that is due to the talent around him? Who on the Mavs would you say is a better defender?

With his price and knee issues, I'm not sure he's the easiest player to move, which is why it's surprising that this news is out on the internet. If you can't move him, you kind of fuck up your locker room right? Also, Luka had to sign off on this right? If that's the case and you don't move Porzingis, how does that impact the relationship of the two best players on the Mavs? I can't imagine they do anything roster related without getting Luka's stamp of approval, that would be very very dumb.

So it begs the question, would you want your team to trade for someone like Porzingis? It's about as risky a decision as it gets. The Mavs took that risk when they traded for him, and his health has been an issue. The production is there, but the court time hasn't. If you're bringing him in not only are you paying that price, but you are going to most likely have to give up a lot just to get him. He's only 25. That means you're looking at one of your best players that has a high salary price plus multiple first round picks. Is there even a market like that for him?

Personally, I'm not going to waste time thinking about it for my favorite team. If the Mavs want to improve their defense, they aren't taking anything the Celts could offer. Maybe we see a big three team deal or some shit in the next month, and if this is all true Porzingis would definitely be the biggest name available.

I will say this though. There's no denying that the Knicks won this trade right? Feels weird to say because Porzingis might be the best overall player, but the Knicks have actually done a pretty good job re-tooling after this trade. They're fun now and sneaky competitive. Can't say many people ever saw that coming.