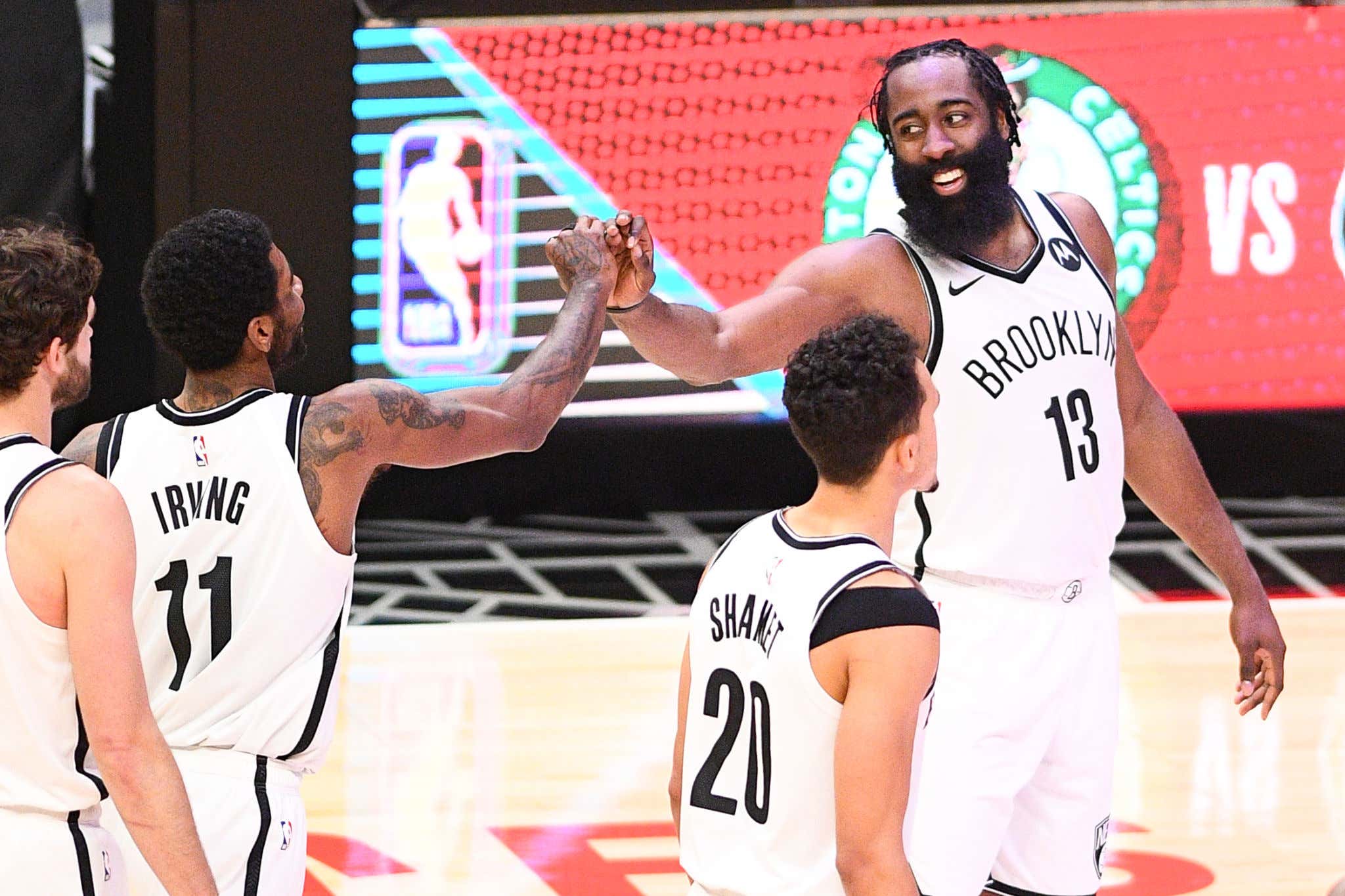 The Brooklyn Nets brought in James Harden a little over one month ago, on January 15th. When that trade happened, there were certainly questions. Things like

2. Who will sacrifice and adapt to their new role?

3. How will the defense look?

Since that date, they've had to deal with some bullshit in regards to Durant and health and safety protocols then a little injury yet still have a 13-6 record. On the season the Nets are 12-4 against teams .500 or better. That's the most wins in the NBA, even more than the Jazz who didn't lose for a legit month. They've only had Harden/Kyrie/Durant for 7 games since the trade.

Even in this small sample size, the answer is pretty clear for some of those questions

Easily. That's what happens when James Harden decides to shift his game back to more of his OKC days. The dude leads the league in assists. He's become a selfless player, which makes him even more unstoppable. The team has made the transition into Harden being the primary point guard and the rest is history. The Nets have the #1 offense in the NBA since the trade with a 120 Ortg. They have a 61.6% AST%. There have been no issues whatsoever even with Durant back in the mix in terms of sharing the ball.

2. Who will sacrifice and adapt to their new role?

When you ask this question, nobody is talking about KD. KD doesn't adjust, you adjust to KD. That meant it was going to come down to Harden and Kryie when it came to sacrificing and forming a new role. It was fair to question if either would. Well, they've both adapted to their new roles and then some. Kyrie is fine passing the point guard duties to Harden, and Harden has made the biggest transformation out of everyone. There are no egos. There is no drama. That has to be a pleasant surprise for Nets fans. Harden is only taking 15 FGA a game as a Net! That's around 7 fewer than his Rockets days. There's no denying he has been more than willing to sacrifice his shooting in an effort to become an unstoppable passing point guard.

Then, with Durant out and the Nets need him to be Houston Harden, he can do this

3. How will the defense look?

It's bad. Since the trade the Nets have the 26th ranked defense in the league with a 117.6 Drtg. Even during their current 6 game winning streak, they've only had the 21st ranked defense. This is obviously the biggest question that the Nets will have to address both at the trade deadline and then in the postseason. You can't win a title if you can't defend. Look at the history of the league, the teams that win titles have either a top 10 defense or LeBron.

So while this may be a negative for now, that doesn't mean it'll always be that way. But it is the one question mark this team has while they look incredible everywhere else. Having Durant consistently in the mix will help. Maybe upgrading at center will help. The offense will carry them in the regular season, but they have to tighten up that end of the floor by the time the Spring rolls around.

It's pretty undeniable that the answer here is yes. It not even can work, it is working. Sure the Nets play down to their competition a little bit (8-8), but given the fact they crush the good teams, I wouldn't say it's the same issue as it is for someone like the Celts (7-7) who can't beat good teams either (8-8). Considering only good teams will be in the playoffs, you have to feel confident that the Nets can hang and beat anyone. They beat the Bucks, took care of the Lakers, just beat the Clippers, swept their recent 5 game West Coast trip, and their only loss to PHI came in a game where both Durant and Kyrie didn't play.

If what we are seeing from the Nets isn't it "working" then what would you define "working" as? There has been zero drama, the superstar players have accepted their roles and are playing connected basketball, and they are winning games even without Durant in the lineup. So far, it's been about as ideal as you could ask for once that trade was finalized.

Even when they hit a little skid and lost 3 in a row to TOR/PHI/DET, what did they do? They responded with this 6 game winning streak and perfect West Coast trip. There was no implosion. There was no drama or anything along those lines. I think the players, and really Kyrie and Harden deserve a lot of credit for that. Their ability to be willing to make this work is what has sparked everything. Last month we didn't know if everyone would buy in and if that would ultimately hold this team back.

Well, everyone has bought in and then some. Imagine how things can look when this group plays together for more than a month. Imagine when the Durant/Harden/Kyrie trio has a consistent run of games together. If this is the worst it's ever going to look, well that's pretty fucking terrifying.