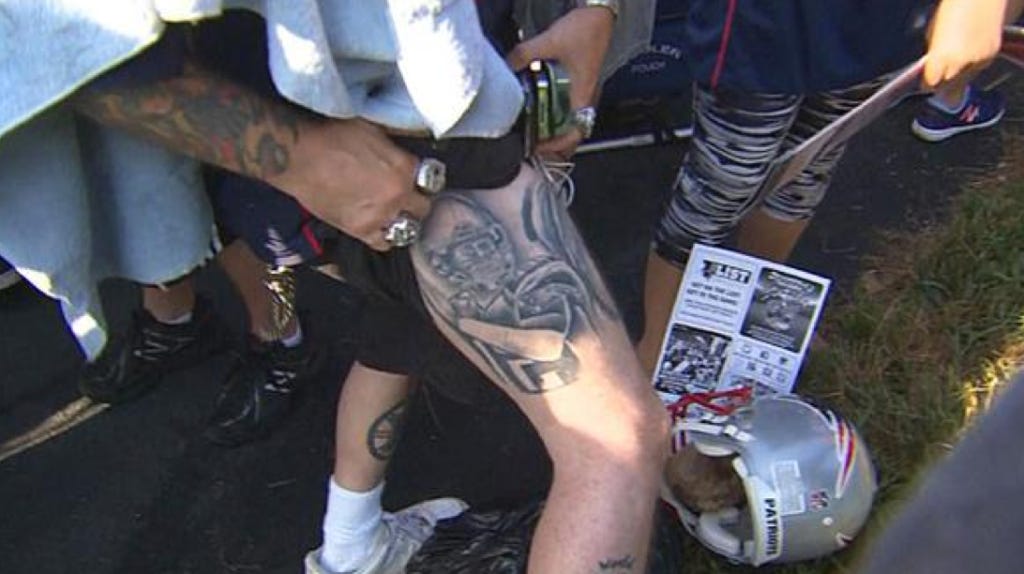 (CBS) – A Watertown couple was among the 10,000 fans who came out to the first day of New England Patriots training camp on Thursday as they continue to postpone their Honeymoon until quarterback Tom Brady is allowed to take the field for game action. Paul and Kellie Goodrow were married on May 9, but have not yet gone on their honeymoon. As the couple told WBZ in May at the Free Tom Brady rally at Gillette Stadium, they plan to postpone their honeymoon for as long as the suspension stands. “We want to support Tom Brady,” Paul said on Thursday as he waited to get in the gates for Patriots training camp. “This is what we decided right when the suspension went down. When we got married, we talked about it.”

Paul Goodrow can share a foxhole with me any day of the week. He’s a warrior, a soldier. What’s he supposed to abandon his post exactly when he’s needed? Hell no. Paul knows it’s no time to take a Nantucket vacation. Gotta stay on the watch. Gotta grab your replica Super Bowl rings, your three cell phones, and head down to training camp ready for war. You know the footprints in the sand poem? This is kind of like that except we’re putting Jesus on our backs. Tom/Jesus has been with Paul and I for 15 years but now it’s his time of need, we need to carry him for now.

Although if I’m Kellie I’d be a little suspicious that this is a scam. Like those celebrities who said they wouldn’t get married until gay people could and then once gay marriage became legal then had to be like, “shit, didn’t think that was gonna happen.” Brady’s suspension is gonna get overturned then Paul’s gonna tell Kellie “I’ve got 26 bucks and a case of Busch. Let’s head to Nantasket, babe! Happy honeymoon!”