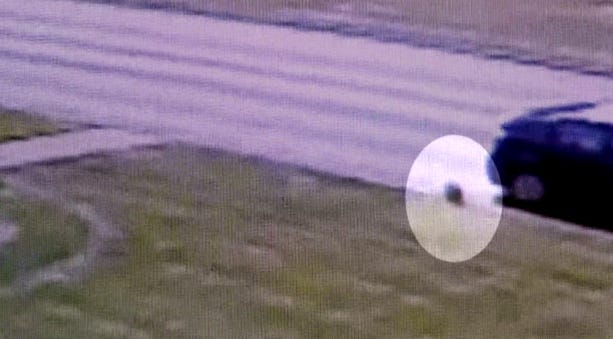 NJ - The search continues in New Jersey for a man in a van who police said drove off with a bag filled with tens of thousands of dollars that was accidentally left behind by an employee of an ATM company. Surveillance video shows the costly mistake made by employees at ATMForUs.com in Mahwah. In the video, a worker is seen leaving a building at 31 Industrial Avenue. Police said he was reloading ATMs and was carrying $141,000 in a small, unmarked bag. He sets the satchel down and walks around to the back of his car before getting in and taking off. The bag, filled with $10s and $20s, was left behind on the lawn, police said.  Surveillance video then shows a passenger of a white work van picking up the bag full of money and driving away. Police said surveillance video from an automotive business across the street shows the same van grabbing discarded tires from a dumpster just minutes before their big pay day.  Authorities believe the thieves first spotted the bag, picked up the tires and then noticed the bag still sitting there as they left. Police said once the worker who left the money behind returned and realized what happened, an ambulance needed to be called for him.  Police are now hoping the people who took the bag will do the right thing and return it. “Anytime you find property that’s discarded on the side of the road, it’s not just fair game for you to pick it up and say, ‘Well, you left it, I found it,’” Hunt said.

I hate poor people, but I enjoy immensely when things like this happen to poor people. Because they aren’t dumb enough to return the money. This is their chance to go nuts. $141,000 fell out of the sky, think they are going to return the money? Fuck no! Strip clubs and bottles on bottles on bottles. It is so obnoxious when they say if you find money on the road you have to return it. In what world? Communist China? Because in this here America if you find something, we have a little thing called “finders keepers”. If you find a 20 dollar bill on the street do you have to walk around asking if anyone lost a 20? Same goes for 141k. The second that jabroni drives away without the bag, it’s fair game. That bag is up in the air for any poor person to stumble upon and do what they want with. If they want to return it, sure, go for it. But if they want to put it in a shoebox and buy lavish things, more power to them.

PS: I can’t feel bad for the ATM guy who left the bag who needed an ambulance called for him because he had a fucking heart attack. I should, but I can’t. His only job is to put the money in the car. That’s it. That’s the job. And he failed. Which almost leads me to believe this was a set up. He purposely did it. He’s in on it. It’s a heist. He gets fired but oops! he has half the bag waiting for him when he gets home. Perfect plan. Shit. I’m a genius.