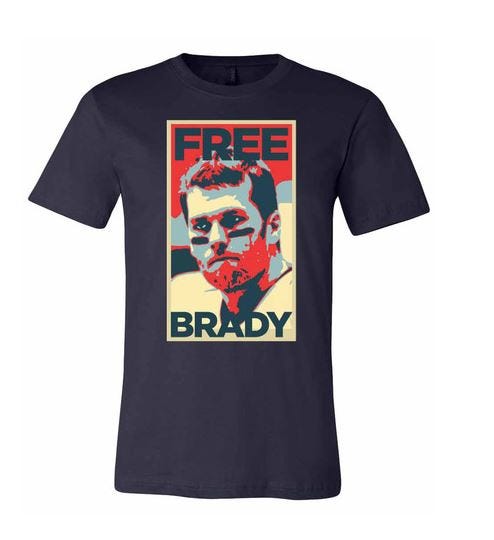 Washpo - About that exploding cell phone. You know, the one that NFL commissioner Roger Goodell seems to think belonged to Machine Gun Kelly and was used in the kidnapping of the Lindberg baby, as well as the Krupp diamond theft. The one that Ted Wells said he didn’t want or need in order to complete his investigation into DeflateGate. The one the NFL’s own investigator said wasn’t necessary to the case. That one.

Wells never asked for Tom Brady’s cell phone, and didn’t require it. “Keep the phone,” Wells told Brady and his agent. He insisted that his investigation was thorough without it. “I don’t think it undermines in any way the conclusions of the report,” he said. Those were his exact words. So were these, after interrogating Brady for more than five hours: “Totally cooperative,” Wells said of Brady’s testimony.

Yet somehow Goodell found Brady guilty of lack of cooperation and willful destruction of evidence on appeal, all because he upgraded to an iPhone 6?

There are two separate issues here. One is whether Brady and the Patriots knowingly softened game balls in the AFC Championship — and it seems clear from the league’s own recent rule changes that it doesn’t have enough evidence one way or the other on that, given its sloppy procedures and the fact that it treated ball inflation as not worth monitoring. The second larger matter is that of the league’s basic due process.

Watching this case closely and curiously is John Dowd, the special counsel who conducted Major League Baseball’s investigation into Pete Rose and got him banned from the game. As a neutral observer, Dowd finds the abuse of process in DeflateGate to be the real scandal. “I still don’t know what this is about. .?.?. Like Seinfeld, this is about nothing,” he said in an email. He called Goodell’s ruling against Brady based on a sudden issue over Brady’s cell phone “an ambush,” and added, “The entire NFL disciplinary process lacks integrity and fairness.”  “They knew and had no quarrel with the non-production of the phone,” Dowd points out. According to Dowd, this compromises the whole matter: Goodell moved the finish line. “The NFL commissioner has denied Tom Brady the fundamental right to a notice of charge and the right to defend against it,” Dowd says.

There is another pattern here – a very unseemly pattern of unethical behavior by the league office under Goodell’s leadership. First, there is always a leak from the league that commands a big headline and gins up public indignation. Next comes a disciplinary hammer from Goodell that makes him look like a hero-protector. But when the excitement dies down and actual facts emerge, it all turns out to be a souped-up overreach.

It happened with the leak of a false report from the league office that 11 of 12 Patriots balls were underinflated by two full pounds of PSI. It happened with the science of the Wells report that would later be shredded. And it’s happened again over the phone. It’s only when you go back and examine the Wells report, and study Goodell’s written decision more closely, that you discover the phone was never demanded as evidence. You also discover Footnote Number 11.

Goodell’s own buried footnote says that during the appeal before him, Brady and his agents furnished comprehensive cell phone records, including records of 10,000 text messages, and offered to help find and reconstruct all relevant communications.

The first instinct on hearing Brady “destroyed” his cell is to blast him for arrogance and stupidity and call him guilty. But then, because it’s Goodell in charge, the questions creep in. Wasn’t it Brady himself who voluntarily disclosed he got rid of his old cell and upgraded? Does it really make sense that Brady would intentionally destroy a phone it was agreed he wasn’t obliged to turn over?

In fact, none of it has ever made sense.

Finally somebody with a brain.  Listen if you don’t have an agenda like Felger And Mazz and you don’t hate the Patriots and you’ve never gotten your brains beaten in by them and look at Deflategate as an unbiased observer these are the only conclusions a sane person can make.  As I’ve been saying from Day 1 with this case, the NFL is corrupt, Roger Goodell is a slimeball and if you can’t see it then you’re just a brainless pawn in his game.    If you don’t believe me believe the Washington Post.