The greatest, highest quality, most dramatic and exciting annual soccer competition in all the land is BACK. Having trouble remembering who is still in it? You ain’t alone. As a quick refresher on which clubs are left and who the analytics geeks at fivethirtyeight believe are the favorites to lift the biggest, baddest cup in the universe: 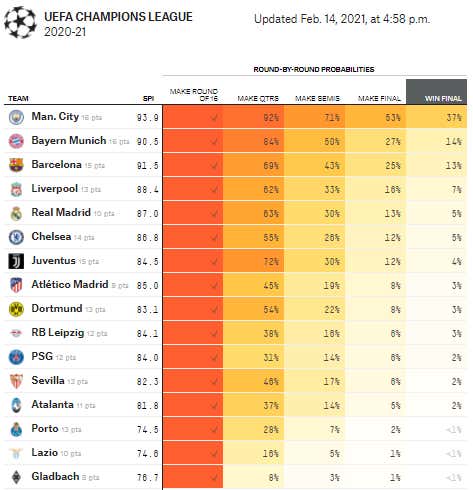 Now sit back, relax, and let Barstool’s self-assigned Sissy Sport Spirit Sherpa enrich your brain and wallet… but only after fluffing your sports boner with the sweet sounds of soccer sex:

The first round of R16 home-and-homes are spread out over the next two weeks, which is cool except for the fact that the two games scheduled each day are being played at the exact same time instead of one after the other. Who is the braindead numbnuts at UEFA/CBS who decided that was a good idea?? 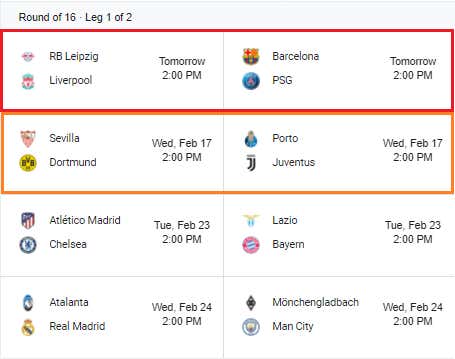 Am I taking crazy pills? Have the bookies watched Liverpool play this season – and especially anytime in the last couple months?? They are not good right now. Lester just exposed them… bad.

VVD ain’t walking through that door. Joe Gomez ain’t even walking through that door. I haven’t seen a ton of Ozan Kabak – and I am even going to give him a pass on his terrible positional awareness against the Foxes because he just showed up like last week – but I have already seen enough to know that he doesn’t have the speed to be the kind of CB that Liverpool would need to play the high line that allows for the high pressing style that helped them win the Premier League last season and Champions League the year before.

I know that RBL is missing a handful of guys as well. I realize this “home” game is actually being played in Budapest. I also acknowledge that Liverpool has the weapons to outgun anybody if they are clicking. But at this point I trust them about as far as ol’ puss-arm Drew Brees can throw them.

Impossible to see this matchup and not immediately think back to this:

These teams are not those teams though… and that is not really a compliment. Barcelona is a pale shadow of the 2017 team – which, truth be told, was a shadow of its previous iterations. At the end of the day Mes Que Un Club has slowly morphed into No Mes Que Messi. They go as far as he can take them, which is actually pretty far based on his dominant performance against Alaves this weekend. However, at 33yo he is still superhuman but perhaps not quite as superhuman as he once was.

PSG come in facing their first controversy of the Pochettino era as the-best-coach-Tottenham-have-ever-and-will-ever-be-lucky-enough-to-employ decided to play Neymar in a cup game against a vastly overmatched second-tier club earlier this month annnnnnnnnd wouldn’t you know it Neymar got hurt.

Not great! So long story short I would have been all in on the Frenchies pulling the upset but Neymar – for all his flippity faults and floppity foibles – is a damn good player and makes PSG a LOT more dangerous. Without him they are heavily dependent on Kylian Mbappe, which isn’t the worst spot to be in, but in a battle of Messi vs Mbappe (when taking into consideration their respective supporting casts) I am still going with the best to ever do it.

Besides, the soccergods love a good narrative and the symmetry of Barcelona running out to a big first-leg lead and needing to defend it against PSG is just a little too tempting.

Sevila head into this game hot like fuego on the back of a 9-game win streak, and yes most of those dubs were against the Huesca's and Cadiz's of the world but it also includes a convincing 2-0 result over Barcelona two weeks ago. The strength of the team is their solid defense and they are likely going to try to slow things down. Dortmund is kinda the polar opposite. They have not been playing well at all – no wins in last two games and only two wins in their last seven – and are in a state of flux with a temporary coach who knows he will be replaced (by Gladbach's manager) in June. Also in contrast to Sevilla, Ze Other Germans love to run and gun, in no small measure as a means for compensating for a leaky defense. So it should be interesting to see which philosophy wins out. I'll go with Sevilla in large part because the front end of home-and-homes are typically a little cagier to begin with, especially since all the murmurings suggest that Dortmund is unlikely to play The Babyjesus Jr. Buncha dummies.

Rule #1: never bet against Portuguese at home in Champions League. Porto have been killing it domestically and looked solid in the group stage, including a scoreless draw against City, but they low key benefited greatly from a great draw with Marseille and Olympiacos both ending up being extremely meh (and that City was not this City). Juventus has been far from dominant in Serie A this season but this is the competition they were built for, and Champions League Ronny and Champions Leagues Westy are a BEASTS. 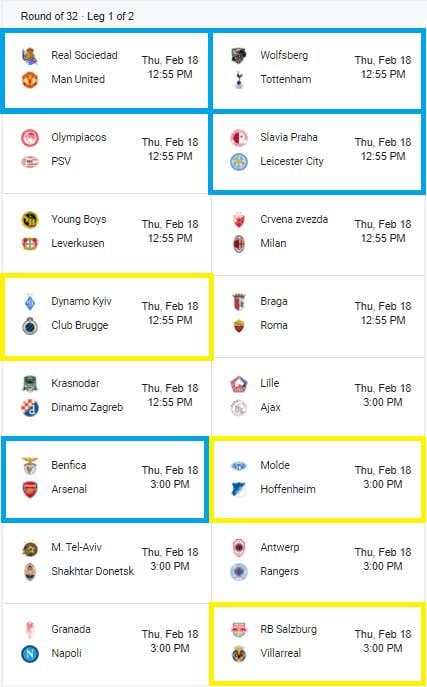