Fair is fair. If you have dunk on someone you have every right to hang your nuts on their head like a little hat. Just know that you're tempting fate if you do that because the same rulebook says that man with nuts on his head has every right to toss your ass to the ground and then hang his nuts on your teammate. You're the one that has to deal with that in the locker room. If I'm Cory Joseph, I'm going right to Chimezie Metu and demanding an apology. Cory Joseph did nothing wrong besides being teammates with Metu here. A simply wrong man, wrong situation with a pissed off Jonas. I love Ja's quote about it all (h/t Commercial Appeal):

"I said we're going to do the same thing they do to us and get the win at the same time," said Morant, who had 16 points and 10 assists. "I mean we're not going to go in a back-and-forth match with teams or anything, we just go out there and try to win. I feel like a win is enough."

That's a teammate you want in the foxhole with you. He saw Jonas get nuts on his head and said alright, it's his turn. Feel like everyone on the Grizzles knew this was going to happen and made sure to let it happen. They only had 3 minutes, you have to respond fast. And Jonas knew exactly what to do. He was hanging on the rim looking for shoulders to teabag: 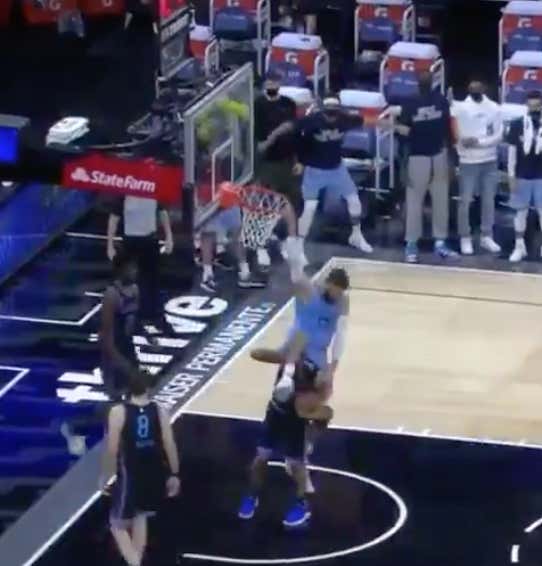 TOUGH look for Metu here who has to stare at Joseph getting in the mix. I'm on both sides here. If you dunk on someone, you get to celebrate. It's sports, it's supposed to be fun. At the same time if you get disrespected - and there are very few things worse than getting someone's nuts hanging on you after a dunk - you have the right to retaliate. Jonas retaliated the correct way, toss him to the ground and seek out a dunk. Just consider this a warning when you play the Grizzlies now. Jonas will throw your ass to the ground and rightfully so.

PS: The Kings wearing 'Sactown' jerseys for this game isn't lost on me. Fucking hilarious with this going on.