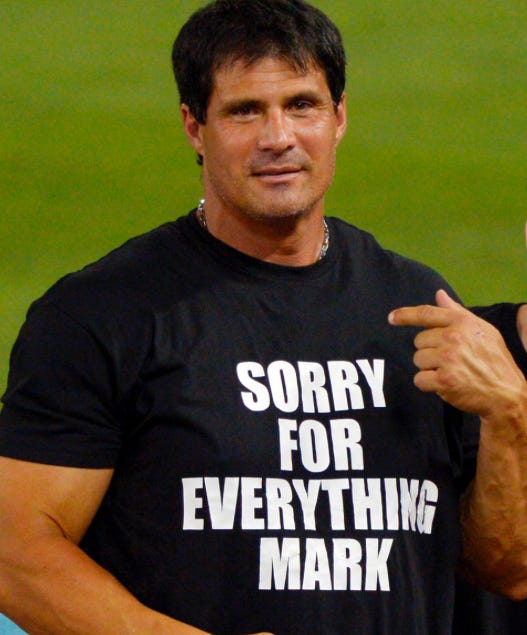 (Source) Just call him Bash Sister. Former MLB slugger Jose Canseco, formerly known as a Bash Brother, says he plans to show his support for Caitlyn Jenner, the former Olympic decathalon gold medalist Bruce Jenner, by “dressing up and living as a woman for a week.”

In his post-baseball life, Canseco has penned a New York Times bestseller (“Juiced”) that blew the lid off baseball’s steroid culture; fought against former NFL player Vai Sikahema (a loss) and “Patridge Family” actor Danny Bonaduce (a draw) in celebrity boxing matches; and famously blew his finger off in a gun accident in his Las Vegas home last October. Now Canseco seems to be taking a stand for LGBT rights, even if he says he was “kind of against” Bruce Jenner’s decision to transition into a woman.

“The only thing I can do is confirm it,” Canseco told the Daily News Wednesday, referring to a TMZ report that reported he would live as a woman. “I can’t say exactly how it’s going to be done yet. It will be done for about a week — it will be on my Internet show called, ‘Spend a day with Jose.’

“Once it’s completely done, I will be dressing up and living as a woman for a week. I’m talking about full everything.” To paraphrase Aerosmith, the dude will look like a lady.

See this is what people don’t understand about Jose Canseco. They look at him and think juicehead psycho with a troubled past. A fame whore looking to stay relevant. A rat that sold out all his friends for short term gain not fully realizing he would be blackballed by everyone in MLB. A guy who fake had his finger fall off for attention. A guy who tweets about random shit and challenges people to absurd contests just so he can be in a headline. A guy who has been arrested for beating women and is an all around scumbag. And all that may be true, but at the end of the day Jose Canseco cares. He cares about Caitlyn Jenner and he cares about the Transvestite community. Why else would he pull a stunt like this? Because he desperately craves relevancy and attention? HA, I think I just disproved that with this blog.