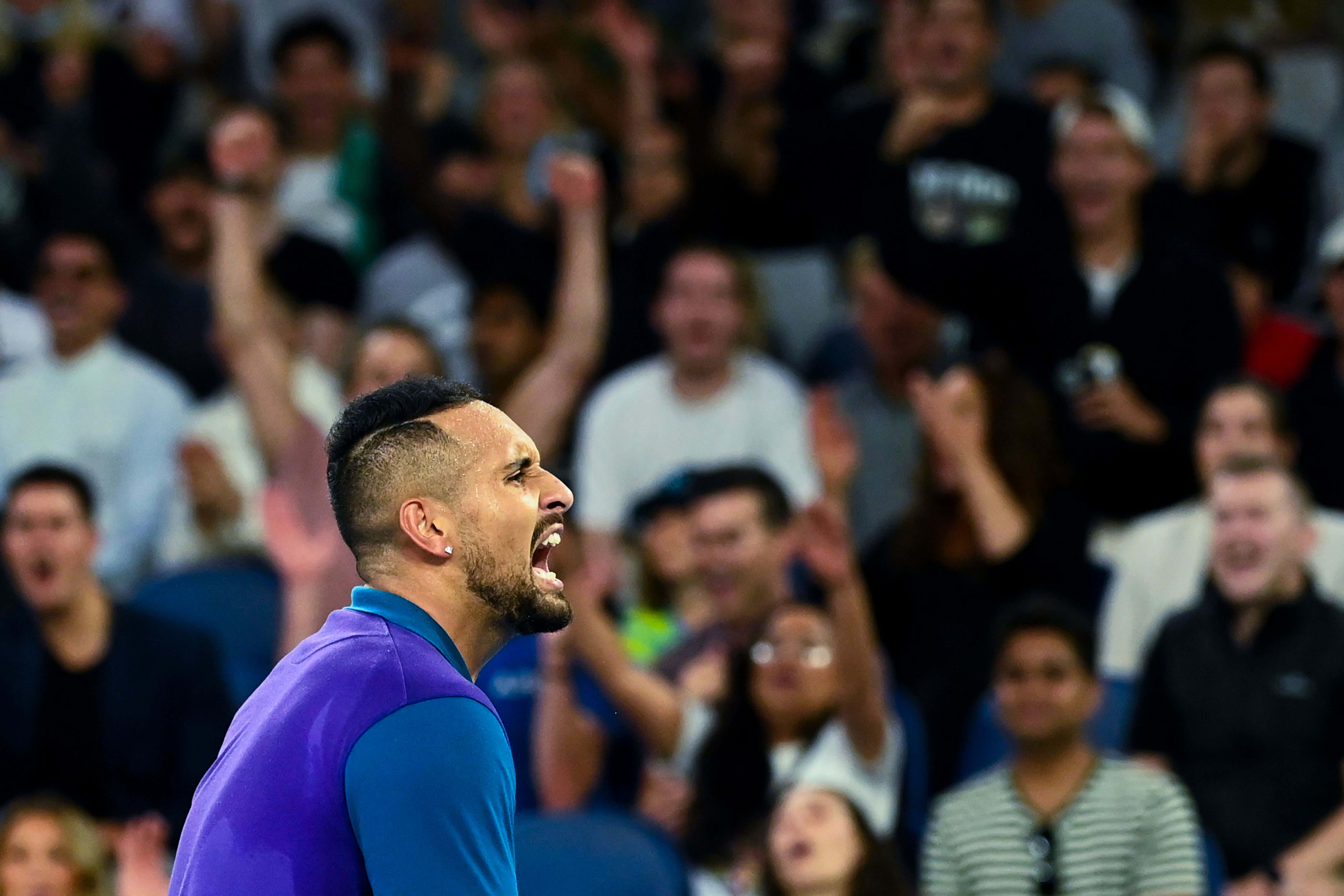 Anytime Nick Kyrgios steps into John Cain Arena in Melbourne, Australia you know you're going to be in for a treat. Now add in the number 3 overall seed Dominic Thiem AND this being the last match before a lockdown would go into place and fans would be barred from the Aussie Open grounds for five days and you REALLY are going to get something special. What Nick Kyrgios and Dominic Thiem just gave us for five sets and just under four hours was one of the more electric tennis matches in the history of the sport. Sounds a bit extreme, but my god if you watched that from start (3:15am) to finish like I just did there was only one way to come away from it: amazed

I pulled an all nighter and it's 10 minutes to 7:00am so forgive me if I just ramble at parts of this as I recap what I just witnessed. A little back story on John Cain Arena first. It's Nick's favorite place in the world. He entered this match 11-2 on it and he gives all the credit to the fans. Unlike the pretty penny you have to drop on a ticket to Rod Laver Arena (where Djokovic played tonight) practically anyone with a grounds pass can get into John Cain. Kyrgios wants the people of Australia to come watch him play tennis so he can put on a show, not the rich folk. He plays for the common man or woman and you have to respect the shit out of that. Certainly was a surprise they put this hyped up of a match on JCA, but I'm happy they did, especially with the lockdown about to be underway over there.

Kyrgios had to start this match fast if he wanted any kind of chance. Any long grueling situation where he'd have to come from behind to take down Thiem was a non-starter. He had to come out serving rockets while also getting in Thiem's head a bit. For two sets, Kyrgios played the perfect match. His serve was unreturnable and if I remember correctly never really had a threat to be broken once. He brought out the under hand serve as well, which I predicted he'd do a handful of times to counter Thiem standing so far behind the baseline on big servers. If he's going to do that, you're well within your right to drop an underhand serve. An old that complains about that and the integrity of the game can go fuck themselves.

Remember when I said Nick had to start fast? Well he broke Dominic Thiem in his very first service game. Don't ask where I'm getting you these highlights. Aussie Open literally doesn't tweet anything out it's insane. I don't understand that in the slightest but whatever country these are from we're going to take.

Anyways, the crowd was JUICED UP and Kyrgios was feeding off it. He served his way cleanly to a 6-4 opening first set. Kyrgios' serve stayed unbeatable into the 2nd set as well. He had Thiem so lost that the Austrian was practically forced to guess where it was going. Not a spot you want to be in versus Kyrgios. He had no answers and the crowd only grew louder and louder.

Later in the 2nd set, Nick got him. These two points were fucking awesome and the crowd was a mad house.

Just a zoo. As electric as it gets. I missed crowds affecting games so much. It sounded like the entire continent of Australia was inside the arena. Motherfucker won the 2nd set with this underarm serve that sent the Aussies further crazy. Mayhem.

The job was not done however. Two sets to the good on Thiem is nowhere near out of the woods. This dude is relentless and keeps coming. He's always trying to figure you out and when he gets cooking you're done for no matter the lead you built. Slip up mentally just once and he leave the door open? Thiem will burst through it. That's exactly what happened unfortunately.

The opening game of the 3rd set is what in my opinion swung the match. With Thiem on serve Kyrgios came out hitting missiles. Balls just hit down each line one after the other. He got himself two breaks points at 15-40 that if converted likely ends the match right there. Thiem dug deep and pulled himself out of that hole for a massive hold. That kinda let the air out of the arena and gave him some much needed confidence that was nowhere to be found for the first hour and a half of this match. Thiem would break Kyrgios for the first time in the next game and went on to comfortably win the 3rd set and stay alive in the match. Uh oh.

From this point on it became pretty clear Kyrgios was not going to break Thiem ever again. In fact at one point in the 3rd and 4th sets Thiem had won 28 straight service points. If Nick was going to pull out this win it was going to be done in a tiebreak. Certainly possible, but with Thiem back in the match he wasn't going to make it easy anymore on the Kyrgios serve. Nick also did very Nick things which didn't help his cause. He started yelling at fans screaming during points. He blamed the head umpire for several things that were out of his control. For those who have seen Kyrgios play, we knew where this was headed. He was no longer locked in and now vulnerable. That's all the Austrian needed to take over. Thiem broke Nick late in the 4th and leveled the match.

Kyrgios came out hot in the 5th, holding serve with ease, but Thiem did the very same. Like I said, he wasn't getting broken again. Nick did whatever he could to keep the crowd in it and they did the very same to him. With the score tied at 3 game a piece in the 5th Kyrgios let a 30-0 lead slip away and eventually was broken. He made it a bit interesting in the final game, but Thiem finished him off with this beauty up the line.

What a fucking match. I don't know if I'm fully giving the feel of how awesome that was for three and a half hours, but damn that was awesome. The first two sets when Kyrgios had everything going and the fans were losing their minds. Haven't seen something like that in sports in quite some time. In tennis I feel like that goes down as one of the most electric matches of all time. That was spectacular and well worth staying up through the night to watch. It's almost fitting Kyrgios goes out with the fans. Would've been weird watching him with no one cheering him on. He needs the fans. He needs John Cain Arena.

Dominic Thiem is a monster. My bold prediction for 2021 is that he finishes the year number one In the world. That match today sure would lead him in that direction. Dude's a menace. As for Kyrgios. I mean when he cares and is locked in he's one of the greatest showman in professional sports. Appointment television. What he can do on a tennis court can put any ass in the seat. I don't care if you've never watched the sport, you'll come away hooked. Obviously there's bad with him too which you saw as he imploded down the stretch, but you take that with all the good he can produce. Guy is amazing for this sport plain and simple.

Well, now it's 7:23 am and I suppose I'll just go about my day now. Thanks for reading over 1,000 words on tennis if you made it this far. Cheers. Here's the full highlights if you wanna jump around.

P.S. American Taylor Fritz just made this a match against Djokovic. Alright more tennis it is!