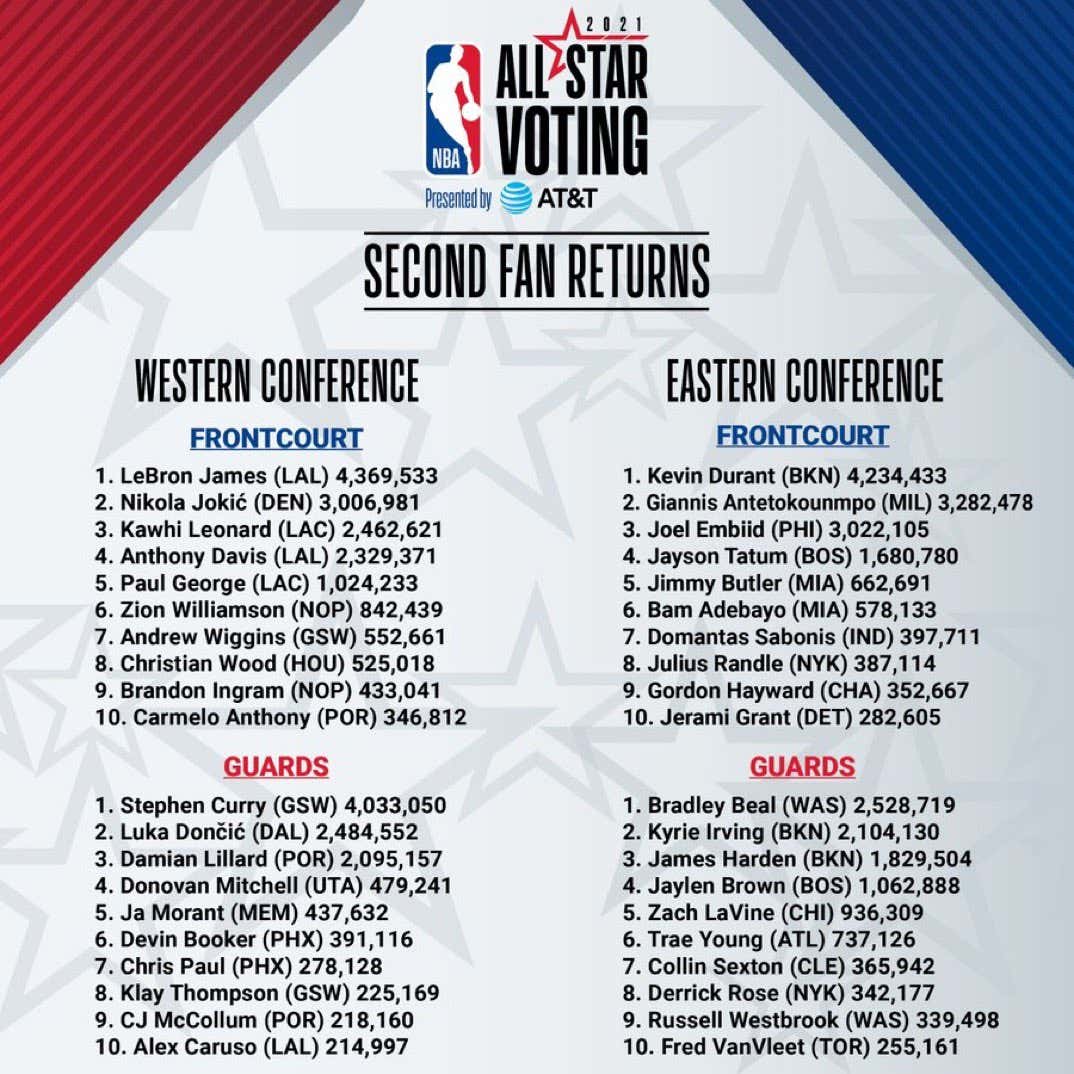 Normally you may have clicked in this blog and expected me to rage about how some Celtic got boned in the fan vote. That is very much not the case. I have no problem with where Jaylen or Tatum sit in this fan vote. Neither will probably be starters and that's fine by me. Shit, with Jaylen's knee issue I don't even want him playing.

So instead, I'm going to speak up for a couple of other fanbases that should rightfully be upset by these most recent fan voting results. I get the league wants fan engagement with this sort of thing, but to give 50% weight to the fan vote is so stupid to me. We see it every year (like last year when Tacko led everyone for a stretch), and as we know when it comes to the fan vote it's a popularity contest as opposed to players that actually deserve it.

Let's start with the East.

The Miami Heat are currently 10-14. Jimmy Butler has played 12 games this season and is shooting 43/6.0% from the floor. You're telling me that he deserves to be in the 5th spot in terms of front court players? Get the hell out of here. He's a great player, but he is NOT having an All Star caliber season. I dunno, how about someone like Khris Middleton? You know, the guy putting up 20/6/6 on 51/45/91% shooting splits? He's not even listed!! How on earth does that make any goddamn sense for a team that has nearly double the wins that MIA does? I'm also not sure why Bam has more votes than Sabonis or Randle, who both have been better this season.

With the guards, what exactly has Derrick Rose or Russell Westbrook showed this season that tell you they should be top 10 in voting other than the fact that they are popular. They sure as shit haven't been better than Fred VanVleet that's for damn sure. You don't see someone like Malcolm Brogdon and his 21/4/6 on 44/38% even listed either. Probably because nobody outside of IND knows who he is, but that's basically my point.

Then we get to the West.

How is it possible that we live in a world where Melo is getting more votes than DeMar DeRozan? Do people think 20/5/6 while shooting 48% from the field is something everyone does? The Spurs and the Blazers are basically tied in the standings too, so that's a little confusing. But Melo is the popular player so there you have it. DeRozan isn't listed!

I don't think I have to explain why Klay/CJ/Caruso are complete jokes. To have three spots taken up by those guys while players like De'Aaron Fox and SGA are nowhere to be found despite having All Star quality seasons would be so infuriating if I were fans of those teams. They are BOTH top 15 in scoring in the West and every single player ahead of them is listed in that graphic. That's so annoying. I would even argue that Ja Morant hasn't even played enough games to truly be considered this year. He's played just 12 as well.

I suppose the good news is that fan votes only account for 50% of the weight to determine the starters and the reserves are selected by NBA coaches. That's big because as we can see here, fans are morons. Even still, I'd much rather have the players/media members have more of a percentage. I'd probably go like 70% players/20% media/10% fans. You could convince me 60/20/20 I guess if you wanted to twist my arm.

Hopefully, the coaches come through and guys like Fox/SGA/DeRozan/Middleton are actually recognized for the amazing seasons they are having. Because from the looks of things there are a ton of fans out there that either aren't watching or don't really care and are simply voting for the popular players. Something tells me that's not changing anytime soon.