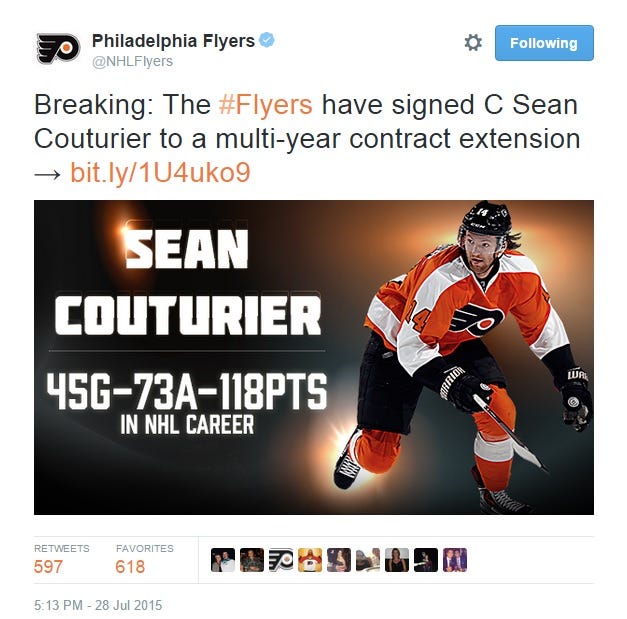 That feeling when you realize that Sean Couturier is signed with the Flyers through 2022:

Pretty big news yesterday that seemed to come out of nowhere when the Flyers and Sean Couturier reached a 6-year contract extension agreement worth $4.33 million AAV. For a kid as young as Coots with as much upside to sign for that long at that price, this contract could potentially end up being a steal. Was Couturier frustrating to watch at some points of the season last year? Yes. Could he benefit extremely from a confidence boost and maybe shoot the puck a little more? Absolutely. But as long as Couturier is able to continue developing under Hakstol, this contract seems perfect on both ends to me. And I know we’ve been saying “Once Couturier develops, yada yada yada” for a while now and we’re still at a point where we need a little more from him. But you have to imagine that playing under anyone whose last name isn’t Berube is going to be a huge upgrade so I like this deal a lot. But with this move made yesterday, and Voracek still needing to get extended as well, I guess it’s time to take a quick look forward to the summer of 2016 because next season is still going to suck ass. 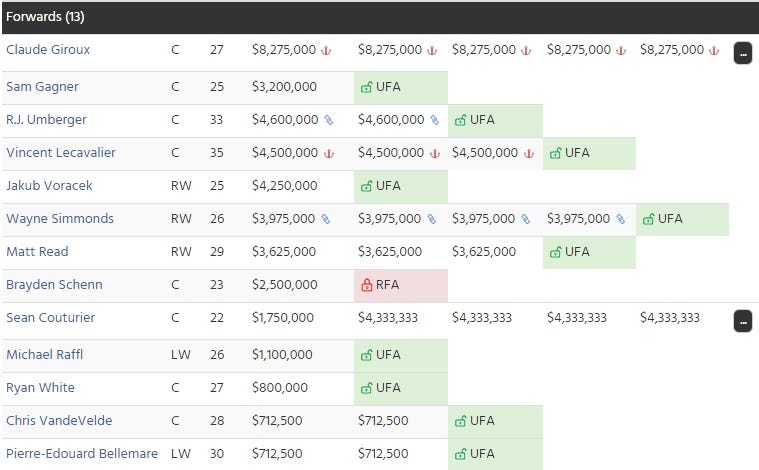 At an absolute minimum, Jake Voracek should be making $7.5 million next season. And the Flyers are basically at the cap right now as is, so hopefully this Couturier extension all but guarantees that the Flyers will be buying out RJ Umberger in the last season of his contract next summer. Umby is a good guy. He was fun to watch in his first stint with the Flyers (except for when he was murdered by Brian Campbell), and his reunion season with the team last year was at least a nice story. But the fact that he still has 2 more years left on his contract makes me believe that Ron Hextall was drunk when he made that trade.

I’m praying to whatever god you believe in that Lecavalier finds a way to turn his game around this season under Hakstol and that some team (cough, cough, Nashville, cough cough) picks him up near the deadline to vet up for the playoffs. Fingers are crossed.

Then we’re stuck with the curious case of Brayden Schenn. What to do with the young Brayden? Personally, I love the kid and as an optimist, I think he’ll continue to find his way playing in a contract year. 47 points last season was good enough to put him in the top 5 on the team. But if for some reason he regresses? Well Scott Laughton and Travis Konecny are just hanging out.

Gostisbehere. Morin. Sanheim. Haag. Provorov. Del Zotto. The only 6 defensemen you need from here on out.

Oh, and I know the Penguins think they’ve had themselves a cute little offseason. Kessel, Bonino, Fehr. Real cute, guys. Just know that we know you’re shitting your pants over realizing you still have to go up against Sean “The Penguin Killer” Couturier for at least 6 more years.

(all numbers via General Fanager)