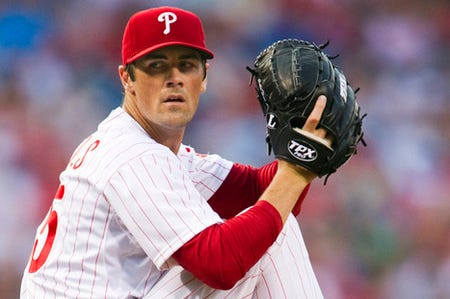 ESPN – The Philadelphia Phillies have told several teams interested in acquiring Cole Hamels that they’d like to get their “best” offers by Wednesday, sources told ESPN.com. The team would then make a decision about where — and whether — to trade him. The Phillies have continued to speak with a large number of teams — a group known to include the Los Angeles Dodgers, Texas Rangers, Chicago Cubs, San Francisco Giants, Houston Astros, Arizona Diamondbacks, New York Yankees and Boston Red Sox — about Hamels.

Count em. 8 teams are interested in acquiring the hottest arm on the market. 8. Over a quarter of the squads in MLB are going to offer their “best” packages today and Ruben has under 48 hours to fuck everything up. I’m actually quite intrigued how Amaro is going to delay a great offer in hopes of getting something more then end up giving Hamels away for some magic beans at the deadline. Because if you know anything about Ruben Amaro and the luck of Philly, that’s EXACTLY what’s going to happen. Oh, and Cole will most likely be the firecracker a contender needs to make a run for a ring and will win another NLCS and WS MVP. That’ll be cute.