Wow. Just really didn’t have it last night. And unlike the night before, this one I was actually feeling good about. Had a core group of guys I loved and entered double the tournaments I usually do, tweaking a few spots here and there, and came out cashing a total of 50 measly bucks. 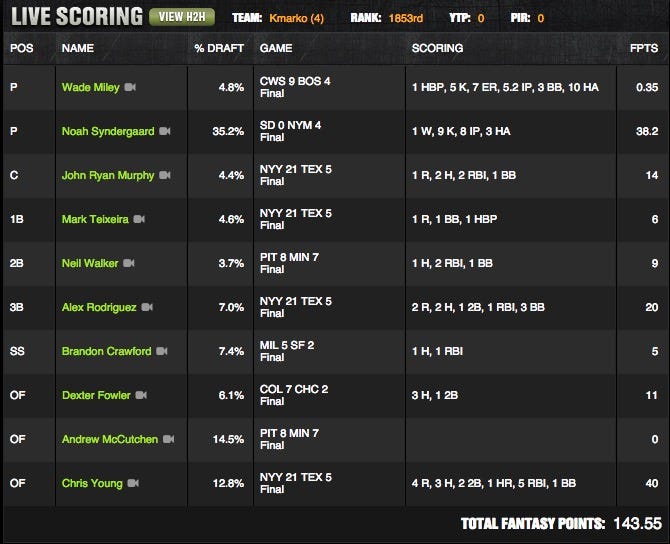 Always the most disappointing nights, when you think you’ve got clear cut games to target and players to roster, and they all put up duds at the same time. Would make a lesser man lose some confidence and maybe back off a little, but not me. Time to TRIPLE down tonight baby. I never have 3 off nights in a row, never.

Also as of post time 2 of my daytime picks have 19 and 21 points, respectively. So things are lookin up.

Kershaw scratched tonight. Now you don’t have to stress over whether you can pay $15K for him…well at least until Saturday or Sunday.

-Tyson Ross has a great matchup on paper and in theory, but the price is high, and the Mets showed they might be on one of their little mini-hot streaks offensively. Use at your own risk.

-Tanaka might be the #2 guy tonight when you consider K upside and the run support he’ll get.

-I like Lackey as a mid tier guy, and Big Sexy ‘Tolo dropping even farther in price against a recently anemic Padres offense

-Tillman looks like your value play special – he’s been on fire and the Braves lineup doesn’t scare anyone. 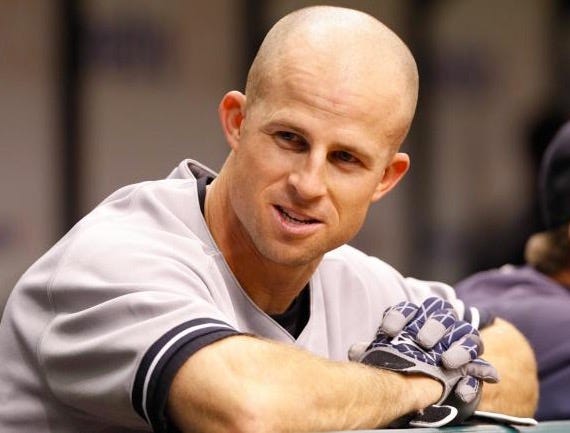 That head shape is ridiculous

Welp, it would appear that you’re gonna want some Yankees bats in this Rangers series. 21 runs last night, you kidding me? Basically if you didn’t have a Yankees stack you had no shot at cashing, which explains why my lineup I posted above is the only one that brought in any money. I think I’m going to roll with Gardner as my top Yankee bat tonight, but you can’t really go wrong with anyone in the top 5 or 6 of the lineup. A-Rod anyone? Ellsbury? 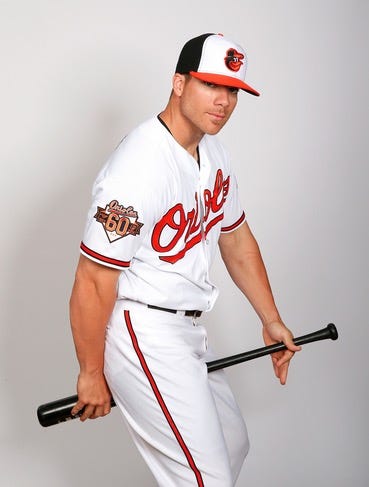 Crush is seeing beach balls out there right now and is on one of his patented hot streaks that we love to target. Not like Foltynewicziskis or whatever the fuck his name is going to scare me off him, so I can see trotting him right back out there again tonight. The Orioles are a top 3 offense to target tonight, along with the Yankees whom I already mentioned and the Blue Jays who burned me BAD last night. Hoping Davis gets hit bat on another one (or two?) and gets us a 20+ pointer.

Like I said yesterday, the White Sox are my new Phillies. Horrible on paper statistically, but when you actually follow them on DFS, they’re putting up major stats. And it’s all centered around these two guys right here, first up being Adam Eaton. Porcello has been surprisingly solid lately but I think the suddenly-hot White Sox put up some runs on him tonight, and Eaton should be right in the middle of it. As should… 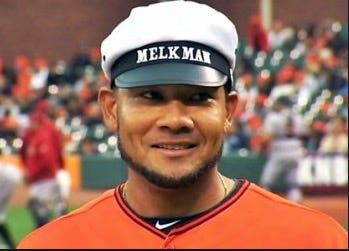 Read: above. 3.8K is an insane price for his recent production and his matchup with Porcello. Fire up the Melk Man.

That’s it for me, feel free to hit me up @kmarkobarstool to chat about your picks and give me some hot tips. I could use them lately.