I was 75% done with a blog talking about what a disaster the Olympics would be in DC. How the Metro doesn’t work at all, ever, how we have traffic 24 hours a day, 7 days a week, no matter what. Take 66 at 3am, you’re in bumper to bumper traffic. I wrote about how logistically it just doesn’t make sense and how while the Olympics are fucking awesome and I love them, they should just take them somewhere else. I’ve had this opinion since DC started making a run at the bid a couple years ago. But then it just hit me– traffic will still suck. The Metro will still suck. The weather will still be 150% humidity. So fuck it, let’s have the Olympics. Let’s build huge new stadiums and get some potholes fixed in the mean time. I mean what do we have to lose? A few tax payer dollars? That’s why we made weed legal. Just use the weed money to pay for the Olympics and voila, problem solved. Sure it will be a complete clusterfuck from the time they start construction to whenever it ends. But we have land and we are Washington Fucking DC. The most important city in the world. Shit runs through us. So imagine the Olympics with the Washington Monument in the background. Bald eagles flying all over the place (we’ll work on making that happen). And America winning every god damn medal possible. Sure if you have to commute to work during the Olympics you ass is grass, might as well set up a cot under your desk. But whatever. Less time with your stupid wife and kids, look at it that way. Sorry, can’t make it home today, the marathon is running today. And BOOM! you’re at the bar. So I’m all in for the 2024 Olympics. Have it here in the Nation’s Capital. The World’s Capital. Washington 2024, chooo choooooooooo. 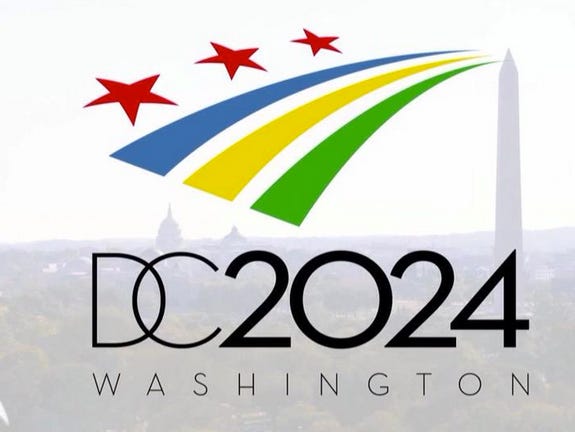