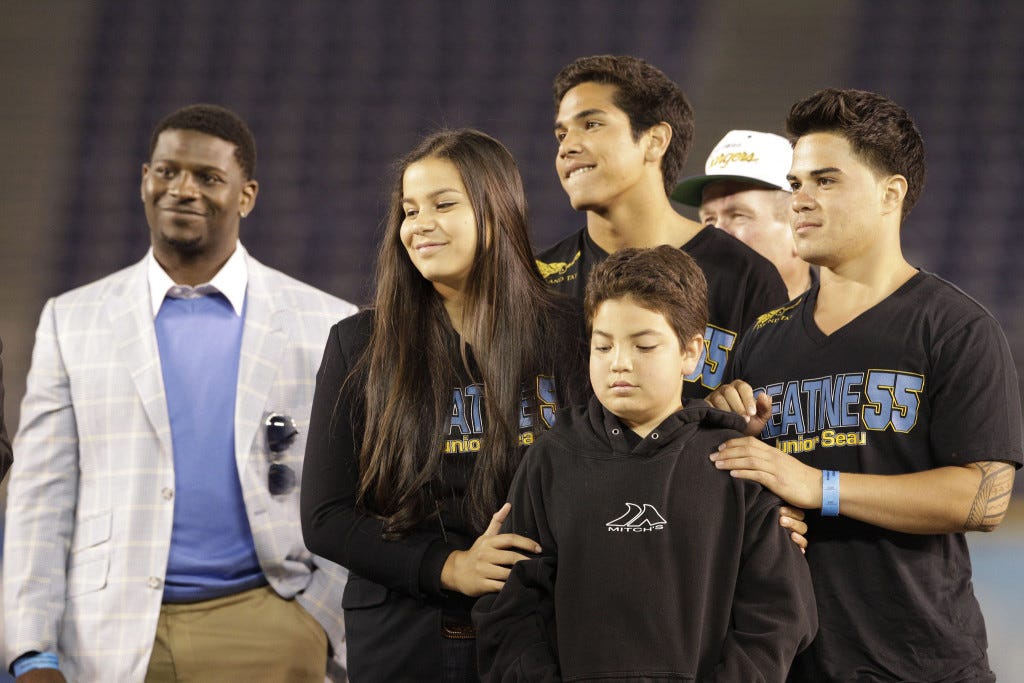 NYtimes – The family of Junior Seau reiterated its stance Monday that his daughter, Sydney, should speak live and in her own words at her father’s induction into the Pro Football Hall of Fame next month. “Contrary to the most recent statement by the Hall of Fame, the family does not support the current policy that prevents family members from delivering live remarks on behalf of deceased inductees,” Steve Strauss, the family’s lawyer, said in a statement. Last week, the family said it had been blindsided by the Hall of Fame’s decision to show only a video of Seau at his enshrinement ceremony Aug. 8. After Seau was chosen in January for induction, the family said, it was told that Sydney could speak. On July 9, though, the Hall of Fame told the family that its policy for deceased inductees, a rule in place since 2010, was to honor them with only a video, with no one allowed to speak afterward.

After the family voiced its displeasure, the Hall of Fame published its policy on Friday. The next day, David Baker, the president of the Hall, said in a letter that officials had spoken to the family members and that they supported the policy. The Seau family has filed a wrongful-death lawsuit against the N.F.L., seeking to receive money equal to what Seau would have earned if he had lived. The news that Sydney Seau would not be allowed to speak for her father, as he had wished, spurred an outcry among fans in San Diego, where he played much of his career. Some critics say the Hall is trying to silence the family because Junior Seau committed suicide in 2012 and was later found to have had a degenerative brain disease linked to repeated hits to the head. In its statement, though, the family said it “never intended to use the Hall of Fame as a platform to discuss the serious mental health issues facing the N.F.L. today which are most appropriately addressed in a legal forum.”

You know what you can’t do right now if you’re the NFL? You can’t let the social outrage choo choo train change tracks and head for CTE’s. It can’t happen because if and when the momentum shifts that way, you open yourself to hundreds and hundreds of lawsuits from former players and by extension, their families. If I’m in the NFL’s legal department I’d way rather be dealing with justifying pounds per square inch measurements than quantifying how the blunt force trauma from a head to head collision may have eventually been related to a player committing suicide. Violence, suspensions, PAT and going to the ground rules…. They’re nothing. Everyone needs to understand that the CTE conversation is inevitable and incredibly worrisome for the NFL. Basically every other issue the NFL faces is trivial compared to the fact that players’ brains are leaking out of their heads and they may seek compensation for all that mush. So keeping the focus away from concussions and focusing on literally anything else is the only PR move there is.

The NFL simply can’t afford a video of Seau’s daughter bawling next to her dad’s bust while discussing his suicide and his health issues. That’s a PR nightmare that makes everything else that’s gone down in the last year trivial. Do you think parents stop telling their kids to play football because Ray Rice beats his wife or AD beats his kid or Greg Hardy RKO’s his girlfriend? No. Because what does that have to do with THEIR kids? Their kid couldn’t possibly become that. But you show me one mom in the world who wouldn’t pull their son off the football team because they’re worried that their future grandaughter will lose her dad because of the sport. That’s what the Seau family speech had the potential to become.

CTE’s can kill football as we know it. Whether it’s the owners getting buried in lawsuits, the rules changing the game entirely, or the sport dying out because nobody wants to put their child in a position that may damage their brain. They all spell some kind of death for the football we know and love today. So everything not CTE’s is a lesser evil right now. While Goodell is “incompetent” and we try to figure out if smoking weed is worth as many games as punching your wife, nobody’s talking about the dead guy missing his Hall of Fame induction ceremony. And the NFL certainly isn’t going to let the man’s family have an open mic to change any of that. And don’t bother telling me that that’s bad PR because I’ve read 100 more articles on atmospheric pressure and how it relates to a football lately than I have on concussion related suicide.